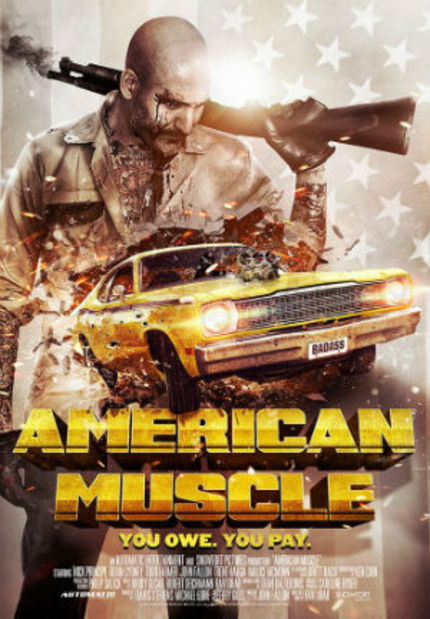 Imprisoned for 10 years, he's about to be paroled, but his prison sentence hasn't mellowed him one iota. If anything, it's made him a more fierce creature, the personification of fury, refusing to compromise on his core principle of life: "You owe, you pay."

Smashing, bloody, rude, and often nude, American Muscle captures the rowdy spirit of 70s exploitation movies and transfers it wholesale to the present day, while also instilling a dose of rueful, personal nostalgia. Make no mistake, American Muscle is first and foremost a movie about an incredibly uber-macho, extremely violent criminal -- c'mon, he's named John Falcon! -- and the blood he sheds without remorse in his quest for vengeance.

As embodied by the brawny Nick Principe, John Falcon is a bruiser who would never ever imagine that he's a loser. Puffed up by his muscles, his fists, and whatever weapon he can lay those hands on, he is determined to track down his brother Sam Falcon (Todd Farmer), the man he holds responsible for his imprisonment after a robbery gone wrong. John Fallon's original screenplay lays out a clear path -- let's call it A to D -- upon which John Falcon follows, first locating, then fighting, and then killing all suspected accomplices.

But what sets American Muscle apart from and above the usual exploitation fare that crowds the home video shelves (electronic though they may be) is its self-aware modesty and simultaneous refusal to play down to those limitations. Director Ravi Dhar, who also served as director of photography, embraces the stereotypes of exploitation -- as already noted, the film is filled with tough, hard violence, along with ample and frequent displays of female flesh -- without giving in to the nostalgic impulse visually.

So, unlike Grindhouse, for example, American Muscle doesn't feel the need to remind constantly of its exploitation origins via scratches and fuzzed-up imagery. That also allows for the natural (rough) poignance of Falcon's memories with his true love Darling (Robin Sydney) to stand out. She's a drug-addicted, drug-savaged beauty who remains his primary motivation for revenge. John knows that she has taken up with his (now) no-good brother Sam, but that hasn't dampened his love for her.

Dhar and his fellow editors Robert Deichmann, Brody Gusar, and Mike Scantlan toss around these elements while pressing the pace forward. And the action takes full advantage of desert locations in Southern California; my favorite was an armed shootout at a sandy playground filled with slender metal objects that provide absolutely no protection from the bullets fired back and forth. It's silly, even ridiculous, yet somehow works extremely well within the context of the movie.

That scene is a fitting representation of American Muscle as a whole. Within a limited palette, it's extremely colorful, brutally efficient, and a lot of fun to watch.

The film screened recently at the 2014 Morbido Film Festival. In the U.S., it's available to watch via various Video On Demand platforms; visit the official Facebook page for more information.

Do you feel this content is inappropriate or infringes upon your rights? Click here to report it, or see our DMCA policy.
Nick PrincipeRavi DharRobin SidneyTodd Farmer