Los Cabos 2014 Review: FOR THOSE ABOUT TO ROCK: THE STORY OF RODRIGO Y GABRIELA Salutes The Mexican Guitar Duo 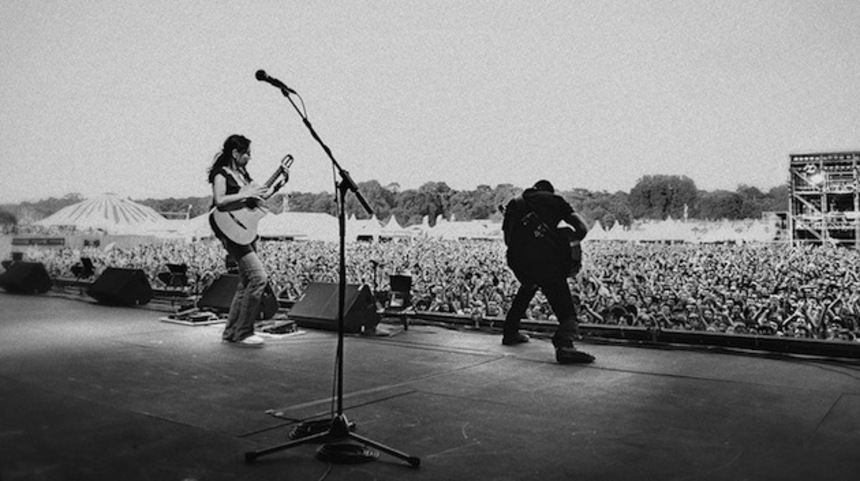 For Those About to Rock: The Story of Rodrigo y Gabriela is a straight celebration of Mexican guitar duo Rodrigo and Gabriela, going from their origins in Mexico City to their eventual worldwide success.

Mexican journalist and the documentary's director Alejandro Franco begins the film as a personal story, narrating how and when he discovered the band. But Franco ain't for Rodrigo and Gabriela what Cameron Crowe is for Pearl Jam, so after telling the audience that he was blown away when he saw the band playing live, he really has no more to share as a narrator. Franco then allows both Rodrigo and Gabriela to tell their own story.

It's definitely unique, though it's also not rare to have a case of Mexican talent leaving their country in order to fulfill their dreams. With some minutes dedicated to explain the background of rock music in Mexico, featuring very brief appearances by director Olallo Rubio and journalist Ivan Nieblas "el Patas", Franco's doc indicates that the government repressed the rock movement back in the late sixties and early seventies but that eventually, a new wave of rock in Spanish appeared in the eighties (bands like Maldita Vecindad y los Hijos del Quinto Patio and Argentina's Soda Stereo).

In a way, Rodrigo and Gabriela's early years, as part of a Metallica and Testament-influenced metal band, resume that rock music in general in Mexico is not the best way to try to make a living. But their journey also strikes as one of two adventurous young kids, determined to go for their dreams without ever looking back. Mexico is, after all, just one place, and they were ready to rock the entire globe.

This fantasy story also confirms that pretty much every successful person had to travel a long way before gaining any recognition. Talent is one thing, but it wouldn't do much without hard work, especially for two Mexicans going through Europe with the clear objective of playing music but with a daily dose of uncertainty as well.

Curiously, this is a doc that for the most part doesn't offer a real taste of the guitar duo's music. Some of their tunes are used as background music (just like Joe Strummer and Silvio Rodríguez's), but the newcomers - like myself - will have to wait almost until the very end to see actual footage of the band in action (two back-to-back full performances show their great craft).

Like the title suggests, this is really just their story, and since they are pretty much still a young band, there's not much to tell once the success part appears. When they begin playing bigger venues in Europe and actually sell records, it all feels more like a fast resume, with short bits of such famous musicians as Metallica's Robert Trujillo and Peter Gabriel simply praising the Mexican band.

The centerpiece here is definitely the struggle part, and in the end, it's an ode to street musicians, as the film focuses on Rodrigo and Gabriela's years of playing live music in the streets of Dublin, Denmark, and Barcelona. That's the heart of this effort, how they literally changed the street for the stage of an immense music festival like Glastonbury.

Aside of that, there's stuff about the Irish scene in which they emerged, behind the scenes moments, and of course some revelations (i.e. how Gabriela's unique guitar playing style came from her inability to play flamenco). For Those About to Rock: The Story of Rodrigo y Gabriela is a very simple documentary, pleasant if you will, but has enough material to keep fans and newcomers interested.

For Those About to Rock: The Story of Rodrigo y Gabriela