Destroy All Monsters: Wonder Women Can't All Be Mockingjays 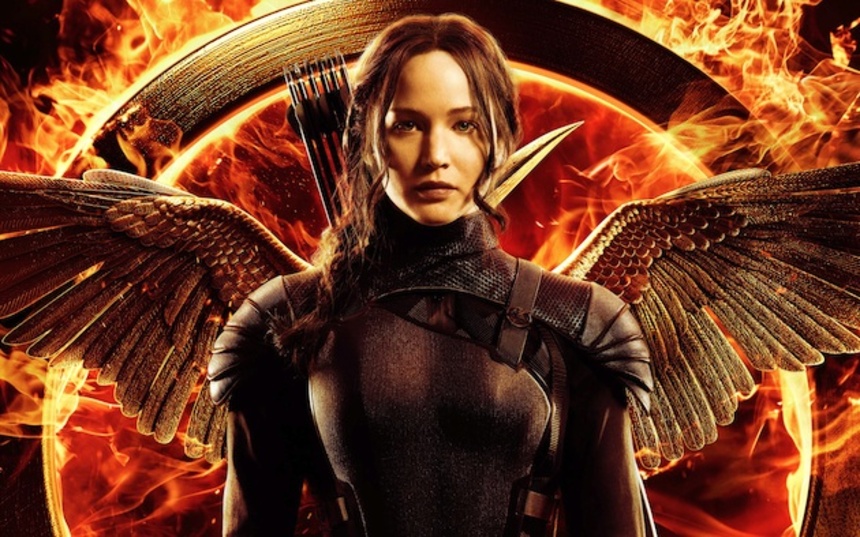 Please refrain from adding book spoilers in the comments for this piece, for the benefit of those who wish to see next year's Mockingjay conclusion fresh.

One of the things I enjoy about The Hunger Games movies are their ability to comment subtly upon themselves, which continues with the latest entry, Mockingjay Part One. Katniss Everdeen - who is, in every way, the standing prototype for the empowered heroine of a modern major cross-demographic movie franchise - is unconvincing in her early conversations with President Coin about becoming the symbol for their revolution... until Katniss gets good and pissed off, at which point Plutarch Heavensbee calls for a freeze-frame, mentally adds some background smoke and blowing wind, and declares that that's their symbol.

She's ceased to be Katniss and become the Mockingjay, a market-created, broadly-appealing, arrow-toting icon of "we have had enough of this shit and we are changing it." That she happens to be so cinematic in that regard works out well for everyone, both within the film and without.

That Katniss, as a character within her film, is a symbol for revolution is not lost on the filmmakers who are aware that Katniss, as a character outside her film, is viewed much the same. We are all leaning on Katniss to prove out a longstanding theory that male-dominated blockbuster cinema is a false positive: that roughly 53% of the target market for tentpole event film, or even the whole 100%, might not actually require a male hero in order to invest their interest (and money) in a franchise prospect.

This works for The Hunger Games because, much like Buffy the Vampire Slayer, Katniss Everdeen seems to have been designed to be the exact sort of icon she has become. She is a response, a counter-text; a whole-cloth creation of a new sort of hero for movies that reverberates based on our knowledge of the cultural contexts in which her story is playing, and with which it continues to play.

But alongside the success of the Katnisses and the Elsas and the Sandra-Bullock-in-Gravitys - alongside, essentially, the late-arriving awareness that female-lead blockbusters are a major, viable pipeline in an industry struggling to find new property with which to differentiate itself - lurks the danger of the self-consciously-created demo movie.

In a way, it's inevitable at this point, as studios clunkily attempt to exploit what they see as blue ocean in the movie landscape. But reductive thinking is reductive thinking, and we need to be cautious about what comes next.

Yesterday, Michelle MacLaren signed to make Warner Brothers' Wonder Woman movie, for example. This is wonderful from a standpoint of MacLaren being a generally excellent television director who is worthy of a shot at big screen franchise-making, if that's what she wants to do.

It's less wonderful from a standpoint of Warner Brothers intentionally hiring MacLaren (or any woman) to direct Wonder Woman because they figured they oughta get a female in there in order to give themselves some ersatz credibility with a target demographic for whom they are factory-pressing movie projects, because it will improve their ability to exploit that demographic.

In fact, three of the four major comic book mega-franchises - Disney/Marvel, Sony/Spider-Man, and Warner Brothers/DC - simultaneously announcing (officially or unofficially) their interest in pursuing the first female-lead superhero movie since Catwoman reeks of stunt. Where previous blockbusters might be greenlit based on a broad range of market-guaranteeing "hooks" - Batman fighting Superman, the further adventures of Gandalf the Grey, or the mere popularity of a book series like The Hunger Games itself - the foreground "hook" for Wonder Woman, Captain Marvel and the untitled female Spider-Man project seems very much to merely be "woman." Which, by its very exception status, demonstrates how far we still have to go.

The schmucks behind The Lego Movie were even more brazen about it last week, assuring their fans that Lego Movie 2, in effect, "will have lots more women in it, cuz girls." It's condescending, and this kind of thinking runs the risk of turning all these characters - all these projects, by extension - into Mockingjays themselves, constructed marketing pegs upon which to hang the conversation of the conflict, beneath which is simply the money. (President... uh... Coin? Really?)

There's an extent to which this phase is inevitable in the widening of terms of what is culturally possible for these kinds of properties. I'm happier that The Hunger Games, Maleficent and Frozen exist and are spawning copies than I would be if they did not and Marvel Phase 3's sole concession to wider representation was the T'Challa movie. Next year's Cinderella will be gargantuan for interesting reasons, and that's not a bad thing; and I can fantasy-cast Captain Marvel till I'm blue in the face based solely on the strength of Kelly Sue DeConnick's current run on the character in the comics, and come away with any number of Hollywood up-and-comers who deserve much more from their careers than playing female lead in men-driven blockbusters. (Cough - Emily Blunt - cough.)

The risk merely lies in turning these movies into a dumbshow of themselves, based on how cravenly they pursue their own outsider status as anything other than "lots more women in it, cuz girls." Creating cultural change at the blockbuster level will require more than A/B thinking. For now, as Plutarch Heavensbee remarks in Mockingjay Part One, "It's a little on the nose - but of course, so is war."

Do you feel this content is inappropriate or infringes upon your rights? Click here to report it, or see our DMCA policy.
Michelle MacLarenMockingjayThe Hunger GamesWonder Woman

More about The Hunger Games: Mockingjay 1