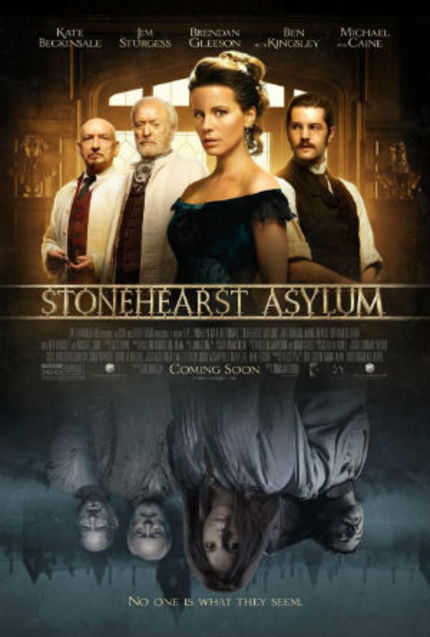 Despite a cast that includes Ben Kingsley, Michael Caine, and Kate Beckinsale, and a noteworthy director in Brad Anderson, Stonehearst Asylum feels like a high-class 1970s TV movie.

Anderson remains in my mind as a director of independent genre movies like Session 9 (2001), The Machinist (2004), and Transsiberian (2008), but he transitioned (mainly) to television years ago. That's not entirely a bad thing; Anderson's recent credits as producer and director include the enjoyable science-fiction shows Fringe and Almost Human. Yet it's a reminder that even an experienced helmer and a game cast cannot make up for an anemic script.

Adapted by Joe Gangemi from Edgar Allan Poe's short story "The System of Doctor Tarr and Professor Fether," first published in 1845, Stonehearst Asylum moves the action to the end of the 19th century. Edward Newgate (Jim Sturgess) arrives at the titular facility and identifies himself as a recent medical school graduate. He is welcomed by the asylum director, Silas Lamb (Ben Kingsley), and introduced to the patients. Newgate is puzzled by their treatment; rather than following accepted, and very strict, procedure, they are treated with kindness and encouraged to do as they will, without any attempt at "curing" their mental illnesses.

Newgate expresses his reservations, which are waved away by Lamb. He also comes into conflict with the rough-hewn Mickey Finn (David Thewlis), and is captivated by the sight of Eliza Graves (Kate Beckinsale), a distressed beauty who dresses elegantly and plays piano with a soothing grace.

But, inexperienced as Newgate is, something about the asylum and the patients and the staff doesn't seem quite right to him, a suspicion that is confirmed when he ends up in the basement (i.e. the heart of spoiler territory). From there, Stonehearst Asylum becomes more complex, plot-wise, and raises the stakes for all concerned.

The temperature of the picture, however, never rises. It's content to simmer until it boils away all suspense, leaving only the suggestion of something more complicated, complex (thematically), and compelling. It's a curious development; I enjoyed watching the movie, felt pleasantly surprised by the narrative twists -- I'm easy to fool, evidently -- and grooved on the sincerity and depth of emotions offered by the entire cast. Ben Kingsley, especially, rises and expands and threatens to eat all the other characters (in effect), charging up much of the othewise empty space surrounding him; likewise, Michael Caine gives the story a good kick in the pants with some furious talk.

These minor pleasures are short-lived, though perhaps that's to be expected for a movie that is not terribly ambitious nor entirely engaging. Although I paid careful attention throughout, I imagine it would be easy enough to pick up on what's happening if you happened to nod off. Considering all the talent involved in Stonehearst Asylum, I was hoping for something more than a pleasantly dark time-waster.

The film opens in select theaters throughout the U.S. on Friday, October 24. It is also available to watch via various Video On Demand platforms. Visit the official site for more information.