Review: INTERSTELLAR Is a Breathtaking Marriage of Ambition and Heart 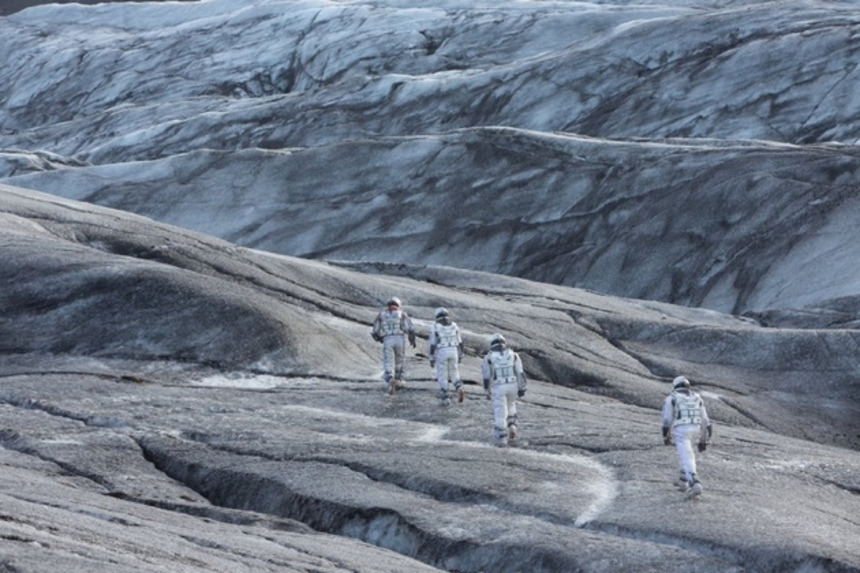 While spectacle is easy to come by on the marquees these days, as blockbuster sequels and redoes each try to one up each other, we are seldom treated to something that is new and truly special. With imagination, ambition, heart and quite frankly a big pair of balls, Christopher Nolan's Interstellar positions itself to be just that.

In the near future, humanity finds itself on the brink of extinction as its crops begin to die out. Cooper, a former pilot, lives with his two children and father-on-law on a farm. By chance, he stumbles on coordinates that lead him to a group of people intending to save the human race. They ask him to man a flight through a mysterious wormhole, in search of a new, liveable world. Not knowing how long the journey will take, or if he'll even make it back alive, Cooper faces a difficult choice - a chance to save humanity, or stay with his family.

At nearly three hours and with some high-minded meditations about what it means to be human, Interstellar is not merely ambitious, it's dangerously close to being self-important. What's more, with ample parallels to Kubrick's 2001, it makes no attempt to hide its lofty aspirations. Yet, beyond the self-seriousness and boldness of the film's vision, there also lies a big heart. In fact, it's the first time that Nolan's work has really struck an emotional chord, and the ring of that pluck reverberates throughout the whole film.

Let's be clear, Interstellar is not 2001. Though it takes its cue from the sci-fi classic, Nolan's film shies away from allowing room for interpretation. It doesn't pose big questions so much as it nestles its answers as a nexus of inevitable conclusions within the admittedly tight confines of its exceptionally tidy script. Instead, it's a story about a father who left his daughter behind. The epic space journey to save humanity is riveting, but as the grand backdrop to an emotional story about the perhaps unbridgeable chasm between two characters, it becomes breathtaking.

Continuing the much publicized McConaissance, leading man Matthew McConaughey delivers rusty musings about the importance of discovery with a gravely cadence that isn't always easy to decipher (much like his rants in True Detective, as well as some of the dialogue in Nolan's last film, The Dark Knight Rises), but his performance as the everyday dreamer who is foisted with the fate of humanity is the centrepiece of the film's emotional ballast. The consternation and uncertainty written all over his face as he leaves his family before his journey is nothing short of heartbreaking.

Continuing Nolan's uncertain run with female characters is Anne Hathaway's problematic scientist, whose emotional vulnerability poses significant obstacles during the space voyage. Far better, and the other half of the story's emotional core, is Cooper's daughter, played by the impressive Mackenzie Pryce as a young girl and then a terrific Jessica Chastain as an adult. Beyond them, John Lithgow and Michael Caine (his sixth time with Nolan on the trot) both play imposing patriarchs while Topher Grace seems an odd casting choice in a minor role and a major star cameo at the halfway point is potentially disruptive.

Much like last year's Gravity, Interstellar is a technical marvel that pushes the boundaries of the medium. With stunning visuals, thrilling set pieces and some of best sound design on record, it's a spectacle that screams to be seen on the biggest possible screen (book now for IMAX). Though Nolan's long-standing cinematographer Wally Pfister was off filming his debut Transcendence, Hoyte Van Hoytema stepped in to provide lucid photography, comfortably oscillating between rich and intimate on earth, and stark and awe-inspiring in space. Beyond Richard King's immersive sound work, which goes from dense, claustrophobic rattles to eerie, almost silences, Hans Zimmer provides what might go down as one of his greatest scores, though it owes much to the Strauss compositions that are now forever associated with 2001.

As a conflation of art and commerce, Interstellar should be celebrated as a blockbuster that strives for originality, despite overreaching at times. Admittedly, few filmmakers would be provided this kind of a berth but Nolan, keenly aware of what is required of a film of this size in today's film market place, delivers the goods with a canvas that is both breathlessly expansive and enormously affecting. A bold triumph for the heart, mind and eyes, Interstellar is one for the ages.
Tweet Post Submit