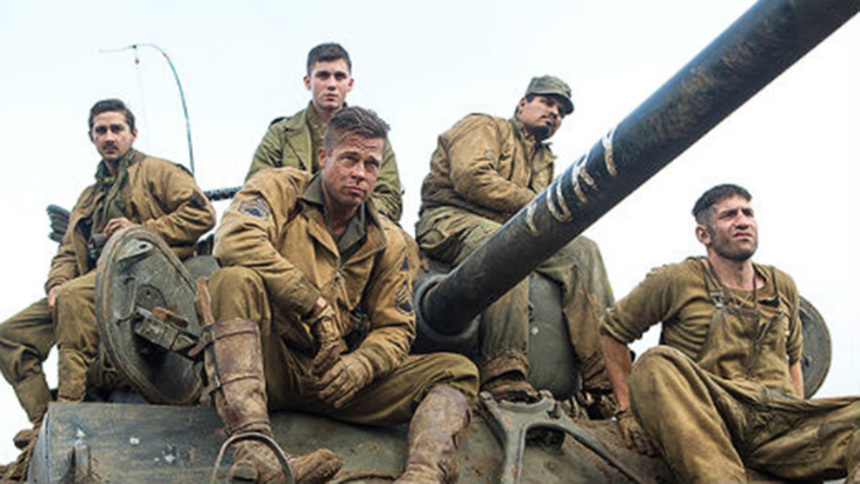 I found myself liking Fury almost against my best judgment, ignoring some of its overt flaws in favour of enjoying the ride.

It might be because I'm a sucker for claustrophobic battle films. It may have been Das Boot or Star Trek II: The Wrath of Khan that first gave me those chills, but the notion of telling a story with the heightened action of life-or-death battle, combined with a claustrophobic setting, provides a raw kind of thrill.

Plus, the notion of tank battles has long fascinated me. A tank is an impressive weapon until it's not, a rolling steel fortress that seems immune to all attacks until it's suddenly vulnerable, rendering it a sitting target. Some of the most taut moments in Saving Private Ryan involve tanks from the outside, as scurrying GIs outwit the rolling, road-wheeled dragons with their anthropomorphic snouts breathing fire and destruction.

Fury is at its best when it gets these feelings right, the dichotomy between the power of the weapon and its implicit vulnerability. It's a brutal film, uncompromising in its violence and gore. I'm betting many in the audience will be put off by the sheer horror of some of the sequences, a barbarity on screen that makes much of Steven Spielberg's Saving Private Ryan seem almost tame. There's a scene were a man's face is unceremoniously draped on the metal of a tank, the sliver of skin lying there like a macabre omelette. This is WWII as it's rarely been shown before, and, if for only for that ambition Fury is a film work seeking out.

The horror show is buttressed with attempts at crafting deep characterizations. The crew, hardened by battle, provide another paradoxical dichotomy, clearly both loving and hating one another, willing to die for one another, yet detesting their comrades at the same time. Talk of war being the best job ever is both sarcastic and truly felt, as the living on the edge clearly is an intoxicating feeling, the body's endorphins flowing freely at the realization that another day has been survived.

Brad Pitt is excellent in a way that's to be expected, different enough from his Inglourious Basterds role to make things interesting, but still highly charismatic. The film goes out of its way to keep that million dollar smile intact, even in the face of almost farcical danger, but that's at least understandable from a marketing perspective alone.

The rest of the ensemble is strong, including Shia LaBeouf in a role that's great for him, one of intensity and subtlety but not one that dominates the film. He's an excellent supporting actor, and one can hope in time that some of his more risible actions off-screen will be forgotten and we can see performances from him completely free from any tabloid drama. Logan Lerman plays the everyman soldier pretty well, while Jon Bernthal brings the crazy to the fore. Michael Peña does his thing, but despite being the driver of the tank, he probably has the least amount to work with, script-wise.

As for writer/director David Ayer, I can safely say this is my favourite film of his that I've seen. The action sequences are for the most part very well executed, and moments of conversation seem well within keeping of the overall tone of the film. The movie goes through several phases; it's first as conventional as you might fear it to be, then reaches a point where it's surprising you, taking you in directions that are darker and more complex than you'd expect from what on first blush could be confused as a mere jingoistic war film. The film does slip at times past this point, reverting back to cliché and sacrificing originality for a convenient act structure.

Still, when it works, Fury manages to impress. It'll be a hard film to stomach for many - casual audiences repulsed by the gore, and the cinephiles dismissing it as populist trash - but between these reactions, I think there's something here. Fury is a provocative film that better than most shows the ambivalence of war, an often brutal and bombastic account that still strives to be more than just a series of explosions and one-liners.

There's an ambition to the film I appreciated, but more than that there's a sense that it refuses to be chaste, going all-in at times in ways that for studio pictures are often surprising. There's a heart of a European art film beating within this tale, and it's this collision between its various sensibilities that might not make Fury a great film, but it's certainly an interesting one.

Do you feel this content is inappropriate or infringes upon your rights? Click here to report it, or see our DMCA policy.
Brad PittDavid AyerJon BernthalLogan LermanMichael PenaShia LaBeoufwar movie