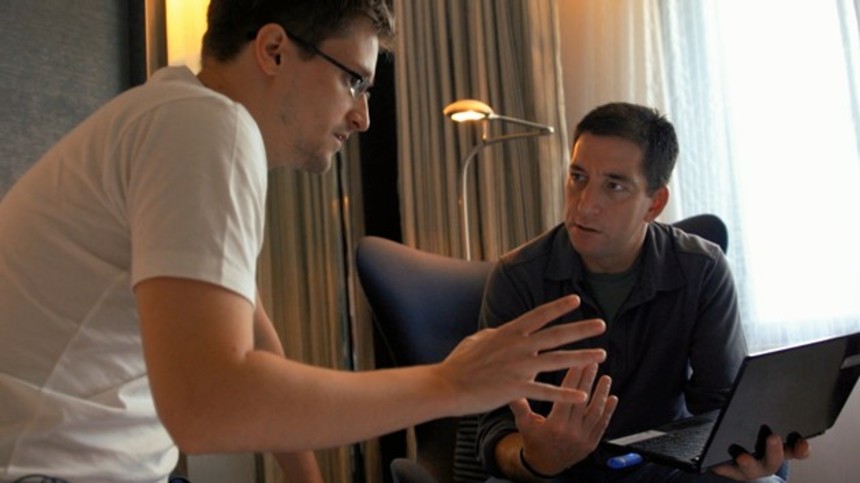 In this year's New York Film Festival there were two gripping thrillers, both receiving their world premieres at the festival, and, intriguingly enough, both featuring moodily effective scores by Trent Reznor and Atticus Ross.

One was David Fincher's novel adaptation Gone Girl and the other was Laura Poitras' documentary CITIZENFOUR; the former fictional, the latter very chillingly real. And although it's likely that CITIZENFOUR ultimately won't reach nearly the amount of viewers that Gone Girl will, it is Poitras' film that is essential viewing for anyone even the least bit concerned about the erosion of civil liberties and individual privacy that has occurred steadily since the Sept. 11 terrorist attacks in the U.S.
The changes in America post-9/11 have been the overarching subject of Laura Poitras' films during the past decade, such as My Country, My Country (2006) and The Oath (2010). CITIZENFOUR is the final part of Poitras' "post-9/11 America" trilogy, and it's the one where the filmmaker herself is very much an integral part of the story she tells. It also powerfully illustrates the great value of documentary filmmaking in going behind the headlines to vividly give us a sense of the human beings behind them, and going deeper into aspects of stories that don't come though in brief, often sensationalized nightly news reports.
In June 2013, Guardian journalists Glenn Greenwald and Ewen McAskill published their exposé of the National Security Agency's (NSA) secret program to collect information from Verizon customers. Laura Poitras and Barton Gellman's Washington Post story on PRISM, a secret program giving the U.S. government access to user data from Google, Facebook, Apple, AOL, YouTube, and many other companies, followed closely on the heels of the Guardian article.

Greenwald was especially visible during this period, appearing frequently in TV interviews. These revelations were particularly explosive and shocking to many, as they starkly exposed how ordinary U.S. citizens' civil liberties and privacy had truly eroded post-9/11. These governmental acts went well beyond targeting people under suspicion for terrorist activities to indiscriminately gathering mass amounts of information on ordinary citizens not accused of any sort of crime, all without any court orders.
The media storm surrounding these revelations greatly intensified when the source behind them came forward, very soon after the Guardian and Washington Post articles were published. Edward Snowden had been working for the NSA as a private contractor for about four years. Greatly disturbed by the vast and illegal programs of NSA surveillance both inside and outside of the US, he began to anonymously contact journalists, offering to hand over classified evidence of this. 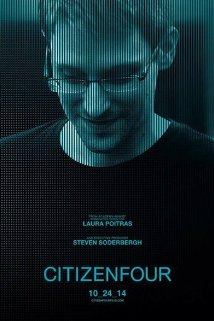 CITIZENFOUR - which takes its title from the alias Snowden used before revealing himself in his first meetings with journalists - details the events which led up to the exposure of his startling revelations. At one point in the film, a TV news anchor likens these events to a John Le Carré spy novel. And though that description may seem like a flippant and trivializing way to characterize one of the most significant disclosures of secret government activity of our time, Poitras' film definitely does often feel like a real life thriller unfolding in front of us, often in real time.
The film is structured around eight days of meetings in June 2013 between Snowden, Poitras (who filmed these conversations), Greenwald and McAskill in a hotel room in Hong Kong, where Snowden decided to go after leaving Hawaii, where he was stationed for his NSA work.

These scenes are the heart of the film, and the progression of these conversations, as well as the film's observations of Snowden's demeanor, are quite revealing. Snowden comes across as rather preternaturally calm, considering the explosive nature of what he is revealing to the journalists, as well as how irrevocably his own life is about to change. There are even a few instances of humor, such as when Snowden drapes a jacket over his head to hide his keystrokes as he types on a keyboard, and then offers the jacket to Greenwald.
One of the most pertinent and interesting discussions in the film concerns when and how Snowden should reveal himself. Unveiling his identity was never a question to Snowden; he intended to do so all along, since he believed that to remain anonymous was a way of allowing the authorities to intimidate him. Revealing himself was a way to declare that, in his words, "I'm not scared of you." His concern, however, was that this should happen in a way that he didn't become the focus of the story. Snowden didn't want the media's tendency to reduce everything to personalities to detract from the grave nature of the information he wanted to reveal to the public.
The unique reverse angle that CITIZENFOUR offers on the aftermath of Snowden's revelations, from Poitras' insider position, lends a special urgency to the scenes that occur after Snowden has revealed his identity. Reporters begin to close in on his location and call his hotel room; Snowden meets with human rights lawyers to discuss refugee status and asylum options, and soon after goes underground.
These events had enormous impact not only on the global body politic, but on the individuals involved. Snowden, Poitras, and Greenwald have now all become essentially exiles from the U.S., and took great personal risks in getting information out to the public. Poitras, who had already come under government surveillance because of her documentary work (this was why Snowden contacted her initially), is now based in Berlin, to keep her materials out of the reach of U.S. authorities. Greenwald now lives in Rio de Janeiro, Brazil, for similar reasons; his partner was detained as a result of Greenwald's involvement with Snowden. Snowden himself is currently in exile in Russia; late in the film, we get a glimpse of his life there with his girlfriend.
Snowden's revelations have receded in the background of the many crises and scandals that have arisen since then. CITIZENFOUR provides a valuable service in reminding us of the import of these revelations, and the chilling reality of the government's reach into the private information not only of U.S. citizen, but of people all over the world. This knowledge gives an eerie charge to the images of remote locations in the U.S. and Great Britain that recur throughout the film, sites the NSA uses to collect the vast information they continue to gather on all of us. CITIZENFOUR is a deeply unsettling viewing experience, but one that shouldn't be missed.
CITIZENFOUR opens in New York, Los Angeles, San Francisco, and Washington, D.C. on October 24, with a national release to follow.