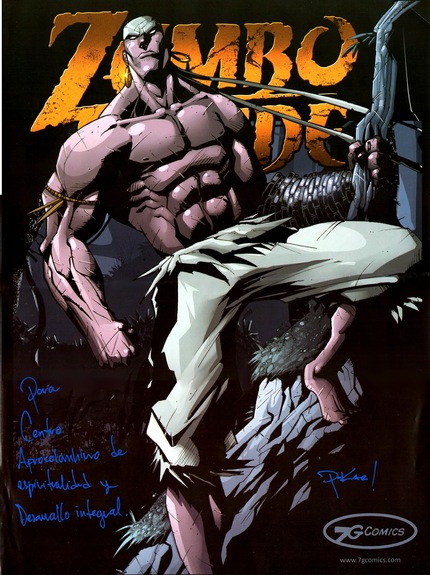 What next for Chilean martial arts star Marko Zaror? It would appear a move into the world of superheroes with a role in Colombian superhero effort Zambo Dende, with director Riccardo Gabrielli R tweeting out yesterday "@markozaror mañana nos vemos para otro gran proyecto! #ZamboDende"

What is Zambo Dende? A Colombian comic book created by Nicholas Rodriguez, word began to circulate in December 2013 that Disney were interested in backing a feature film adaptation for the Latin American market, creating a local superhero for Spanish speaking audiences. Here's a synopsis for the comics:

Latin America 1577; two different races, both deprived of their very own cultural legacy sharing the merciless scenario, down from Colombia to the south of Brazil, were confined as slaves to do hard jobs on their wait for death.


But every excess has its limit and it came in the form of a child, a child of hope. Azuk the first zambo to be born upon this people. Born with the greatness of African kings inherited from his father and the nobility gained from the blood of the ancient root of her Indian mother whose tragic assassination marked him and turned him into a symbol, a beacon of hope and freedom.

While there has been no official announcement made about the project moving ahead or any casting the tweet above - which translates to "See you tomorrow for another great project." - would certainly seem to indicate that it's happening with Zaror in a major role. And if you're going to do a Latin superhero film it's hard to imagine a better leading man ...

Take a look at the video below for a look at Zaror in action in the recent Redeemer.