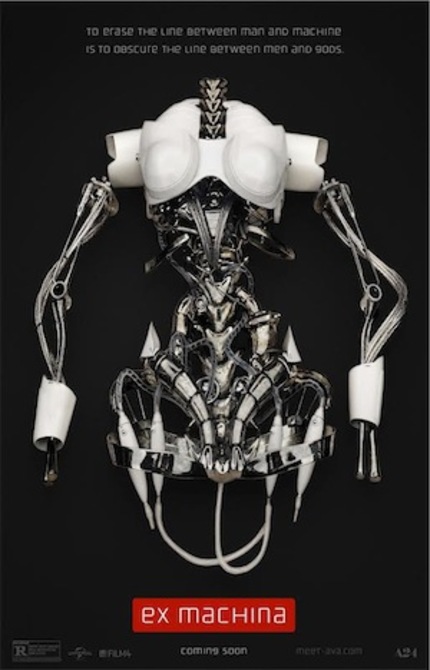 [UPDATED with trailer, which looks great!]
Alex Garland, writer of 28 Days Later, Sunshine and Dredd, has just directed his debut feature, Ex Machina. The folks at A24 have stepped up to distribute the film in the US, with the release set for April 10, 2015.

While I have been getting wary of man and machine stories as of late (the exception being that Black Mirror episode with Hayley Atwell and Domhnall Gleeson), Garland's take on such a tale makes me perk up. And with the promising talents of Oscar Isaac, Alicia Vikander, and *gasp!* Domhnall Gleeson in front of the camera, welll... Here's the lowdown on the story:

Caleb Smith (Domhnall Gleeson), a programmer at an internet-search giant, wins a competition to spend a week at the private mountain estate of the company's brilliant and reclusive CEO, Nathan Bateman (Oscar Isaac). Upon his arrival, Caleb learns that Nathan has chosen him to be the human component in a Turing Test--charging him with evaluating the capabilities, and ultimately the consciousness, of Nathan's latest experiment in artificial intelligence. That experiment is Ava (Alicia Vikander), a breathtaking A.I. whose emotional intelligence proves more sophisticated, seductive--and more deceptive--than the two men could have imagined.

As basic stories go it sounds like a classic sci-fi conundrum that falls somewhere between Isaac Asimov's measured, cerebral nature, Harlan Ellison's twisted take on humanity, and Ray Bradbury's heartfelt wonder and sentiment. Heck, there was even a moment where I though "This is the sexy A.I. version of Willy Wonka!"

Whatever the case may be, we're set to get the teaser trailer tomorrow, so just exactly what Garland is up to will become clearer then.

Do you feel this content is inappropriate or infringes upon your rights? Click here to report it, or see our DMCA policy.
a24alex garlandalicia vikanderdomhnall gleesonex machinaoscar isaacs