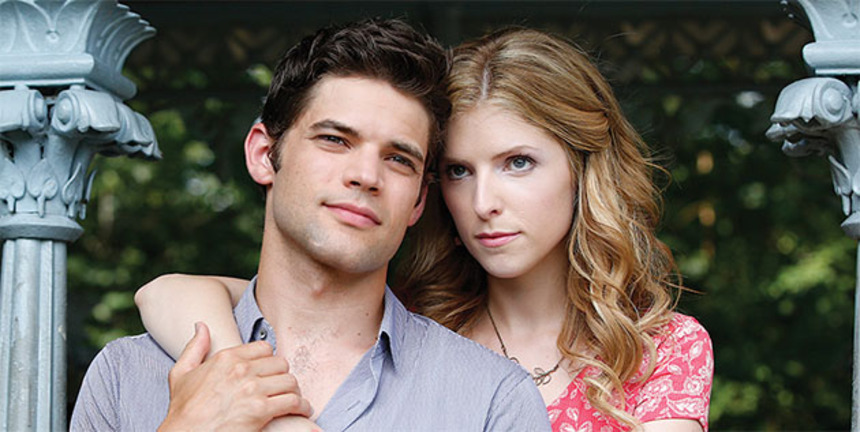 It's common knowledge that a pure musical takes more than a bit of suspension of disbelief. From the first notes, you kind of have to go with the flow, taking in the abstraction as it comes. On stage, this level of abstraction is often heightened by the stage design, the proscenium forming a canvas on which the performance takes place that's fixed in space, while the movement of the actors and the rise and fall of the music drives the performance forward.

On film, you've got several options - do something that's documentary like, filled with shakycam movements and haphazard compositions, or go over the top kitsch, calling attention to the theatricality of the work.

With >The Last Five Years, director Richard La Gravenese immediately calls attention both to the conceit of singing emotionally to camera, and to the camera itself. A sweeping crane shot introduces us to the New York brownstone, not unlike the roving shot that details the courtyard in Rear Window. We hear the tune on the piano and pass a pianist playing in time with the music on screen, just one of the diagetic moments that the director highlights. The camera then enters a ground floor apartment where we see Cathy, played by Anna Kendrick, tearfully singing about the breakup of her marriage to Jaimie (in the wedding photos, Jeremy Jordan stares out).

The camera movement is fairly constant, framing, then reframing Kendrick, emphasising certain lines and retreating from other emotions. And like the singing itself, this is either going to really annoy you, or you're going to go along for the ride.

For me, I'd highly recommend the latter. For if you give into this rich, emotional film, you'll be highly rewarded.

Originally staged as an off-Broadway play, written and scored by Jason Robert Brown, the narrative is told in a series of fractured moments. We start at Cathy's emotional end, and are introduced to Jamie five years earlier, just as his life takes a dramatic upswing. These crossing storylines enmesh with his rise and growing narcissism and her optimism giving way to depression and loneliness. We're pulled in separate emotional trajectories song-to-song, the timeline purposely buttressing differing emotional moments off one another, illuminating them in sometimes surprising and effective ways.

Brown's compositions are varied and lively, taking interesting chordal leaps and rarely sounding "showy." In fact, despite the grandiose camera work and relatively close staging, it never feels claustrophobic - until it wants to be. The camera movement helps prevent the film from succumbing to the usual bane of films like this: that "stagey" feeling that you're just watching the play on screen, absent from any cinematic moments that can (and in case do) open up the story and provide a further heightening of emotion and narrative power.

Vocally, Kendrick and Jordan avoid belting out their tunes. There's an intimacy to their singing which is in keeping with the score. The quality of the sound changes, and I'm guessing that at times much of the signing was captured live on the soundstage, providing an immediacy to the performances. Some of the songs are simply terrific, with some glorious piano gospel flourishes played, I found out from the credits, from composer Brown. Who better I guess to mess with the chords of the songs than the man who's wrote them in the first place?

The story is aching but never melodramatic, a core believability riding through the already heightened world of the musical. A visit to Central Park is one lovely scene, ticking off the famous buildings that loom from the Upper West Side of Manhattan. It's only after remembering that director La Gravanese wrote the (sublime) Fisher King that one finds an extra-textual allusion to another story of love and loss.

When the final duet takes place, bringing us back to the beginning (and in turn the ending), there's a gorgeous polyphonic interplay. Sure, it's a common practice, but here it's done with a delicacy, without going too far into Sondheimian doublesinging. The orchestration throughout is lush when it needs to be, spare when required, a reflection of similar shifts in tone from the performances.

A moving, at times magnificent work, The Last Five Years showcases some pretty immense talents in a fairly intimate setting, combining a witty libretto with memorable tunes and a well-structured story. One of the best musicals in many years (complete with a dig at superstar casting!), this is a film well worth giving into, an ambitious and immensely rewarding tale told extremely well.

Do you feel this content is inappropriate or infringes upon your rights? Click here to report it, or see our DMCA policy.
Anna KendrickJeremy JordanMusicalRichard LaGraveneseTIFF 2014Jason Robert BrownTamara MintzCassandra InmanComedyDrama

More about The Last Five Years