Toronto 2014 Review: THE EQUALIZER, A Quietly-Assured Thriller For The Masses 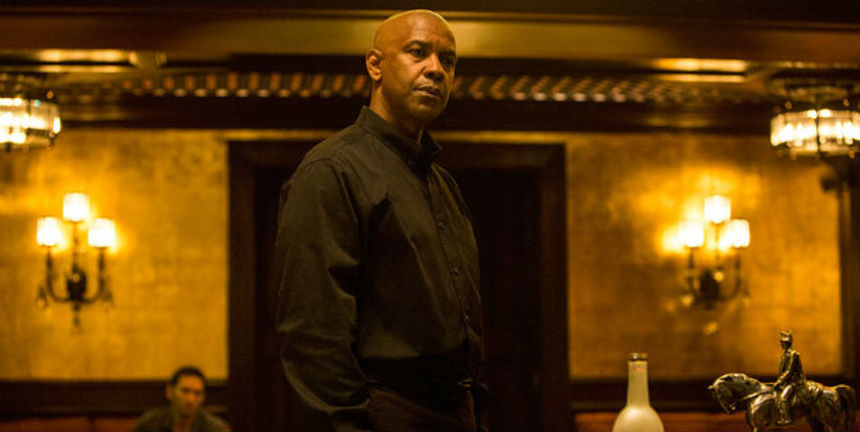 Cool and slick -- no, no, let's make that uber-cool and uber-slick -- while also being uber-warm -- yet wistful, kind to strangers and hostile to unrepentant criminals who ignore "stop that, please," Robert McCall is a superhero for the post-post-post-modern world.

He is polite and cheerful at his place of employment, a big-box retail establishment that stocks every imaginable item for the home and garden. He lives modestly in a small apartment, which he keeps clean and tidy. He does not, apparently, own a motor vehicle, preferring to walk and/or ride the bus to and from his modest neighborhood in Boston.

He is happy to serve as a kind yet firm mentor for his younger, full-figured co-worker Ralphie (Johnny Skourtis), who wants to become a security guard. He is also willing to offer encouraging words to a young prostitute (Chloe Grace Moretz) who frequents a local diner at the same post-midnight hours that he does.

What's his real story, though? And why did someone decide to make a movie about him called The Equalizer?

As played by Denzel Washington, Robert McCall does not look like he should be working at a big-box retail establishment and living modestly in a small apartment. For one thing, he's too dang handsome. For another, he exudes a preternaturally modest contentment for a single man in his late 50s. For the most convincing reason, he has an apparently permanent case of insomnia.

Now, the reasons for Robert McCall's insomnia become apparent in Richard Wenk's screenplay, based on the 1980s U.S. network television series that starred Edward Woodward. The film version, directed with quiet assurance by Antoine Fuqua, walks a fine line between a routine action thriller and a sophisticated criminal enterprise. What I remember from the TV show is that Woodward, then in his mid-50s, made for an unusual leading man, an obvious stranger in a strange land who strove to be polite at all times even as he delivered justice for strangers. 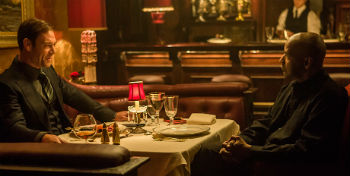 Washington is a much better known personality than Woodward ever was, which means it's much easier to believe him capable of the outsized actions that he performs in the movie. Yet the script, tailored for the star, keeps the emphasis on the character's more humane and gentle actions; he's not out for revenge and he doesn't necessarily enjoy the things that he ends up doing. He'd much rather sit quietly and read a book.

At the same time, Fuqua doesn't stint on the adult-oriented action; the violence and bloodshed earns the movie its rating -- "R" in the U.S. -- without pandering. Granted, Wenk's screenplay tells a familiar story and explains more than what is needed, betraying a desire to appeal to the widest audience possible. But the combination of the script, direction, lensing (by Mauro Fiore, Training Day), editing (by John Refoua, Olympus Has Fallen), and production design (by Naomi Shohan, Training Day) lend this particular b-movie a particular elegance and stylish grace.

The re-teaming of Washington with Fuqua will not stir anyone to talk of an Academy Award, as with Training Day, but Washington's performance is even-toned and on-target, a likable character who is capable of very deadly activity. Marton Csokas provides primal menace as the primary villain, a Russian gangster, with good support also provided by David Harbour as the gangster's Boston point man.

I can't imagine anyone being utterly surprised or overly offended by anything in the movie, yet it's a pleasure to watch professionals delivering entertainment for adults that doesn't insult anyone's intelligence. The Equalizer walks steadily before it runs without hesitation, arriving at the finish line well ahead of the competition.

The film debuts tonight at the Toronto International Film Festival and will screen again on Monday, September 8, and Sunday, September 14. It will open wide in theaters across North America on Friday, September 26.

Do you feel this content is inappropriate or infringes upon your rights? Click here to report it, or see our DMCA policy.
Antoine FuquaChloe Grace MoretzDavid HarbourDenzel WashingtonMorton Csonkas

More about The Equalizer