Toronto 2014 Review: Sono's TOKYO TRIBE Is The Best Musical Of The New Decade 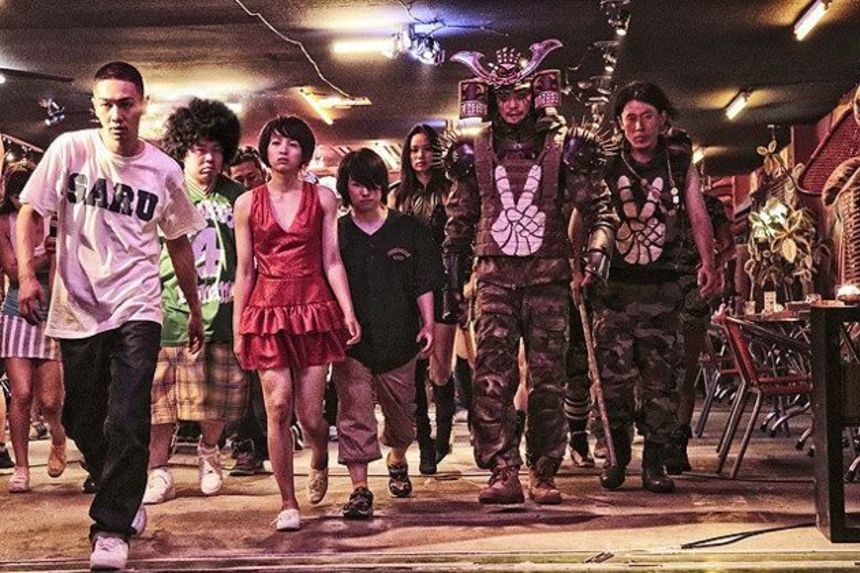 Disclaimer: I don't like hip hop. In fact, most of the time I can't stand it. This movie is a hip hop musical. I love this movie.

Right now Tokyo Tribe is my choice for the best movie of 2014. Fascinating and surprising with every performance from actors and singers alike, this movie actually spends most of its time in exposition and descriptions, al sung to catchy beats, perpetrating Japanese words in a rhythmic fashion. Sono Sion has managed to stir up something incredible in me, and I guess it'll happen to everyone: To like hip hop for two hours of your life.

The most surprising element of this movie is how much of a musical it is. Sono doesn't lose his style when he's trying to imitate the aesthetics and the needed rhythm that the hip hop culture needs to have. What's also surprising is how the story is based around the songs, yet the source material is a manga that has no attachment to songs in any way.

Sono creates music from images, delivers plot through them, and it's not in any way strange to the viewer that things happen this way. Gangs (or tribes, as put in this movie) usually speak, battle and sing stuff about their personal situation.

Sometani Shota (Himizu, Lesson of Evil) plays the narrator/rapper of this story, doing the work of a teacher, being front and center for Sono's most impressive long shots in his career, the first continuous take going over 5 minutes, narrating the place in which the gangs live. Whenever Sometani is on the screen, we know he is almost like an invisible immortal figure, who doesn't take a side in this gang war. He serves as their historian, rapping and looking at the camera, telling us who is who in the gangs. The camera follows Sometani and we move forward, backwards, with his voice as the only guide.

Then we have Big Buppa (that rhymes with Buda, as he is quick to say in his only singing number) played by Takeuchi Riki (the Dead or Alive series), one of the baddest bad guys in the history of Sono's career. A rich, bad-mouthed, perverted woman-eater (he actually cooks and eats women, and takes pleasure out of it) who might be both the source of the most disgusting and awesome events in the film. With his son, a young man who reduces the will of people until he uses them as furniture, Big Buppa is a part of the most powerful tribe, the Bukuro Wu-Ronz.

With the help of the Waru (an out-of-nowhere tribe) Big Buppa uses force to try and take over the rest of the tribes. Between the violent Shinjuku Hands, the beautiful and dangerous GiraGira Girls, and the nasty Shibuya Saru, the Musashino Saru are the ones who support a message of peace, love and understanding between all the tribes. The main conflict is between Kim, of the peaceful tribe, and Mera, one of the leaders of the Wu-Ronz clan.

Between the references to classic films like The Warriors (a tribe is based around baseball and the use of painful bats as weapons, but they don't paint their faces, that would be weird), and Sono's playful editing style, one can't help but fall completely into the intricate relations that are put forward in the first half hour of the movie.

The film is wild in its visual style, with gorgeous cinematography... neon lights, rain and outrageous colorful costumes for every character. The sets are beautifully constructed. So yes, it's without a doubt the biggest budget that Sono has ever had, and it shows in the way that he constructs a world that feels so vivid you could drop right into it.

Filled with one liners that will make you laugh, bloody violence and great acting (using real rappers, artists, DJs, tattoo designers, etc.), Tokyo Tribe is a film to see with an audience; they will sing and chant, and move their feet around. So, yes it is a very, very fun movie. It might be the most fun that Sono has ever put on screen. It's also a revelation of how musicals can be executed. Filmmakers, take note, hip hop is not dead.