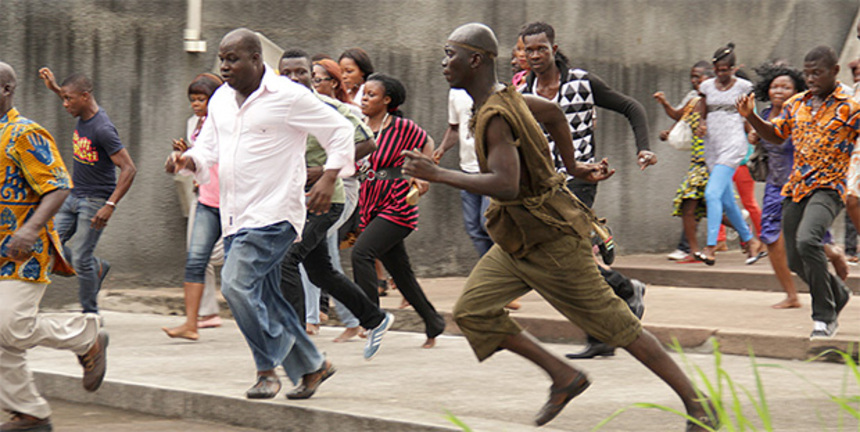 Ivorian Philippe Lacôte's film Run is a brash fiction debut for this documentarian. The film begins with an off-camera assassination, and through a series of concentric flashback's we're told the story of Run. Part gangster and part activist, Run also proves to be a man with a complicated past and a strong moral code.

With a narrative spanning decades, the film manages to travel through several modes, from hardscrabble drama and social commentary to a coming of age tale of a whipsmart street urchin. Entwined with the complicated history of social unrest that been fostered in West Africa for generations, the film highlights a rags to riches to (literally) rags story of this fascinatingly complex character.

Lacôte sets his country's gangsterism and corruption against the backdrop of another fable of excess and crime -- Brian De Palma's Scarface. The notion of "you get the money, you get the power" is overtly referenced, and a similar kind of vicarious genre fun is at play in other parts of the film. But despite these allusions to genre tropes, the film remains resolutely realistic, with even its most poetic moments coming across with the factual precision of a documentary film.

Given the relatively complex structure, the film never feels scattershot, drifting effortlessly between time periods while maintaining coherence. While the storyline is powerfully moving, it's fundamentally a character piece about a man who can't quite run away from his past, just as his country seems destined to repeat its own tragedies as generations fueled by greed perpetuate corruption and mistrust.

There's a moment where Run can't quite rid himself of the elastic band he has wrapped around his bald head, a vestige of a soiled disguise that allows him to blend in as outcast. It's a moving moment, and speaks to the richer backdrop that the film occupies, where even garbage takes on a kind of meaning when it's been re-purposed by those who themselves know what it feels like to be discarded.

A unique and powerful film, Lacôte demonstrates fine craft, and has assembled an extraordinary cast to tell a compelling, raw and revealing film. Run is terrific filmmaking, and a bold look at an area of the world whose stories too seldom reach the international stage.