Hey Vancouver! Win Tickets To COHERENCE And Blow Your Mind! 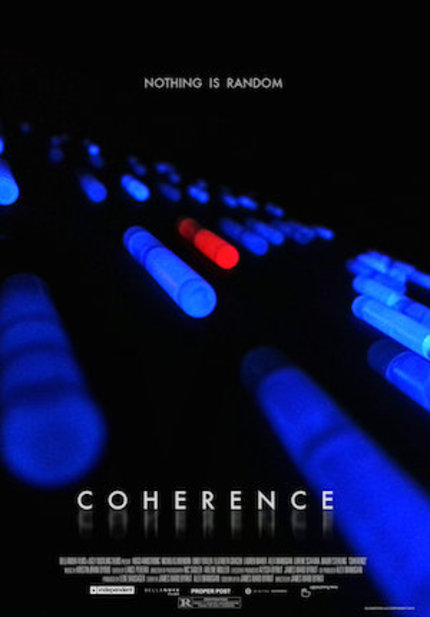 (NOTE: The ticket giveaway is now closed.) Do you want to see a movie titled Coherence that reportedly "somewhat intimidated" me? Of course you do!

Now, to temper your enthusiasm, I must point out that this giveaway is only available to readers in Vancouver, Canada -- sorry, residents of cities named "Vancouver" in other countries -- who want to see the mind-bending film when it opens in theaters in your fine city on Friday, September 12, or shortly thereafter.

We have five (5) pairs of passes; these passes are what is called in the exhibition business "run of engagement," which means you can use them once during the film's theatrical engagement. (Personally, I wouldn't wait too long, because if you waited until, say, Sunday, September 14, the world might end on Saturday, September 13, and then you'd be out of luck.) Each pass is good for two (2) people.

If you are now thinking, 'Yes, I want to win one of those passes so I might take my friend / romantic partner / marriage mate / worst enemy to see an exciting thriller, but only if the synopsis sounds cool,' then I refer you to the official synopsis:

On the night of an astronomical anomaly, eight friends at a dinner party experience a troubling chain of reality bending events. Part cerebral sci-fi and part relationship drama, Coherence is a tightly focused, intimately shot film that quickly ratchets up with tension and mystery.

In the interests of full disclosure, I should acknowledge that I saw the film at Fantastic Fest last year. (My review is linked below, along with other links about the movie.) Although my fellow ScreenAnarchy writer Kurt Halfyard believes that I was "somewhat intimidated," I will protest that I am not smart enough to argue with him.

The giveaway is now closed. Thanks!

If you have read this far, you have proven yourself a good and faithful scanner and/or reader, and I commend you. Therefore, please send us an email with your name and confirm that you are a very intelligent person and that you want to watch a movie in Vancouver, Canada, that may twist your mind into a very tight pretzel. We'll select five people at random from entries received by 11:59 p.m. E.S.T. on Thursday, September 11, 2014.