Folklore Of The Blues: 5 Questions With MEMPHIS Director Tim Sutton 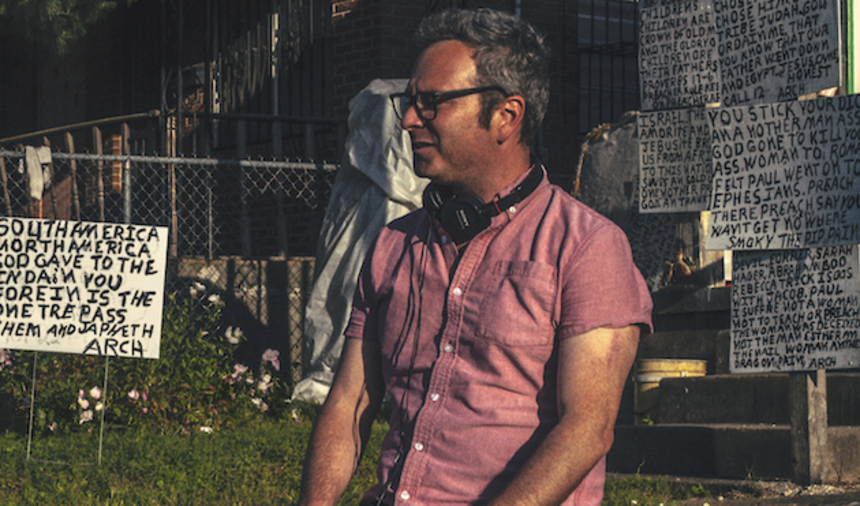 There is magic in Memphis. Magic and soul, fear and frustration. Music, passion and a heavenly voice that tilts from the throat of a modern monk on a quest for the divine amongst the derelict.

When I first got word of Tim Sutton's second feature it was in prep for last winter's Sundance. The film, at the very least was going to be a gorgeous one to look at. Weeks later, walking out of the theater, I knew instantly it would be a touchstone film of 2014 for me.

In my review, republished yesterday, I cited that "Memphis is that rare and soulful film that causes one to remember why going to the cinema can be one of the greatest joys in life. It is a film that glides somewhere between narrative feature and documentary to striking effect. Its realities are conjured from the everyday, of Memphis, of its people, and filtered through myth and religion, childhood and music, madness, love, and that one mysterious figure who looms over it all: Willis."

Wills, the carrier of the voice, and the walker of the way, is played by musician Willis Earl Beal. A journeyman in the truest sense of the word, Willis makes for a riveting on-screen subject. Guiding, shaping and collaborating with such a spark of talent is director and writer Sutton.

Pavilion, Sutton's debut was an ethereal ode to suburbia, its young protagonist prowling the cookie-cutter side streets of an Arizona town as if he were traversing the most beautiful and haunting post-apocalyptic landscape ever. Sutton takes that astute gaze of American life and lets it blossom further in Memphis, finding, focusing and shining a light on the enriching lore of a city, its people, and its music. While I was unable to sit down with Sutton in person, he was gracious enough to set aside some time to answer some questions via email. What follows is an exploration/exchange on spirit, collective collaboration and imagination, music, visual rhythm, and the eccentricities of Willis Earl Beal.


While I'm sure you'd agree that all experiences have benefit, is there one you'd like to share from your earlier days of making movies/ telling stories that's really stuck with you as your process has developed?

With Memphis going out into the world over the past year what really sticks with me is when I saw Bruno Dumont's La vie de Jesus at the NYFF in like 95 or 96. The audience was split down the middle and the QA was really heated.  some in the theater bordered on rage, they were offended. I was really moved by the film and how the enormous title matched in its own unique way this very small and humble film. Dumont was very matter of fact in the QA, not rattled in the least. It was clear he was not making films to please everyone but that he was out to build a body of work that connect to those it attracted on a level of unbelievable intensity.  It was a great lesson.


The philosophical and spiritual nature of the films delights me to no end. As I read it, it is far more ponderous and playful than say downright heavy, though destruction and rebirth motifs and energy are crackling throughout. Can you talk about how that kind of stuff appeared as the project developed, and how that shifted once you were actually in the city of Memphis and interacting with Willis.

3 things I wanted this story to explore in both authentic and ethereal ways  1) I wanted the character to be a bit of a pilgrim, a monk - one that has a third eye and that is on a spiritual path that is his alone and, yet, somewhat impossible to relate to others.

2) I wanted to approach the concept of folklore and an ethereal exploration into the idea of blues - not blues music, specifically, but the concept of blues - of hell hounds, of the elusive search of soul, cities dying, spirits all around us, deals with god and the devil - real delta ghost story in a haunted city.

and 3) I wanted to visualize an eccentric african american musician's experience - like Thelonious Monk or O.V. Wright - someone blessed beyond with talent, but so strange and in his own world and uninterested in the typical ideas of success. Willis IS all of that, as is Memphis as a city, so in many ways it became my job to just steer all of our collective imaginations into the void and go with it, play the changes, be true to Willis, be true to the city of Memphis, and be true to the ideas of myth, beauty, innocence, isolation, and escape.

Could you talk about the rhythm of the film, both visually and in its sounds. How you shaped it with your collaborators on set, how the locals informed it and how that then came together, perhaps in some new and surprising ways, once editing with Seth Bomse.

The visual rhythm is the same as the 'dramatic' form in that I don't have a lot of interest in establishing the location, showing people walking into a room, playing out a scene, then leaving the room. I am more intrigued by fragmented structure, finding one moment of truth or curiosity in a scene and moving on to the next and building a story that connects with you in more emotional ways, maybe even subliminal ways, rather than holding your hand and showing you the way. The less explanation the better.

Backstory shouldn't be dictated, it should be inferred, mixed with the viewer's own experience, this way, you're less in need of plot because we've built a world to inhabit for a specific amount of time together, and that can be a meaningful experience. Plot, in this case, gets in the way.  I wanted sound to hang from the trees and to whistle with the train and the points of that often happen on set. Sometimes the train would just come low over the horizon during a scene and it would be perfect - and Seth would build on that and then make the sound of the train an actual character in the film, drifting past willis or other characters the way it happens naturally in Memphis - but doing it strategically so that it quietly or loudly accents scenes to beautiful dramatic effect. Seth is as good a sound designer as he is an editor.

Do you find that actual history and the collective imagination go hand in hand, informing each other?

Well, its a huge question. From my end, I don't care at all about fact.  I wonder on a lot of things and that day dream just starts to take shape into something real to me.  And I live that out through collective collaboration. I have long talks with [cinematographer] Chris Dapkins, or [production designer] Bart Mangrum, or Willis and then, like in the film, we create it out of magic - and the magic comes true, it becomes utterly real, but what that magic is might not fulfill people's concept of what it should be.

What's on the horizon for new films or stories of other kinds?

We're close to getting funding on a third film - which I kind of consider the last installment of a trilogy (low budget, non actors, ethereal world) - that executes this form and style I have been working through, but places it firmly in present time and deeply affected by a very extreme social issue. Hopefully we'll announce something soon!

Memphis opens September 5 in NYC at the IFC Center (with a sneak tonight), and September 12 in LA, at the Sundance Sunset Cinemas. Keep an eye on the film's website for further info.

Do you feel this content is inappropriate or infringes upon your rights? Click here to report it, or see our DMCA policy.
american southbluesmemphismusicsundancetim suttonvenicewillis earl beal