Fantastic Fest 2014 Review: WHISPERS BEHIND THE WALL, For Those Who Listen Closely 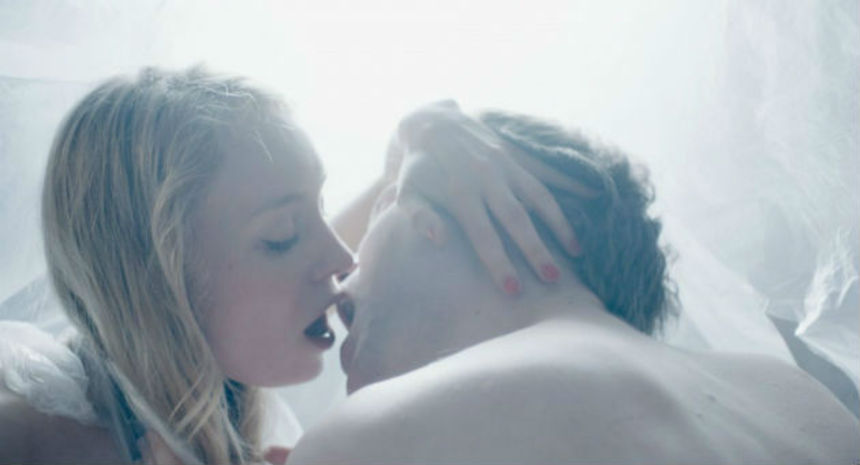 Martin (Vincent Redetzki) is desperate, so he does what he's asked by Horn, the older janitor he's just met. As Whispers Behind the Wall (Die Frau hinter der Wan) begins, the younger man has been sleeping in his car while starting law school, unable to secure an apartment in Berlin, but Horn offers the possibility of his own place. Martin is ready to take anything, even a deplorably unkempt, sub-leased space that's been walled off from his new landlady's large apartment.

As he cleans up his new accommodations, Martin realizes that he can hear, well, whispers and other conversations from behind the wall of his landlady's place. He also discovers that his own apartment harbors bizarre secrets. In addition, he can spy on the neighbors across a very narrow inner courtyard. And then, late one night, his landlady, Mrs. Simone Bader (Katharina Heyer), invites him to stop by and drop off his lease, and before Martin knows quite what's happening, he's caught up in a dizzying whirlwind of tempestuous sex, boiling-temperature jealousies, and aberrant behavior he's never seen before.

Making his feature debut, which he co-wrote with Robert Dannenberg, director Grzegorz Muskala displays a good knowledge and command of genre conventions. The prickly, suggestively claustrophobic atmosphere inside the apartment building is, inevitably, reminiscent of Roman Polanski's classic, The Tenant, but this is a lower-rent version of that, with much greater variety in the palette. Muskala balances between tight close-ups and medium shots, likewise swinging between ill-lit nightmare scenes and gloriously bright daytime sequences, which keeps the entire production on a welcome, uneven footing. 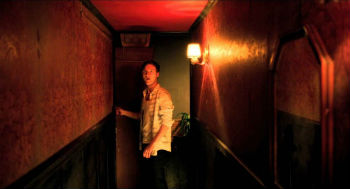 The scenario described in the opening is merely a set-up for what is to come, which is a slow-burn approach that, eventually, becomes as desperate as Martin. He's a young man, evidently living on his own for the first time, easily moved by his emotions, yet evidently lacking much experience with women, especially a woman as alluring and potentially volatile as Simone.

Simone is a classic femme fatale, a very strong personality driven by her own very private desires and needs. There's nothing terribly surprising about the relationship that develops between her and Martin. She's somewhat older, obviously more experienced in every way imaginable, and has a much firmer grasp on what she wants out of life. And she's not much for explaining herself.

Neither is the movie. Whispers Behind the Wall is not terribly interested in the inner lives of Martin and Simone. As noted, their true motivations are kept within their own sweaty bodies, allowing the viewer to draw their own conclusion. The main characters are both looking out for themselves, which is probably what keeps them bumping and crashing against each other.

Sure, they're next door neighbors. Sure, they're landlady and tenant. Sure, they're both in good physical shape and hungry for sensual pleasures. More than that, though, they're both driven by a desire to possess the other. And, without spoiling anything, that's a large part of why the movie works as well as it does, as a modest, modern, twisting, and churning film noir.

Do you feel this content is inappropriate or infringes upon your rights? Click here to report it, or see our DMCA policy.
Die Frau hinter der WanFantastic Fest 2014GermanyGrzegorz MuskalaVincent Redetzki