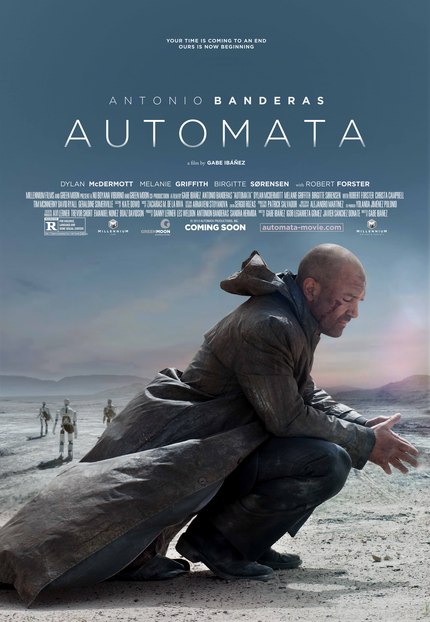 Spanish filmmaker Gabe Ibáñez's long-awaited second feature Autómata is an intense and gripping dystopian story, bordering on European surrealism within a classical narrative. Certainly, many current films present a weary and negative view of humanity's future, be it death by plague, war or environmental disaster. In Autómata, humanity might be ending with a whimper, but the planet, and the sentient beings it might leave behind, suggest a cyclical mythology in which people might be just a blip, but not without substance.
Set in the mid-21st century in an unknown city, when desertification has decimated the global population and robots do most of the dirty work, Antonio Baderas plays Jacq, an insurance agent who checks on people's claims of defective robots. The robots are supposed to adhere to certain protocols, but Jacq discovers that some of them are repairing themselves and abandoning their duties. As one man with a personal vengeance (Dylan McDermott) tries to destroy the robots' newfound life, Jacq sets out, somewhat unwillingly, to find the source of the robot's newfound self-awareness.

Ibáñez creates a creepy, unsettling feeling in creating this emptying world; the usual expectations of dystopian sci-fi (crowded cities or rural landscapes populated by wild gangs) are more or less abandoned. Instead, what is presented is a surreal lens of a distorted mirror. Instead of barbarity, fear, desperation and violence, there is a quiet and inevitable descent into superstition, numbness and futility.

On the surface, the film looks like a combination of Blade Runner and I Robot. Obviously, these markers are hard to avoid. But Ibáñez exchanges the dirty press of humanity with an eerie emptiness, a bit of a La Jetée existential melancholia that creates a distinct hum under the first half of the film. Conversations between Jacq and his wife Rachel (Birgitte Hjort Sorensen) about the logic of having a child on a dying planet; while Jacq carries the proverbial weight of this dying on his shoulders, Rachel retreats into a faith that is close to blindness. Ibáñez matches the mise-en-scene to the conversation: Rachel is lit with a soft glow indicating hope, while Jacq is a harsh brightness that emphasizes his resignation to the death of hope.

The first half focuses on setting the story and characters, with evil corporations, enigmatic villains, and the odd yet somehow irrepressible desire to survive despite the odds. It's no stretch to imagine that those in power would seek to keep it, even though, as they say, you can't take it with you, and Ibáñez makes it clear that greed and vengeance don't disappear. Neither does the desire to kill that which you do not understand. The robots, which are designed and framed as to often ellicit more emotional response from the spectator than some of the human characters, are the misunderstood. The continuous unmasking of the robots is extremely effective, a stripping down to essential parts that is in direct and deliberate contrast to the wasteful of humans that has brought on their on destruction. Jacq is pulled against his will into an underground war, and Banderas plays the role perfectly, displaying Jacq's quiet frustration and deeper humanity.

This first half spends perhaps a bit too much time on exposition; the story works best at its simplest and strangest moments. Once the setting moves from the city to the desert, the film really takes off. It is a stunning vision of the edges of a former Biblical paradise, where Adam and Eve found their identity in harshness and desolation. The cinematography is beautiful without being pristine, exposing the danger without reduing itself to pure horror. Ibáñez shifts from a message of darkness shrinking to nothingness, to one of unforgiving yet sacred brightness. He continues a deconstruction of the usual use of tropes and motifs of dystopian sci-fi to get at the deeper metanarrative themes of extinction and evolution. Why should humans survive? Why shouldn't machines evolve? Humans too are machines, and we wear masks as the robots do. Caring and compassion is all that is left at the end.

It is the mood that the story comes through most clearly: a mixture of desperation, avoidance of truth and cold calculation; followed by both madness and clarity, found in the hot sun of the dying human race. By tipping the film over the edge of the classical narrative into a surreal world that is both a logical continuance of similar sci-fi narratives from Hollywood that encourage naive hope, and an homage to European distortion of that hope, Ibáñez reminds the audience that while all might be lost for one, it might not be lost for another.

Do you feel this content is inappropriate or infringes upon your rights? Click here to report it, or see our DMCA policy.
Antonio BanderasAutomataBirgitte Hjort SorensenDylan McDermottGabe IbáñezMelanie Griffith