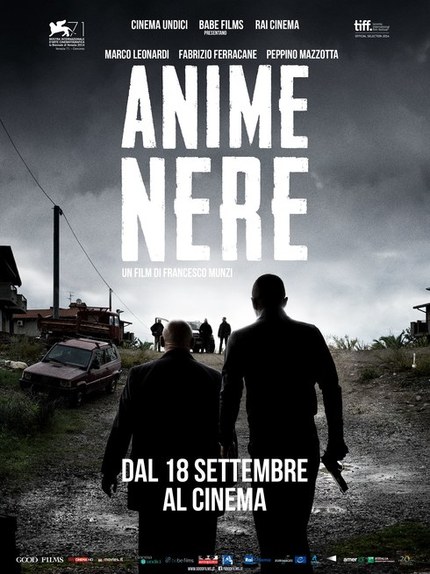 Italian director Francesco Munzi pulled off the difficult feat of being selected at both the Venice and Toronto film festivals - one of only a handful to do so this year - with his latest offering Black Souls (Anime Nere) and judging by the new theatrical trailer for this elegant gangster drama it's not at all hard to see how he did it. By being very good. Here's how Toronto pitched it:

A former narcotics trafficker now living peaceably in the Calabrian hills is drawn back into his family's drug-trade dynasty by his impetuous teenage son, in this darkly elegant gangster drama.

Six years after the Festival screened Francesco Munzi's Il resto della note, this talented Italian director returns with a Godfather-like tale that alternates between the cityscapes of Amsterdam and Milan and the rugged, dry hills of a small Calabrian village. At its centre are the Carbone brothers, the eldest of whom has turned his back on the drug operation that provided the family's stature and wealth. Having washed his hands of a dirty past, Luciano is now content to raise goats and live peaceably with his wife and teenage son.

The problem is that Luciano's son, the bored and restless Leo, idolizes his charismatic uncle Luigi, who is still deeply involved in the narcotics trade with his middle brother, the bespectacled mastermind of the family business. When the impetuous boy lets loose his frustrations one night, he doesn't know what trouble is being stirred up by his folly. In this tight Calabrian world where slights to honour demand retribution, all three brothers are pulled into a struggle where the odds are weighted heavily in favour of the most ruthless.

Do you feel this content is inappropriate or infringes upon your rights? Click here to report it, or see our DMCA policy.
anime nereblack soulsfrancesco munzigangsteritalytrailer