Review: THE TRIP TO ITALY, Very Funny, Yet Overly Familiar 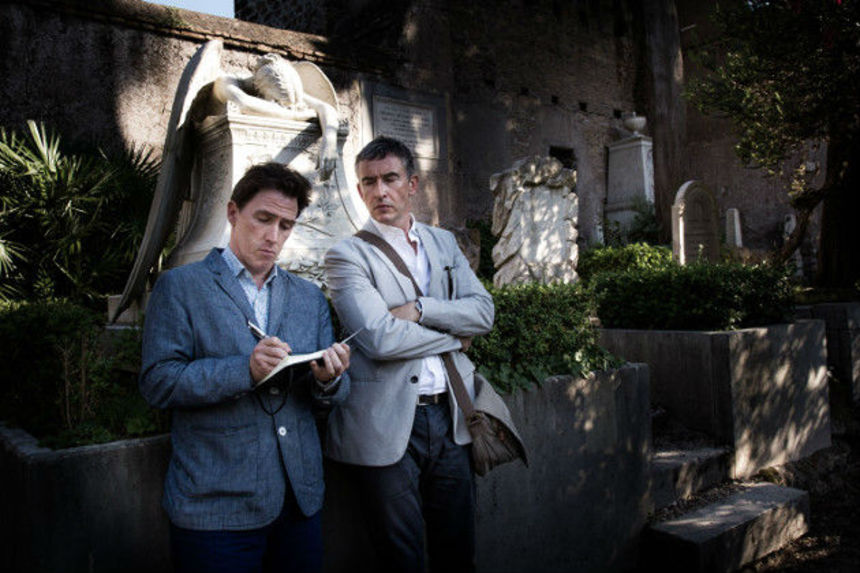 Michael Winterbottom's The Trip was an enormously pleasant surprise.

The 2010 UK TV series -- also cut into feature form for the international market -- was built on what appeared to be the flimsiest of premises, featuring British comics Rob Brydon and Steve Coogan as barely fictionalized versions of themselves as they drove around northern England reviewing restaurants. All the premise promised was two very funny friends driving around and riffing on one another, and while it delivered that in spades, it also delivered far more in the form of a surprisingly melancholic and richly rewarding performance from Coogan, wrestling with the toll his lifestyle had taken on himself and his family. The Trip was something of a perfect storm: a very, very funny piece of work that proved that not only didn't you have to sacrifice character for comedy but that getting the character stuff right actually made the comedy better.

Cue 2014 and The Trip To Italy. This time you only get the comedy, and while very often very funny indeed, it is just as often overly familiar and bereft of the more substantial underpinnings of the first.

The story? The setup? There really isn't one. It takes mere moments for Brydon to call Coogan up and say he's been asked to do another restaurant travelogue, this time in Italy, and for Coogan to say yes. We get no sense of where the duo are in their lives at this time, no larger thematic introduction. The start of the film really is as basic as the premise appears to be. And when the duo reprises the hugely popular Michael Caine impressions from the first while at their very first stop ... yeah. You're right in thinking that while this particular well may not have run dry just yet, it's not so far off.

Let me be clear: The Trip To Italy is still a very funny film, one loaded with smart dialogue and laugh out loud moments. But compared to the original, it's a relatively pale shadow. There's less of the sense that we're seeing into the real Rob and Steve, and far more of a sense that the duo are playing fictional characters. There's far, far less connecting tissue running through the trip itself, far less arc to the duo's personal journeys and what is there is ... well, basically Coogan has to deal with his son being bored on a trip to Ibiza with his mother -- tough life there, major meaningful crisis -- while Brydon has an affair because he can and wonders whether he should do it again. There's just no meat on these bones. Hell, there's barely bone on these bones.

Were this the first outing for Coogan, Brydon and Winterbottom, it would likely get a glowing endorsement as a hugely entertaining bit of fluff. But having proven already that they can do this and do it so much better, it's hard to look at The Trip To Italy as anything other than a disappointment. How disappointing will vary from viewer to viewer, based on their taste for Michael Caine and Hugh Grant impressions.

Review originally published during the Sundance Film Festival in January 2014. The film opens in select theaters in the U.S. on Friday, August 15, via IFC Films. Visit the official U.S. site for more information.

Do you feel this content is inappropriate or infringes upon your rights? Click here to report it, or see our DMCA policy.
Michael WinterbottomRob BrydonSteve Coogan