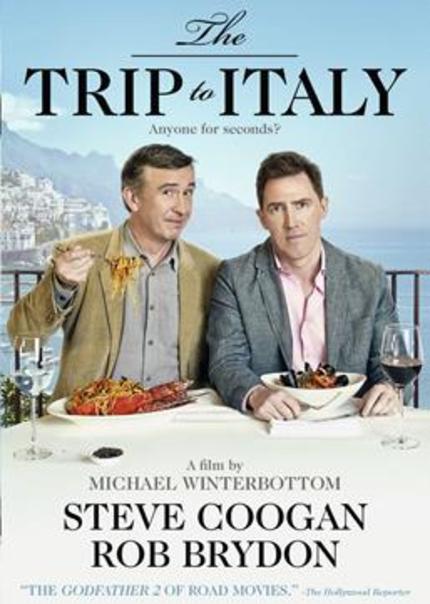 Available now on DVD and BluRay, Michael Winterbottom's The Trip To Italy once again pairs British comics Steve Coogan and Rob Brydon on a cross country food odyssey that involves at least as much off the cuff banter as it does any actual food. And the results, once again, are frequently hilarious. We know this because a) we've seen the film and b) we have a deleted scene to share with you and when the stuff getting cut is this funny that says rather a lot about the quality of what stayed in.

Michael Winterbottom's largely improvised 2010 film The Trip took actor-comedians Steve Coogan (Alan Patridge, The Look of Love) and Rob Brydon (Tristram Shandy, Little Britain) - or semifictionalized versions thereof - on a restaurant tour around northern England. In this witty and incisive followup, Winterbottom (The Killer Inside Me, 9 Songs) reunites the pair for a new culinary road trip, where they retrace the steps of the Romantic poets' grand tour of Italy. During their drives and between bites of fine cuisine, the pals indulge in some sparkling banter and face off against each other with celebrity impersonations. Re-whetting our palates from the earlier film, the characters enjoy mouthwatering meals in gorgeous settings from Liguria to Capri while riffing on subjects as varied as Batman's vocal register, the artistic merits of Alanis Morissette's "Jagged Little Pill" and, of course, the virtue of sequels.

Winterbottom trains his camera to capture the idyllic Italian landscape and the gastronomic treasures being prepared and consumed while keeping the film centered on the crackling chemistry between the two leads. THE TRIP TO ITALY effortlessly melds the brilliant comic interplay between Coogan and Brydon into quieter moments of self-reflection, letting audiences into their insightful ruminations on the nuances of friendship, the juggling of family and career, and the inevitability of growing old. The result is a biting and moving portrait of modern-day masculinity.

The clip below features the pair riffing on who should play Coogan in a biopic of his own life - and why - with Coogan showing a marked preference for Tom Hardy. Because, you know, that's realistic. Check it out below.

Do you feel this content is inappropriate or infringes upon your rights? Click here to report it, or see our DMCA policy.
deleted scenemichael winterbottomrob brydonsteve coogantom hardytrip to italy