Review: ARE YOU HERE, Still A Work In Progress For Matthew Weiner 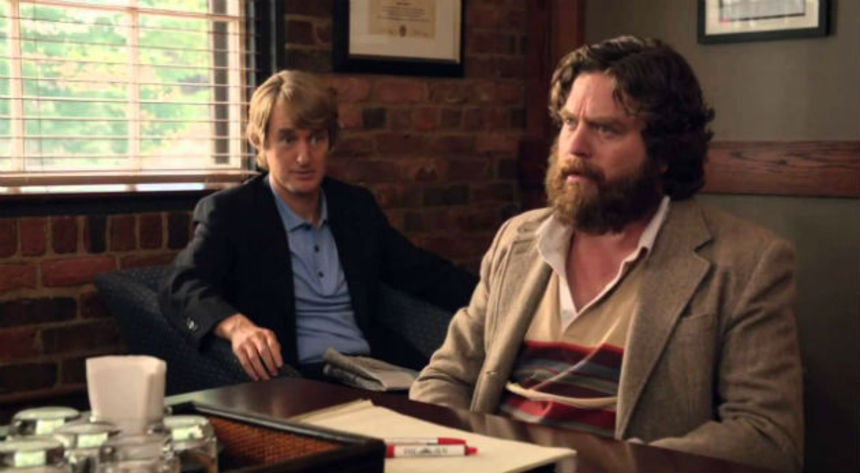 As a huge fan of Matthew Weiner's Mad Men, I've been eagerly anticipating his feature film debut, and so was disappointed to hear about the negative critical reaction to You Are Here when it debuted at the Toronto film festival last fall.

Weiner has since indicated that the film was unfinished. He edited it further, reshaping the material, and the refashioned project has been dubbed Are You Here (no question mark), which makes no particular sense. Without having seen the first version, I can't comment on the changes, but I can describe the new version as a movie that plays as though it's a work in progress ... that makes no particular sense.

Owen Wilson stars as Steve Dallas, a TV weatherman in Annapolis, Maryland. He spends most of his money on alcohol and many of his nights with anonymous women he kicks out of his crappy little apartment the next morning. (Unless he has the money for a call girl, which is not often enough.) When he's not fucking strangers, he's getting baked with his best friend Ben Baker (Zach Galifianakis), who lives happily in a trashed-out trailer, doing drugs and surviving financially on Steven's handouts.

The 40-something buds get a wake-up call when Ben's father dies. They drive to their hometown in southeastern Pennsylvania, a beautiful rural area known for its population of traditional Amish believers. Waiting to greet them is Ben's sister Terri (Amy Poehler), an uptight married woman who yearns for children, and so, obviously, is in constant conflict with the irresponsible Ben.

This becomes an issue, not only because their father was a successful, wealthy businessman with considerable property holdings in the countryside and a busy shop in town, but because in his later years he married the lithe, twentysomething Angela (Laura Ramsey), who is resented openly by the frowning Terri. Young Angela resembles a 60s flower child, a very open-hearted creature with no particular materialistic bent. When it's revealed that Ben has received the bulk of his father's estate, Terri is infuriated. And when Ben decides that he wants to convert his father's farm into some kind of new-fangled love and peace institute, it doesn't take her long to files charges claiming that Ben is mentally unstable and thus unsuitable to manage his inheritance.

While Terri and Ben tussle, Steve becomes attracted to Angela, which is initially understandable in view of her physical attributes -- i.e., she's a young, slender, attractive woman -- then becomes more mystifying the more she gently resists him. Steve satisfies his sexual urges with other women, but keeps returning to town, ostensibly to help Ben, but with the side benefit of spending time with Angela. Is it because she's unobtainable? 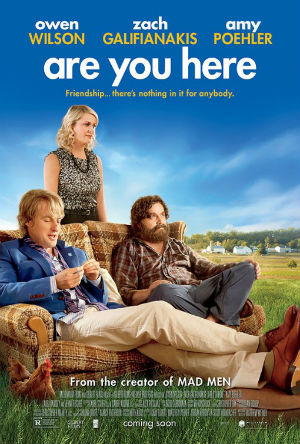 Maybe so, or maybe it's because Steve finally wants to settle down, and may have the opportunity to do so in the bucolic countryside thanks to Ben's promised largesse. Are You Here invites such bucolic contemplation because it's largely unhinged to reality. The running time passes pleasantly but slowly; we're invited to peer deeply into the lives of shallow characters who are living lives that are all too commonplace in their fictional construction.

Having cut his teeth as a writer/producer on the TV sitcoms Becker and Andy Richter Controls the Universe, Weiner appears to have come into his own as a writer and producer on the fifth and sixth seasons of The Sopranos, and reportedly wrote the original script for this movie between those seasons. In that light, it's easy to see why he would want to express a twisted version of family dynamics with a broader, more comic slant.

The movie starts and then pauses numerous times, as though -- yes, here's the cheap, inevitable comparison to episodic television --it were building up to a break for commercials. The performances are as uneven as the pace; Wilson is his usual, easy-going, occasional dramatic personality, while Galifianakis ramps up to his usual comic mania before easing down into absolute nothingness. Poehler has little chance to be anything but bitter and sour, while Ramsey, at least, continues to grow as an actress.

Unable to build any momentum, Are You Here putters along like a sports car powered by a lawnmower engine. It gets to where it's going, eventually, by which time it's lost its initial attraction.

The film opens in limited release in U.S. and Canadian theaters on Friday, August 22.

Do you feel this content is inappropriate or infringes upon your rights? Click here to report it, or see our DMCA policy.
Amy PoehlerMatthew WeinerOwen WilsonZach Galifianakis