Cornetto No More, But Pegg And Wright Brewing Up A New Script 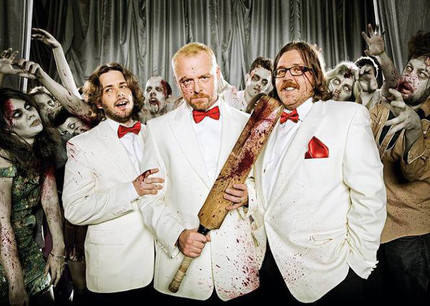 How do you bounce back after walking away from your shot at a superhero franchise you'd spent years and years developing? If you're Edgar Wright you get busy. Very, very busy. Wright's got a handful of projects bubbling at the moment but here's the one that is immediately going to jump to the top of everyone's list:

Though the Cornetto Trilogy of Shaun Of The Dead, Hot Fuzz and The World's End has come to its conclusion, Simon Pegg spilled in an interview on BBC6 that he and Wright have begun collaborating on a new script. He won't say what it's about. He won't say what it's called - though he does confirm they have a title. In Pegg's words: "Edgar and I were having a conversation the other day about it, and it has a title and everything. We're kind of into a creative cycle now ... We made three films in ten years and hopefully in the next decade we'll make another three. I really love working with those guys and I wouldn't ever not want to work with them. It's not even a question."

Note the plural 'those guys'. So, yes, that would certainly seem to mean that Nick Frost is back in the saddle as well. Yes, please.

Do you feel this content is inappropriate or infringes upon your rights? Click here to report it, or see our DMCA policy.
edgar wrighthot fuzznick frostshaun of the deadsimon peggthe world's end