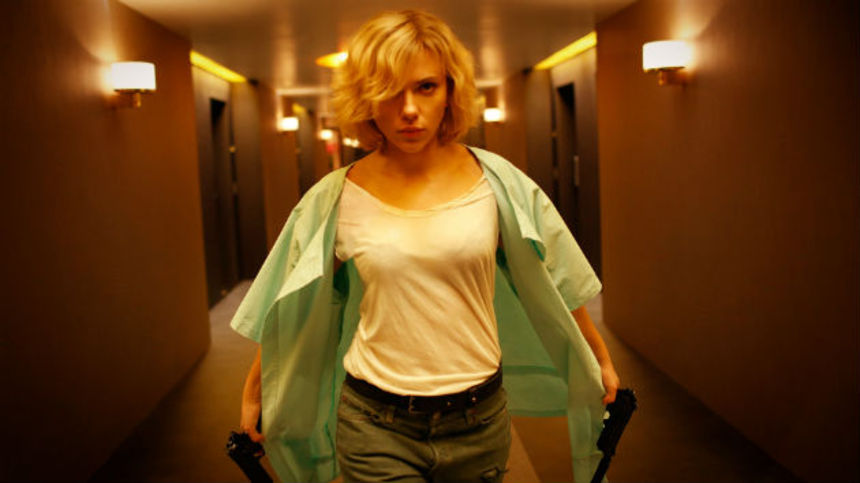 Luc Besson's new movie cloaks itself in scientific literacy, but make no mistake: Lucy is a b-movie through and through, a gloriously nutty concoction that would be risible if it ever took itself seriously.

Happily, it never does.

Featuring an absolutely feral performance by Scarlett Johansson, who is 100% committed to playing a woman so frightened that she is literally shaking in her stiletto heels, and also 100% committed to playing a woman so placid that she barely emits a heart beat, Lucy is based on the false premise that humans use only 10% of their brain capacity, at best. (For more on this, see the internet.) Luc Besson, however, does not need no stinkin' real science to make a kick-ass sci-fi action movie; all he needs is that shaky premise and he is off to the races.

Unlike, say, The Purge: Anarchy -- to cite a recent example of another movie with an implausible premise -- Besson delivers laughaby crazy adventures to go along with that illogical premise. He borrows action sequences liberally from whatever other movie thrill ride strikes his fancy, and makes it all fit together by pacing Lucy as though something is chasing it. Something is chasing it, of course, namely, logic and narrative coherence, but Lucy easily speeds past all possible objections, surfing on a tidal wave of earnest emotion.

Johansson is the eye at the center of the storm, an American studying in Taiwan who has made a bad choice in temporary boyfriends and finds herself with an experimental drug stitched into her abdomen. (Choi Min-Sik plays the ultimate in cool, slick, villainous movie drug lords. He's so evil that he doesn't have to speak English to be terrifying, which is quite a rare thing in an English-language action movie.)

When the drug is forced into her system, her capacity for using her brain quickly zooms HIGHER THAN EVER BEFORE IN HUMAN HISTORY -- yes, that point is made abundantly clear -- but she also becomes aware that the drug will kill her, so she has only 24 hours to, you know, do stuff, like shoot people without batting an eyelash and become, for all intents and purposes, a superpowered heroine with a very firm expiration date.

So, yes, what initially appears to be a Hitchcockian 'wrong woman at the wrong time and place' scenario is quickly slid off-screen, replaced by a classic D.O.A. plot -- the 1950 version directed by Rudolph Maté, if you please -- in which Edmund O'Brien is poisoned and must find his killer before he dies. In the case of Lucy, she has something else she needs to do -- no spoilers -- which lends the movie an additional layer of urgency that it really didn't need, but eagerly embraces anyway. 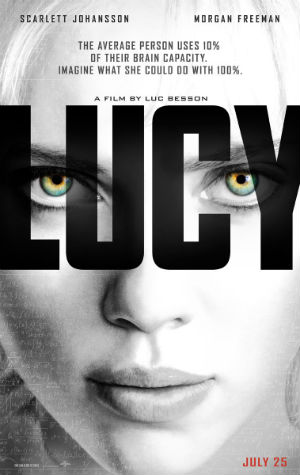 To be absolutely, 100%, crystal clear that the movie does not intend to be taken seriously (I hope), the opening sequences in which the unwary Lucy is drawn into a trap are counterpointed by scenes featuring animals suffering a similar fate. Besson then employs the same technique when Morgan Freeman gives a lecture about the capacity of the brain. Note: this is, literally, a lecture; Besson dispenses with the need for a character to provide expositional information in a clever and thoughtful manner by standing Freeman up in front of a crowd of attentive listeners who then ask questions that will be pertinent to the plot of the movie. It's brilliant.

Besson, who has been making action movies for more than 20 years in various capacities as a writer, producer, and director, knows what is absolutely essential for an action movie. Yes, it would be wonderful to have Lucy be a fully-drawn character, but Scarlett Johansson takes a skeleton and dresses her entirely with little more than mournful, yet alert eyes.

She nails, for example, an early, long scene, in which she talks to her mother; I don't remember much of what she said, but I remember the way she said it -- her naturally smoky voice helps -- sad and poignant and filled with regrets, knowing that her hours are numbered and that she will never be able to fully communicate to her mother the love that she feels.

It's mesmerizing, and the fact that it takes place while a frightened surgeon is operating on her without anesthesia is only a bonus.

Objectively speaking, Lucy is a decent, derivative action vehicle that's magnificently dressed up with sci-fi double-talk and globular special effects and slow-motion bullet battles and flying vehicular mayhem and a fantastic taste of cheese that's ripe for the eating. Subjectively speaking, it's as good as anything Luc Besson has ever done, and Scarlett Johansson is a true blue, red-blooded action star if ever I saw one.

And, yes, that's a recommendation.

The film opens wide in theaters across North America on Thursday evening, July 24.

Do you feel this content is inappropriate or infringes upon your rights? Click here to report it, or see our DMCA policy.
Choi Min-sikLuc BessonMorgan FreemanScarlett Johansson