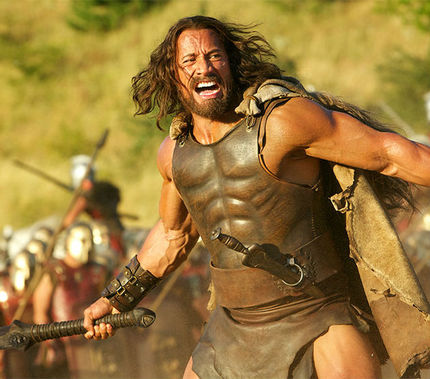 Brett Ratner may have finally found his niche.

Freed of a modern-day setting and any thought of realism, the director's inclination toward outlandish action takes flight almost immediately. The opening moments of Hercules are narrated efficiently; the story takes place a long time ago in a fantasy world far, far away from ancient Greece.

Thrace is the place, a mythical land filled with warfare and strife, a land where a mercenary Hercules (Dwayne Johnson) can stride freely with his small band of warriors, including his trusted lieutenant (Rufus Sewell), his prophet and advisor (Ian McShane), his trusty archer and token female (the very fit Norwegian actress Ingrid Bolsø Berdal), his nephew and storyteller (Reece Ritchie), and his mute and loyal friend (the great Aksel Hennie, another Norwegian given plenty of face time). They came to Thrace because of a high-paying job offered through the comely form of the king's daughter (Rebecca Ferguson), but the proposition sounds good and proper: All they have to do is conquer a mighty opposing force with an untrained army.

The movie focuses mainly on the epic fights but peppers the preparation and downtime with salty exchanges between Hercules and his team. Hercules is a good leader who is happy to showcase his team's unique abilities. Although he suffers from nightmares about the loss of his wife (Irina Shayk) and three children, he doesn't allow that to seep into his daily activities; he is a robust warrior whose positive attitude is infectious for the Thracian army in training.

Johnson makes for an ideal Hercules. Over the years, he has eased into the role of Action Hero, and is now content to allow his supporting players to nab good lines and get the better of him, acknowledging their superiority in individual moments. When he needs to be The Hero, however, Johnson easily rises to the occasion; he is a genial giant, but he can roar like nobody's business. He looks like he is giving the computer-boosted effects a good run for the money, too; while the movie makes it look he's doing more than is humanly possible, we have no doubt that he could do a lot of damage left to his own, unaided devices. 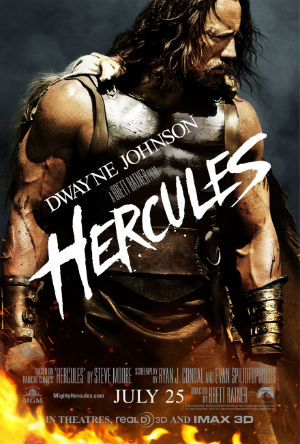 Sewell and McShane are extremely reliable standbys, stealing the limelight only as required, while the Norwegians are no slouches in the action sweepstakes. On the, er, less heroic side of the character equation, John Hurt shows that he is fully capable of playing a quixotic king, and Joseph Fiennes demonstrates why he was hired as well. Peter Mullan gets to growl and bark orders as a Thracian army commander, and looks to be enjoying his role tremendously.

The screenplay, credited to Ryan Condal and Evan Spiliotopoulos, is functional, similar to Brett Ratner's direction. Steve Moore's comic book Hercules: The Thracian Wars provided the original inspiration. The real stars are Dante Spinotti, director of photography; Jean-Vincent Puzos, production design; and Jany Temime, costume designer; they dress up the movie in dazzling fashion, even when the proceedings are entirely rudimentary.

The truth of the movie is this: it's not as terrible as I expected it to be. Silly me! It's a slightly above-average action movie, designed expressly for the gladiator-loving crowd, and displays far fewer of the directorial traits usually perpetrated by Mr. Ratner. It's straightforward when it needs to be, and in the context of its time period, the snarky jokes feel refreshing.

Who knew? Cheerful throughout, Hercules would look at home in a 70s grindhouse, an adventure movie for boys in which we know the good guys are going to win. Watching it in IMAX 3D, as I did, is definitely overkill, like eating a hot dog in a fine-dining establishment, but it's a pretty good hot dog.

The film is now playing widely in theaters across North America. More information is available at the official site.

Do you feel this content is inappropriate or infringes upon your rights? Click here to report it, or see our DMCA policy.
Brett RatnerDwayne JohnsonHerculesIan McShaneJohn HurtRufus Sewell

You had me at "very fit Norwegian actress" <3

Start working at home with Google! It's by-far the<- best job I've had. Last Wednesday I got a brand new BMW since getting a check for $5468 this - 4 weeks past. I began this 8-months ago and immediately was bringing home at least $70 per hour. I work through this link, go﻿ to tech tab for work detail

Ingrid Bolso Berdal is actually a brilliant actress. Check her out on COLD PREY and its sequel, or the medieval chase actioner ESCAPE. Or even in the wacky comedy/mystery series HELLFJORD.

And, yes, she went on an intense diet and training regiment to get super-fit and trim for this. Although she already looked just fine to me. :-P

I also fell in love with Ingrid watching Fritt Vilt and sequel. She is great, and she won the best norwegian actress award (which is called "Amanda Award" if i recall right...) both times!

It's kind of a bummer to see extremely talented European actors taking sidekick roles far beneath their talents in big Hollywood films. But at least you know they probably made a shit-load of money for it.

And there is a strong rumour that Ingrid is being eyed to be the next Bond girl. If that happens I'm just glad she has great, acclaimed work behind her so she might not get trapped by that label. You can't really say that about a lot of the others.

Never watched a Bond movie and never will, so I hope to see her in something else honestly, ahah

Start working at home with Google! It's by-far the best job I've had. Last Wednesday I got a brand new BMW since getting a check for $6474 this - 4 weeks past. I began this 8-months ago and immediately was bringing home at least $77 per hour. I work through this link, go﻿ to tech tab for work detail

Hope you're not sorry for her, because she chose the role herself. They all want to break into magical Hollywood, for some reason. Besides, maybe she likes those kinda movies, who are we to judge ;)