Review: GUARDIANS OF THE GALAXY 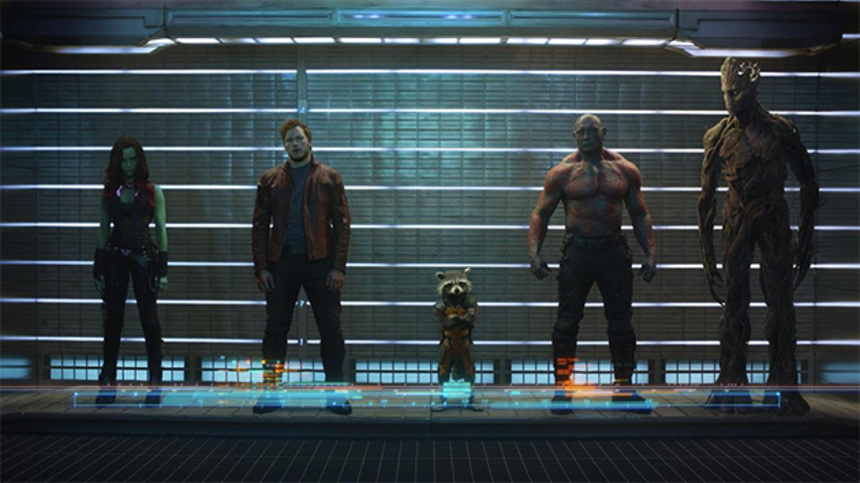 It starts with the soothing sounds of 10cc's "I'm Not In Love". Waves of reverb crash over the Rhodes electric piano riff, a building crescendo vocal harmonies that lead to the plaintive lead vocal line. Thus begins our look at "Awesome Mix 1", the cassette tape that serves as personal soundtrack for a young Peter Quill.

The opening sequence of the film is a flashback, and it's one that pulls few emotional punches. Sure, it's heavy handed (literally), but it demonstrates that James Gunn and his writers are trying something a bit different over here in this corner of the Marvel universe, adding in a bit more pathos to the proceedings.

Equally, there's a lot more overt silliness, and part of the charm of these characters is the way that they're heroic without needing to be particularly super. Quill's "Starlord" moniker is more joke than accurate description, and it's this cheeky self-awareness that makes Gunn, director of the sublime Super, so perfectly suited to tell this particular tale.

As your token non-comic book guy 'round these parts, I'd never even heard of these guys before the Marvel marketing machine brought it to my attention. A giant tree that only says "I am Groot"? A Beatles-inspired, genetically fucked with raccoon named "Rocket"? Sure, what the hell. For a guy that didn't know only a few years back that Tony Stark was Marvel's Bruce Wayne, kinda, it all seemed like more comic book drivel.

Yet I had hope when they picked Gunn, and for the most the film delivered on that promise. Tonally, it's quite a bit different than the other summer epics - it's droll, for one, with a whimsy that's refreshing.

This is the first giant-scale live action showcase for Pratt, and he does live up to what's required of him. I'm betting that Seth Rogen is a bit annoyed, given that clearly this role would have been more suitable to his proclivities than his turn as Green Hornet. Still, Pratt is more than capable of coming across as the sarcastic space cowboy with delusions of grandeur. While Pratt in minifig form will continue to be the highlight of his career for me, he does an admirable job at keeping the film together.

There's a slew of other fine performances, including a wise crackin' vocal turn by Bradley Cooper as Rocket, a deliciously green Zoe Saldana, and even an emotive Vin Diesel with but three words to work from in his vocal performance. The literalness of Dave Bautista's Drax wasn't mined quite as effectively as I would have liked, but he certainly looks the part of an otherworldly giant incapable of subtlety.

Plot wise we shift from a kind of Indiana Jones-y quest into a prison escape movie into a shoot-em-up. There's not much in the way of new ground tread here, but for the most part it's effectively entertaining. Action sequences are coherent if a bit derivative, but for the most part the film concentrates (rightly) on the interplay between the characters. The greater Marvel mumbo jumbo is at times distracting (should I care about the "Collector"?), and the "Wonder twins powers unite" notion of coming together is a nice visual way of making the story line's subtext overt.

With smaller character roles by the likes of John C. Reilly, it's these in-between moments that really shine. Elements from the background (like Groot reaching for a battery) are more effective than the eventual fisticuffs. In many ways, the film doesn't require a cinematic canvas, the explosions sometimes needlessly overwhelming the character parts. Yes, there's a Han Solo vibe to the thing, but equally there are echoes of Wheedon's Firefly show, a project that also had an interesting if somewhat flawed cinematic iteration with Serenity.

Whatever the stumbles, I did enjoy the film quite a bit, but I'm not sure it's something I need to revisit any time soon. The jokes work, but after a slew of teases and trailers, I'm also sure that they don't stand up too well to repeated viewing.

Yet like the (glorious) soundtrack, a mix of 70s shlock with deep soul grooves, there's something quite infectious and engaging about the work. For all its narrative baggage there's a real sense of fun at the heart of the film, a playfulness sometimes missing in the dour and overly pedantic mythmaking of other summer films. When all is said and done, sometimes it feels good to just feel the music grab you, to take that dance and sway as the Jackson 5 make a not-so-subtle plea for a sequel.

By its very construction Guardians of the Galaxy is trying to both be smug and self-aware, but also heroic and adventurous. For the most part the film manages to pull off this balance, making for a fun and many ways laudable film.

Guardians of the Galaxy