Destroy All Monsters: Can You Make A Movie About The Han Solo Character, Or Not? 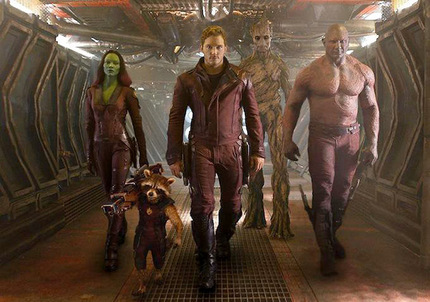 In Guardians of the Galaxy, five Han Solos walk into a bar. (Or a prison. And one of them is a tree, and quite a sweet one at that - not Han Solo-ish at all.) By the end of the film, these five outer space adventurers emerge as the heroes of their own story, "a bunch of a-holes" as the voice of Darth Maul puts it, not a peasant/pleasant Luke Skywalker among them.

As space opera goes, it's fairly refreshing, though it's hardly the first instance of the Han Solo character being the lead in a movie like this. Comparisons between Guardians of the Galaxy (read Jason's review here) and Firefly/Serenity have been free-flowing in the fan press, and if Serenity were the inception of the "bunch of a-holes" paradigm, Joss Whedon could have retired on patent money long before The Avengers.

But it's true that in big screen, swashbuckling, hero's-journey epics, centering the movie on the Han Solo character - the wiseass, disaffected, "this is all just a bunch of malarkey" guy or girl - can lead to some narrative trouble. Han Solo is, structurally anyway, the foil; he's there to counterbalance Luke's sunny optimism and right-for-right's-sake moral virtue with something more publicly distasteful (but privately appealing).

That latter bit is an important part of the popular mixture, if not the narrative one: characters like Han Solo are popular because we are all, no matter how well we're hiding it, fairly selfish. These characters are fun because they're a-holes like us, and they take the piss out of the surrounding narrative, something the Star Wars prequels pointedly lacked. They had hero characters, but no one around to imply that the hero characters were sorta dweebs.

But the dweebs are necessary, because without them, the narrative has no engine. (We may all be a-holes, but from an identification/catharsis standpoint, we're all dweebs, too - dweebs in need of a change. So begin all stories.)

Arguments about whether the true protagonist of Pirates 1 through 3 is Will or Elizabeth can progress from here (it's Elizabeth), but those films remain a writing marvel in that the requisite monomythic spine has been economically grafted onto characters who turn up far less than the star attraction, and yet are nonetheless holding the whole story structure together, right under Jack's nose.

For proof, one need look no further than Pirates 4, where the "superfluous" Will and Elizabeth were shuffled off (an improvement according to Roger Ebert, who really oughta have known better), and the resulting movie is a dramaturgical mess.

The problem with a dyed-in Han Solo character like Jack Sparrow is that past a certain point, such characters aren't capable of being anything else. They can't change, arc, or turn. And when there's no narrative arc to invest in, no matter how small, the movie functions differently - and, I'd argue, less effectively - on a basic, gut-feel level.

Guardians of the Galaxy isn't raking in money and popular acclaim because of its action sequences, or even because of the sunny emotional Viagra of its diegetic mix tape (though that cuts a bit closer to the core). It's doing it because, at the end of the day, it gives its a-holes an arc. It's yet another story about yet another group of a-holes learning to be something other than a-holes.

The lovey-sappy, we-saved-the-world-by-holding-hands stuff in the last few scenes of the film might seem like a surprising tonal shift for the movie, but they are exactly the point, and the movie isn't even coy about it; the emotionalism was buried throughout, the exact sort of dweebiness that Peter Quill and his gang might think they are trying to get away from, but desperately need, in spite of themselves.

The very first scene is probably the most painfully heartfelt Marvel has ever put together, as 8-year-old Peter Quill is made to say goodbye to his cancer-ridden mother, and it's the gravity well around which all the space shenanigans orbit thereafter.

One unfortunate corollary: if you're going to base a movie on the Han Solo character, at the end of the movie, they aren't going to be the Han Solo character any more. (This even happened to Han Solo, between Empire and Jedi.) They have to mature just substantially enough to allow for the plausibility of their narrative arc; they can't be in it for themselves (or even "a bit of both," as the Guardians claim) when all is said and done, or the emotional resilience of the finale falls flat.

One more thing. What a magnificent piece of pop cultural confection Guardians of the Galaxy is. With its soundtrack pilfering from the post-modern mix tapes of the Tarantino/Anderson '90s independent film era, which themselves ironically re-cast the rock ballads of the '70s and '80s; and with its cast of "I don't care" a-holes coming together to save the galaxy, Guardians is the perfect tonic for not just the doom-obsessed summer of 2014 we've been having at the movies, but the whole hipster generation of a-holes that got us here in the first place. I hope it makes a billion dollars.