Review: DAWN OF THE PLANET OF THE APES Doesn't Monkey Around 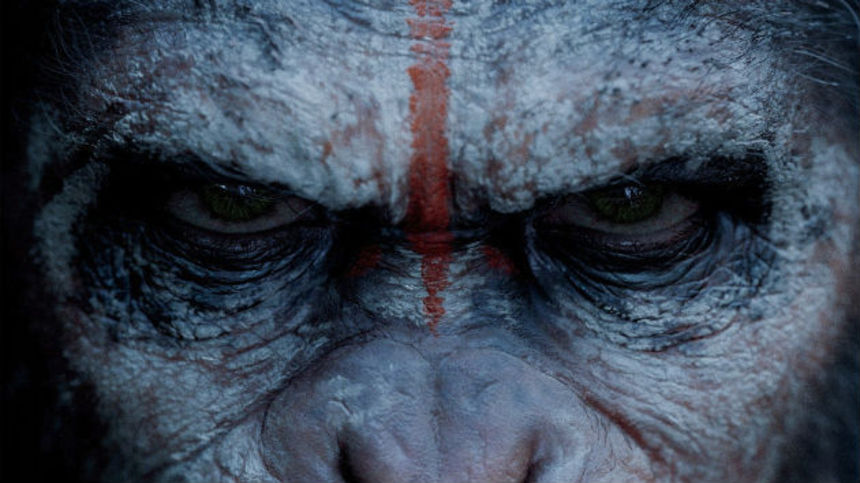 There will be plenty of hyperbole flung about in celebration of this film with the joy and abandon of an ape playfully lobbing his poop at an appreciative audience.

Yet like the scatological simian show at your local zoo, there may be those that fixate on the repellent parts of the display, annoyed perhaps by the fact, they may claim, that this latest Apes film feels like a previously enjoyed meal - something familiar, sure, but no longer sustaining after passing through the process that created it, a waft of desperation and creative emptiness that's indicative of this "Summer of Sequels", a now annual occurrence that's as much the new normal as the forthcoming ravages of global warming.

In other words, some people just won't like this shit.

To beat this digestive tract metaphor even further, though, with this film you really do get out of what you bring to it. I'd recommend plenty of patience, an appreciation for the current state-of-the-art when it comes to motion capture and CGI presentation, and a heaping amount of pleasure when you see an army of chimps riding atop horses.

Like another image from what, to date, is this summer's (soon to be any summer's) biggest film, there's something amazingly cathartic about seeing a creature riding another creature into battle. Before we get to that moment, however, the film contains moments of genuine beauty.

For a huge chunk of the first act, we've got chimps signing to each other while subtitles provide the meaning to the audience. This is perhaps the most engaging part of the whole film - yes, the action is great, and the eventual confrontation well earned, but there's some particularly stunning moments of cinema in those early stages. Sure, I'm a sucker for such scenes (see: 2001: A Space Odyssey), but the film beautifully sets up what's to come with these introductory moments.

Implausibly well-directed by Matt Reeves, the astonishing performances by Andy Serkis and his other mocap partners, along with a veritable army of technicians and graphic artists, make for some of the most subtle and remarkable performances captured, digital or not.

The inevitable call for serious recognition for Serkis' work is already taken place, and whether or not the notion of a "collaborative performance" Oscar ever comes to pass, it's clear that we really have fully and finally transcended into a new kind of acting that's no longer hampered by the technology, with the graphics quality and the capturing of micro-expressive performance absolutely approaching even the wildest dreams of Lon Cheney or Willis O'Brien.

The film begins and ends with a pair of eyes staring at us, the audience reading the emotions and thought processes going on behind that stare. Whatever occurs behind that bookend, there's still a sense of distance and otherness, but also a familiarity and inevitable "humanness" that we ascribe to that glare.

The central metaphor at the heart of the original Apes film ("Oh my God, I was wrong/It was Earth all along") was dropped in the last film in favour of a more straightforward, Outbreak-like conundrum. Even if you haven't seen the latest iteration, Dawn does a decent job of setting things up without feeling redundant. 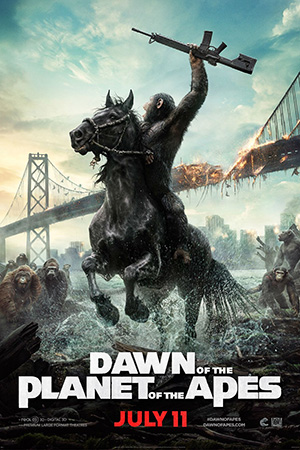 There are human characters still around (spoiler!), and the likes of Jason Clarke, Gary Oldman and Keri Russell do a satisfactory job of playing second banana to a bunch of gorillas. Clarke in particular seems to get the tone down perfectly, while Oldman seems to be trying a bit too hard to play morally ambivalent.

Yet by far the most engaging moments of performances are with the apes themselves. There's a scene involving Koba (played by Toby Kebell, and aided by that army of techs previously discussed) that's just sublime, his rollercoaster of displayed emotions a triumph of story and execution.

Serkis' Caesar is once again the core performer, and remains the key to entering the world of the film on its own terms. There are some lovely and inviting movements that draw us into these characters. There's a Shakespearean motif this time 'round, with plenty of court betrayal and the like (I admit to thinking "Et tu, you filthy brute?" as a particularly appalling pun midway through). The story plays out in a satisfying way, hitting moral, political and genre beats as necessary without ever feeling particularly forced or disjointed. Sure, the metaphors are heavy handed, but that doesn't take anything away from the power of their statements, nor from how effectively they're presented.

While the film sets up future episodes, promising bigger and more substantial battles, it's hard to see how the themes of this series can be better or more satisfyingly articulated than with this film. This is about as good a film about a bunch of rampaging apes as we're likely to get, with the right mix of story and philosophical examination that set the 1960s original apart from being just another guys-in-rubber masks B-movie.

Dawn of the Planet of the Apes is bold and brash. It's an action movie with plenty of ideas percolating behind those eyes that stare back at us from the screen. It's a blockbuster with a bit of a brain, and for all the fine action sequences and moments of bravado, it's core success lies in its quietest moments where communication and cooperation supplants fear and confrontation.

In other words, it's shit well flung.

Dawn of the Planet of the Apes