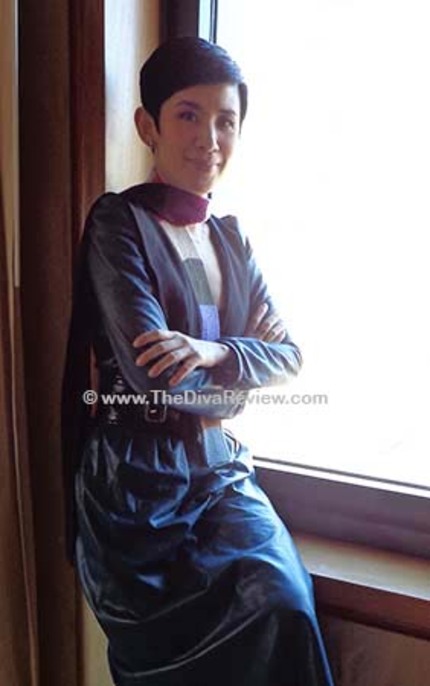 With a career spanning over a quarter century and some hundred films to her credit, including the Young and Dangerous series, a bunch of movies with fellow HK legend, Stephen Chow, and both her own incredibly popular Golden Chicken installments, Sandra Ng is the undisputed queen of Hong Kong comedy.  The New York Asian Film Festival decided to make the title official by presenting her with their Star Asia award, at which Ng introduced the newest chapter about the hooker with a heart of gold, called Golden Chickensss.

The Lady Miz Diva:  How do you feel about receiving the New York Asian Film Festival Star Asia Award?

Sandra Ng: In the beginning, they told me they were going to present this award in Lincoln Center: Lincoln Center is famous and Lincoln Center is huge for me, okay?  I knew they'd never presented to a female actress before, so I was so honored.  So, I tried to juggle my time and I came.  They gave me the title of the Queen of Comedy {Laughs}. I just thought of it, the queen of comedy, because I've been doing this - I've been in comedy for over 25 years, even if I say I'm number two, nobody would actually dare top me.

You've brought your newest film, GOLDEN CHICKENSSS.  What made you return to this series after so long?

Because the first Golden Chicken was released in 2002, and the second one was in 2003; and because these two old movies were repeated on the classic TV channel, they're always repeating.  And every time when I was home, I would turn on the TV and when I saw myself on Golden Chicken one and two, and I kept thinking, it's a really good movie {Laughs}.  It's really, really funny, and I think the audience liked it.  And suddenly last year, I had this idea that crossed my mind; I think I should make a new one.  These two movies have been promoted for 12 years, so audiences like this character, so they are very familiar with this character.  And I don't know, in Hong Kong nowadays, there aren't many comedies, so I really wanted to make a happy comedy.  So I started this idea last year, and I tried to organise the people, and this is actually the second film I produced in my life.

It's really, really tiring work.  This time I really tried to organize everything by myself.  I didn't want to only use my name to be a producer; I really wanted to know every step and every single detail and every single nail - I wanted to be involved.  Of course, the first thing I needed was a scriptwriter, and a director {Laughs}.  So I tried to be involved in every single detail and this is how I tried to learn another role in my career.  Because I've been in this film industry for at least 25 years, so I wanted to try.

Yes, but not now.  I hope I can try to produce maybe 2 to 3 movies before I do that.  I want to be a director one day for a story I really want to tell, because I don't want to just have a script that people gave me.  I want to be involved in that story.

All the previous Golden Chicken films are written and directed by other people, but did you have involvement in the scripts of those, as well?

In the previous ones, I was involved a lot, because the first one was produced by my husband, Peter Chan, and I was involved a lot in discussions of the script and so many of the details of the story we created as a group; the scriptwriter, the producer, the actors, and also the director.  Actually, I didn't really want to be involved a lot, but then I became involved because comedy is so dependent on the actor; the performance and the timing is really important for comedy, so that's why I was involved a lot, to estimate my talent.  So, from the beginning, the first Golden Chicken, I was always involved a lot.  And also, especially in comedy, you have to be more improvisational on the set.  Sometimes on the set we have to discuss at least maybe for an hour, because the shooting time is not that long, but we discussed an improvisation that is longer than the time that we would shoot.  This is a very important procedure before we start shooting.

That leads me to a question about your preparation: When you are getting ready to play any comedy role, do you look at it and think, I've gotta be funny, or do you play it straight?

Of course I have to know the character well, then I can create funny and make it funny, because I've filmed over a hundred movies, so every time I'm really trying to think about how to put more in the characters. Of course, some characters I'm repeating in different movies, but I really try, try, try to work harder on different characters.

In this country, there was a statement by a well-known journalist that said, "Women aren't funny" that sparked a big debate, and every few years someone brings it up.  Does that feeling exist in Hong Kong?

I think this is not about culture; I think every woman, they want to be not vilified, but the thing is, you know, they actually all want to be beautiful, so being funny goes against the veneer of perfection.  I think if they never studied in acting school, I think from the day were born {Laughs} they were educated to be a princess.  So, being a comedian, especially a female comedian, you have to overcome so many obstacles, including psychological ones.  So, if they were not trained to be a comedian, and maybe if the producer and director think they can manage the role, they can try to, but they still have to stay in their species.  So maybe they don't have many chances to practice the skill of comedy.

I watch your films and I think, 'That woman so brave,' because you put everything out there regardless of what outrageous thing you say, or how silly you might look. Is there such a thing as going too far for you in comedy?

I don't know.  I never think about this, because in the beginning, I really wanted to de-accentuate anything that was beautiful, so in the first movie, I didn't even know that I enjoyed it so much because after the first movie people kept saying, 'Wow, you can do this. You can make yourself ugly,' or 'You can do something a female wouldn't accept to do themselves' - brave.  But I really enjoy it because I think, 'It is not me,' I just create a character, so I'm never mixed up with this.  And I don't know, I think people's feelings are mixed up because maybe they think this is part of you...  But because I'm so simple - of course I enjoy creating a character, but I'm not really so calculated, or too complicated to explain that I was not the one that you saw in the movie, I'm not that kind of person.  I'm just an actor, I'm just an actress; I just created something funny and play those roles that I create.  But of course, I'm a very optimistic person, of course, in my genes, I'm funny.  I'm simple, so I can create this kind of character that you watch in the movies.

It feels like there's a growing movement of Hong Kong filmmakers who don't care if their movies are seen in Mainland China and they are freer creatively. Your films always feature outrageous situations and dialogue that I'm not sure would be allowed in Mainland China. Is the possibility of being seen there a consideration for you, or are you only concerned with making the purest film possible?

You know, Mainland China is a huge, huge market, and the population is very big, but I mean, even different provinces, they have different cultures and our mutual language is Mandarin, right?  So, I think Mandarin is my obstacle and also the culture.  Okay, if a Mainland China director uses me in their movie, of course they can create a character that I really can manage, but finally the culture; it's a big difference.  I'm not trying to put much effort into breaking through or going to Mainland China, but I really still enjoy comedy.  So comedy has its own culture; I grew up in Hong Kong and of course I want to do something that I'm very familiar with, so why do I have to think about that, or try to struggle to do something that will make people happy and that is simple, but I would really have to conform to the language, to the culture, everything.  The chances are very low for a Mainland director to use me.

You're very fine dramatic actress as we've seen in ECHOES OF THE RAINBOW.  Is drama something want to do more of?

I always think that making people cry is easier than making people laugh.  I always think that because in the dramatic movie, so many people can help you; the editing, the music, the plot, the story, and of course, if you want to be a success, you should be talented.  But I think making people laugh just all depends on the performance and timing and I always say the director and the script are not very helpful {Laughs} because you have to do it on your own, you know?

Do you feel this content is inappropriate or infringes upon your rights? Click here to report it, or see our DMCA policy.
new york asian film festivalNYAFF 2014Sandra Ng