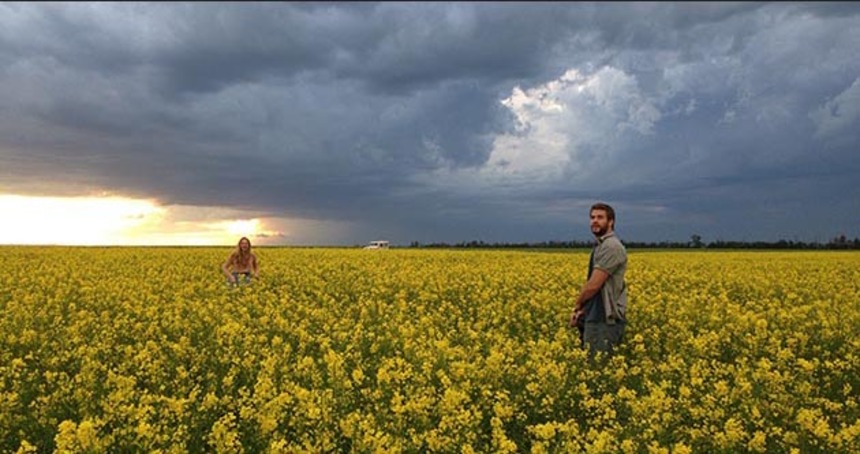 It's no easy task to write a crime thriller script that is both tense and comedic. But even when a writer is able to pull it off on the page, an even more difficult task awaits a director to nail that tricky tone.

In his Black List-gracing feature screenplay Cut Bank, Rodrigo Patino, a writer on the FX series Sons of Anarchy, delivers on the first task. Luckily, TV and theater director Matt Shakman, perhaps best known for his work on It's Always Sunny in Philadelphia, is no slouch either. The result is the perfect mix of those two popular television shows; a tense and captivating thriller that is also filled with laughs.

While it might sound like a macabre title, Cut Bank actually refers to a small town in Montana that serves as the film's dramatic setting. The story opens when young Dwayne (Liam Hemsworth), and his girlfriend (Teresa Palmer) witness the gunning down of the town mailman, played brilliantly by Bruce Dern. Dwayne also coincidentally video tapes the murder, and after taking it to his girlfriend's father (Billy Bob Thornton) and local sheriff (John Malkovich), Dwayne discovers that the tape makes him eligible for a big reward from the US Postal Service. But when the town weirdo (Michael Stuhlbarg) starts violently interrogating people about his missing mail, Dwayne ends up in his crosshairs, and we learn that this whole event might not be quite as coincidental as we assume.

You've probably heard of a slow burn thriller before, but Cut Bank is more of a slow burn comedy. The first thirty minutes play out relatively straight as the stage is set and the crime drama unfolds. Then the laughs start to creep in. In a particularly funny moment, the town's former Miss Cut Bank from 1987 encourages Palmer's character to compete in this year's pageant by whipping out a trading card style photo of her winning the prize. It's the sort of strange levity that clues the audience that maybe we shouldn't be taking this too seriously.

The cast is excellent all around with a particularly funny performance by Bruce Dern. Oliver Platt also shows up in a hilarious role as the Little League-gambling postal inspector from Bethesda, MD. Against all this funny talent, Liam Hemsworth almost seems too buttoned up in his straight man role. While it isn't distracting, the Hunger Games star might have been better served if his character was allowed a bit wider range of emotions.

Nevertheless, Cut Bank pulls off a feat that few films are able to do; creating an intriguing crime thriller and making it funny as well. Too often in Hollywood, the excuse is told by studio execs to writers that their work is a great spec script, but just too hard to make work as a movie. This is what it supposed to look like when a great spec script becomes a movie -- and in Cut Bank, it most certainly works.