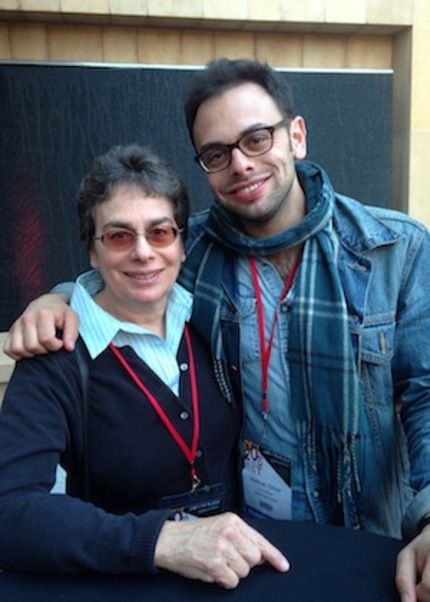 You think running a set in general is hard? Try doing it with your mother.
In an IndieWire article where filmmakers were asked what they wish someone had told them before they started shooting, Uncertain Terms writer/director Nathan Silver answered: "Don't cast your mother in one of the leading roles, have her host your cast and crew, and expect her to be happy."
Silver's motivation for doing so though lies in a very obvious respect and admiration of his mother.
"She's the master of confusion," he says. "Her stories go every which way, but she manages to bring life to everything she says. She knows that life is confusion. I cast her in my movies because the confusion of life is what I'm after."
Cindy Silver admits that she only concedes because she loves her son. Otherwise: "I don't enjoy acting or seeing myself up on a screen or hearing my voice."
Love will make us do crazy things.
The whole story behind Uncertain Terms came from the desire to tell his mom's story of how she got pregnant with his older brother - 16 years his senior - at age 16.
"I'd always wanted to address this aspect of my mom's life in a movie," he explains. "She was sent off to a home for unwed mothers on Staten Island, and her parents told everyone she'd gone to California to get over a heartbreak. When she came back with a baby, my grandfather told all the neighbors that if they couldn't accept it, they could go fuck themselves."
I was able to coax some pretty amazing stories out of Mrs. Silver about her son, about herself, about filmmaking and about the life of a filmmaker's mother.
On Her First Time On Set
"I believe the first time I acted in one of Nathan's films was during the shoot of his short film in the early days of his career [With or Without Reason]. It was a very small role. I was so exhausted from having my house turned upside down for scenes and putting up crew and catering the food that I just went along with the request/order from my son. My scene was fun, though, because Jim [Chiros, who plays opposite her in both the short and Exit Elena] is a friend and a brilliant actor. He pumped up my confidence and made me laugh hysterically during the shoots...and reshoots...and more reshoots."
"I loved that short film, every second of it. Except for how my neck looks saggy as I turn sideways in my mother-of-the-groom scene. It was a shock to see myself on film looking old and hearing my voice sounding so deep and different from how I imagined it to sound. Now I look back with nostalgia for the early, naive days of watching my son begin his career as a director, scriptwriter, filmmaker and actor. Every sound, every location, every scene is as fresh in my mind as the days it was shot. It was an honor to be part of the whole filming process, and to watch in awe as my shy son blossomed and directed all of the actors and the crew. It was an amazing experience."
On Raising An Artist
"Nathan and I have a very complicated relationship. He has been driven by art since he came out of the womb, so raising him has been very exhausting, but very exhilarating."
"The actor/director dynamic is similar to the mother/son dynamic, because he has ordered me around his whole life as he evolved from a dressed up three-and-a-half year old, Native American-inspired in homemade loincloths and buffalo skins, to the Thundercat Lion-O outfit that he created and wore every day for a few years. Every day was filled with artistic expressions and frustrations from this special child."
"At age six, after being home with five strep throats in a row, he discovered drawing. He'd seen the Batman movie, which had frightened him, but that led to thousands of artistic attempts to draw exact scenes from the film. Incidentally, Jim Chiros was a friend of the family at the time, and a genius in art, and was in awe of Nathan's art skills. He really encouraged him."
"Our relationship was a very close one, and one devoted to keeping him comfortable in his angst-ridden childhood. Obviously, he was an artist when most kids were interested only in baseball cards, but he collected them too, and played softball and baseball, and biked and did all the normal stuff, but always being very hard on himself. He studied things, and I realize now that he was creating movies in his mind when he was viewing everything in day-to-day life. Our backyard became a railroad track with he and his friends dressed like the boys in Stand By Me. Nathan directed the scenes as he and his friends lived the movie out back. His friendship was an interesting one for his friends. There were always swords and capes and outfits and acting and creating in my house."
On Acting In Independent Cinema

"My favorite part of acting is watching my son's visions come to life up on the screen, and watching the other actors on set. If his friends ask me to, I will always support independent filmmakers, and be a good sport and join the fun."
On Her Son's Directing

"Nathan's strength is his total vision of what he sees in his mind, and what he wants filmed and how he wants this done. He easily lets a scene evolve if it isn't working, and gives his actors the leeway to make the roles work for them. As in everything he does, he is driven by this amazing creative force and energy, and that can exhaust those of us being directed in his films. We do not stop being filmed or rehearsing until someone starts crying - usually me - after 18 hour-shoots with no air conditioning in the middle of a Massachusetts summer."

:As in his art and poetry and playwriting and snowboarding and studying the French poets and the French language, he has insurmountable energy, and doesn't take no for an answer. This quality has led to his extraordinary output of great films, but it has worn out his mother and his father, and maybe some friends along the way. But we all respect his gift and want to give him our all. As his mother, and Harvey as his father - who helps produce, fund, photograph, edit, give sound advice as an executive producer in life, encourage Nathan, act in his films also, allow his house to be invaded and redone - find him to have a myriad of strengths."
"If not being sensitive to others' needs is a weakness, or being creatively stubborn, then he has a weakness, maybe. His most annoying trait as a director is not realizing how exhausted the crew or the actors are, and not just stopping for the day. But he certainly gets lots done."
"I just went along with the request/order from my son, and I love each and every moment of each of them. They are like a ladder leading to his three newest films. I stand in total awe of my own son. I also love him, and his brother Eric, and my grandchildren, and consider them my greatest creations."

Uncertain Terms had it world premiere last week at the Los Angeles Film Festival. It will have its international premiere at the Edinburgh International Film Festival on June 24 and then screen at FilmFest Munich starting June 29.
Tweet Post Submit