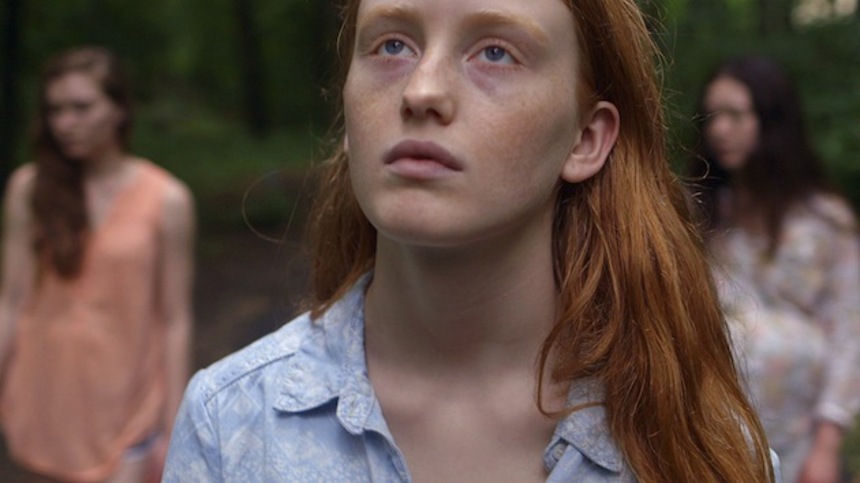 We are walking down a serene wooded path. With our back to us is a redheaded girl, her hair in a long, tight braid, her shoulders slumped forward. She's walking through the woods, pondering her very existence: Why is she here in the woods? Heck, why is she anywhere? And hell, where should she be? She puts a phone to her ear. And waits. And waits. For an answer. There's no answer. It goes voice mail. Unsatisfied, she hangs up and turns toward us... a hand sits on the little bump of her belly. She is pregnant.

The opening scene of Nathan Silver's fourth feature film sets much of the mood for what is to follow. An intimate, equally meditative and tense atmosphere pervades this tale of community, family, delusion and responsibility. Like in his previous works, Exit Elena and Soft In The Head, Silver and his close collaborators, producer/co-writer Chloe Domont and cinematographer/editor/co-writer Cody Stokes, craft a story around what could be described as a non-traditional family unit. It's something just enough out of the ordinary, but still very much a real thing, to find it fascinating. Carla (Cindy Silver) runs a home for pregnant teens who are in need of some respite from their often hectic family lives, plus the proper lessons on becoming a young mother. As Carla herself had a son at sixteen, she feels obligated to take on this mentor role, though she often seems overwhelmed and exhausted by the task.

Carla's 30-year old nephew Robbie (David Dahlbom), arrives from the city, marriage on the rocks. He's looking for some solace in the form of some simple manual labor Carla just can't get her own adult son to do around the property. With a weary, serious demeanor, Robbie gets to work, but not without catching the attention of the five girls who live at the home. Namely our redheaded friend from the opening, the quiet and intuitive Nina (India Menuez), plus the promiscuous Jean (Tallie Medel).

What's fascinating about the scenario here is that in someways it could read like an updated, Americanized Grimm's Fairy Tale. There's a serene yet somewhat gleefully dark if also solemn bent to the film. What's dissected here is the grounds for a clean cut moral. Uncertain Terms doesn't have one. If anything Silver and company strive for a naturalism that showcases empathy for all parties involved. With his wife having cheated on him, Robbie feels betrayed. He awkwardly thwarts the unwanted advances from Jean, but begins to think he is falling in love with Nina, who in turn is struggling with her overly aggressive if lazy boyfriend. Robbie feels a responsibility for Nina, even a need to care for her baby, and though she's figuring stuff out (and maybe even better than he is), she accepts his friendship because there is a spark between them.

Where Silver places the audience isn't on the side of Robbie's idealization, nor in Nina's contemplative uncertainty. Like Carla, or Jean, or Cammie (Hannah Gross), or any of the other girls, we are another occupant in the house, sitting comfortably, intimately in between it all. We have enough space to recognize Robbie's delusions of romance, his need to assert himself into caring for someone almost as a defense mechanism. But we can also hold him close enough to care and to understand why Nina appeals to him so greatly. And yet we can sense other paths for Nina. It certainly wouldn't be in her best interest to go with a 30-year old married man, nor necessarily stay with her boyfriend. 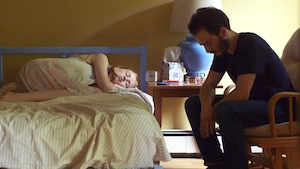 Uncertain Terms sheds much of the manic and chaotic nature of Silver's previous films. While the "interloper enters and drama ensues" motif from Exit Elena and Soft In The Head remains, Uncertain Terms doesn't pit its characters so aggressively against each other as those films did. Nina and Robbie come together in their frustrations, and in turn reveal that they themselves are probably their own greatest antagonists. This paves the way for a film that is Silver's most introspective and mature work yet.

For if anything this is a film about taking responsibility for oneself as well as others. It is about  becoming an adult. Or else the assumption that one must do this for, in the film's case, a plethora of reasons. This is what it is about, but make no mistake, there are no clear cut answers that get us to clean resolutions. We are very much left in the tumult of all these feelings and challenges. Because these realizations do not plateau or end, they keep rising up in front of us, and we, in turn, have to rise up again and again to meet them. Will Robbie be able to set aside his misguided romantic aspirations and accept this? We just don't know, and that is where the humanity, the hard-edged empathy of the film lies. We too have to accept that making a choice can be hard, but in the end we have to make a choice, whatever it may be.

What sells this authenticity so deeply is the wonderfully nuanced chemistry between Menuez's Nina and Dahlbom's Robbie. With barely a glance across the dinner table you can see why the two could live together and love each other. It is this ease that props up the whole film: from its humor, to its anger and sadness, to its entertaining supporting cast and rural setting. It's easy to spend time with these people in this place. It is both a joy and a struggle to sit with them in their days (and daze). Silver's playful, partially improvised directing style breathes life and inspires each frame of the film. His actors are more or less just people passing through someone else's gaze rather than constructs or symbols on screen.

On a direct personal note from me, it's been very fascinating to see, and write about, three films from Silver in the last 18 months. Witnessing the development of a filmmaker's voice, and having the opportunity to talk about that as a critic in as close to real time as possible has been a delight. To not mention this self-lineage that is running through Silver's healthy, ever growing filmography is nearly impossible with each new film and new review. Each one links to the next in obvious or subtle ways: Silver's Cassavetes-like approach to storytelling, his penchant for female protagonists and humor derived from increasingly awkward situations; his themes of wayward youth, alternative families and community. And of course there is his consistent casting of his effervescent mother Cindy Silver. And then there's that ability to cultivate a small filmmaking community, to make these low-budget, fly-by-the-seat-of-your-pants home-style movies that just keep getting richer and more rewarding. I revel in this stuff.

But I am aware that only a handful of readers get the opportunity to see these small gems. So if anything, here I am once again as an ambassador: Go watch Exit Elena on Vyer Films or Fandor. Keep your eyes peeled for a home release of Soft In The Head. Uncertain Terms has its international premiere at Edinburgh next week, and will no doubt have a healthy festival run this year. And if you're in LA, go see it tomorrow night at LAFF. Silver and co. go into production on their fifth feature later this summer, so don't you want to be ahead of the curve?

Because as it is, Uncertain Terms further solidifies Silver as one of this generation's most intelligent, adventurous and accessible American filmmakers.