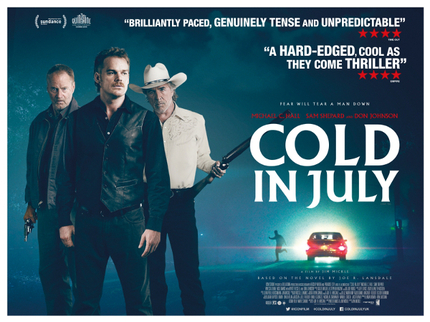 Quite possibly the most widely acclaimed US director to not yet break through in a significant way on his home soil, Jim Mickle boasts multiple selections to Cannes and Sundance on his resume without a single one of his films receiving a wide theatrical release on US soil. Which is baffling, really, as he's gone from strength to strength as his work has evolved and while he certainly doesn't cater to mainstream multiplex tastes you'd have thought that the Fox Searchlights of the world, at least, would have taken notice by now.

But this is beside the point. Mickle's latest effort, the dark thriller Cold In July, releases in the UK tomorrow and there's a new trailer on the scene showcasing the grimy world inhabited by Michael C Hall, Sam Shepard and Don Johnson.

How can a split-second decision change your life? While investigating noises in his house one balmy Texas night in 1989, Richard Dane puts a bullet in the brain of low-life burglar Freddy Russell. Although he's hailed as a small-town hero, Dane soon finds himself fearing for his family's safety when Freddy's ex-con father, Ben, rolls into town, hell-bent on revenge.