Review: COLD IN JULY, Dank And Sweaty And Fabulous 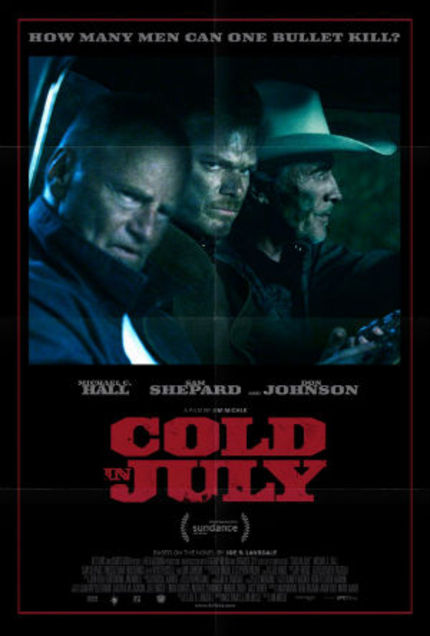 Stake Land and We Are What We Are director Jim Mickle exits his customary horror territory and heads for something altogether darker with grimy crime thriller Cold In July.

Adapted from the novel by Joe R Lansdale, Cold In July has been Mickle's end game for years now, a true passion project developed and honed while working on other projects with Mickle biding his time and waiting for the day he would finally have the chance to put it before cameras. That day has come and it was absolutely worth the wait.

We begin with a domestic nightmare, meek businessman and father Richard Dane (Michael C Hall) - a picture framer by trade - awoken in the middle of the night by the sound of an intruder in his house. Dane scrambles for a gun in the closet and makes his way, trembling, to the living room where a robbery is in progress. Panicked and shaking Dane's finger slips on the trigger and the intruder is killed. His wife is safe, his child as well, but Dane must cope with the emotional aftermath of being responsible for taking another life. Which would be quite a lot to cope with in itself but life gets much worse when the police tell Dane the dead man was well known to them - both for his own history and that of his father, a lifetime felon freshly released from prison. And dad (Sam Shepard) is not happy at all.

To go any farther into the plot of Cold In July would be to do a great disservice both to the film and to anyone who is not already familiar with the source material. Suffice to say that it is dark, grim stuff that remains firmly rooted in its all-too-real characters throughout while also adamantly refusing to stay within a predictable path. It is a film about family ties of the darkest sort, the bonds that we need to protect and the bonds that we absolutely cannot shake even when we would very, very much want to and the demands those bonds place upon us.

With the story set in 1989, Mickle has created here a film that does not merely feel like a period piece but like an artifact dropped on our laps from a different time. From the gritty cinematography to costuming, hair and the stellar - and heavily John Carpenter influenced - score, this is a film from another place.

Being unfamiliar with the source novel, I'm not even remotely in a position to say how closely the film version hews to the original material and what - if any - changes have been made, but the script, adapted by Mickle and his regular writing partner Nick Damici, feels entirely authentic. It is, no doubt, helped in this regard by the very strong cast.This would be the point where I say that of the three principal leads I find Michael C Hall to be the weakest - there's a certain deadness behind Hall's eyes that I find makes him very effective at playing eccentrics but creates distance when he's more of an everyman and when you're meant to feel empathy for him - but that is as much a factor of how very, very strong both Sam Shepard and Don Johnson are in their respective roles as of anything Hall has done himself.

In other words, 'weakest' does not necessarily equate to 'weak'. Shepard is a stoic cypher as the bereaved - and very dangerous father - while Johnson delivers an absolute barnstormer of a performance as flamboyant Houston private eye / pig farmer Jim Bob Luke. Johnson's been doing good work lately, yes, but mark me here: Johnson's chances of a major resurgence have never been higher than they are right now and his performance in Cold In July has far more to do with that than his work in Django Unchained.

Taking a chance by expanding his repertoire and moving away from the relative safety of the horror world, Mickle here moves from strength to strength. Once again, this is a remarkable bit of work from one of the brightest lights on the American indie scene.

Review originally published during the Sundance Film Festival in January 2014. The film opens in select U.S. theaters on Friday, May 23, and will also be available to watch via various Video On Demand platforms. Visit the official site for more information.