Fantaspoa 2014 Review: DEVIL IN MY RIDE, An Amusing Road/Buddy/Exorcism Movie 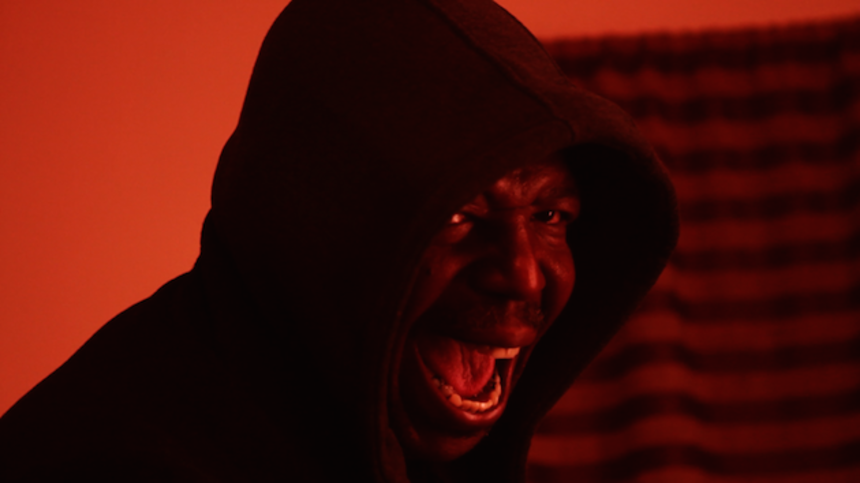 If The Battery approached the zombie movie with a very low budget but lots of fun and ingenuity, Devil in My Ride tries to do the same with the exorcism film.

Gary Michael Schultz's first feature-length effort centers on more than two male characters, but it ends being mostly a buddy movie in which the two protagonists are on a road trip to Las Vegas. A mixtures of genres is certainly what Devil in My Ride offers.

The movie kicks off with the presentation of Travis (Frank Zieger), an irreverent and carefree kind of character. Inside his beloved truck, the "Black Mama", Travis is having fun with some lady when he recalls a very important event he must attend: the wedding of his sister Doreen (Erin Breen). He has been fucking up his relationship with her sister for quite some time now, to the point that the broom Hank (Joey Bicicchi) doesn't even know him. What follows is Travis buying a gift for Doreen; it's a mysterious necklace that soon will make one hell of a wedding (pun intended).

Zieger carries much of the film's weight and the fact that he is a funny guy is indeed good news. Devil in My Ride will eventually be a little inconsistent, but Zieger's character is always there for a good laugh. Keep in mind this is low-budget filmmaking, so any supernatural element is not really spectacular, but rather just used to develop something closer to a character piece. When the bride Doreen is possessed by a demon, both Travis and Hank will have to remain together in order to save her.

As a matter of fact, Devil in My Ride is part of Fantaspoa's "Zombie Apocalypse" section. It's not really a zombie film, but the bride, once possessed, does bite. She's definitely a pain in the ass for the guys, though soon the narrative allows them to control the problem, making room for some other road-movie type of misadventures. Hell, the structure takes us to the classic "breakup" between the buddies, but before you start thinking this ain't your type of movie, let's just say there's an exorcist from Las Vegas called Johnny Priest.

In other words, cool bits are present throughout the movie and those include a nice soundtrack and a small Sid Haig performance, which is not entirely awesome but amusing nonetheless. Devil in My Ride is like that: it doesn't strike as an incredibly creative piece of guerrilla filmmaking, but it is for sure an entertaining trip to enjoy with a bunch of friends.

Devil in My Ride will screen again at Fantaspoa on Thursday, May 15. It is also available on VOD.

Do you feel this content is inappropriate or infringes upon your rights? Click here to report it, or see our DMCA policy.
Devil in My RideFantaspoaFantaspoa 2014Gary Michael Schultz