Cannes 2014 Review: THE INCIDENT (EL INCIDENTE) Is One Of The Most Intriguing Mexican Films Of The Year 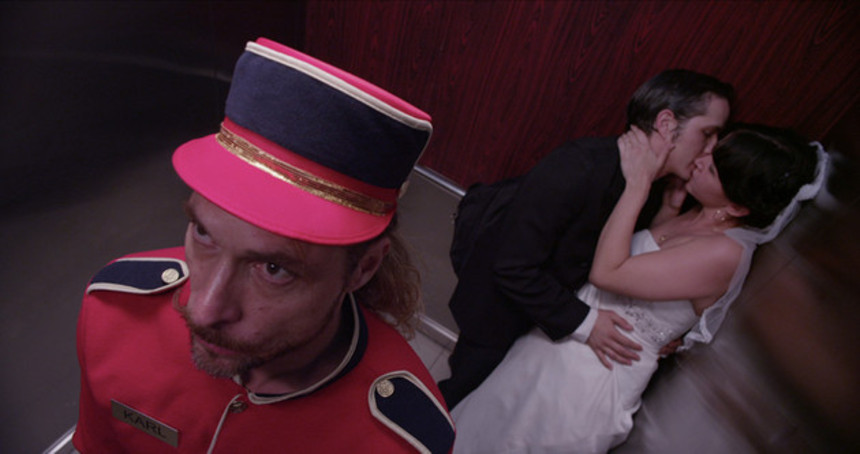 In what it feels like the scene with the most personal dialog during the first half of Isaac Ezban's The Incident (El Incidente), the agonizing character of Amores Perros' Humberto Busto shares his thoughts about life in general. "Life is a long highway and what we pass along never comes back", he says to his younger brother while also regretting the fact that he never enjoyed the different stages of his own life and always wanted to be somewhere else. It's easy to connect with this kind of thought as life works in mysterious ways and sometimes you can recognize and appreciate a certain moment until it's long gone. In The Incident, however, things work in an even weirder way and what the characters pass along will eventually return over and over again.

The movie opens with strange images and we get to see an old dying bride and also a just married young couple; all is set to classical orchestra music and it doesn't much sense, certainly, but when the narrative really begins we're in familiar territory... though only for some time. The Incident's first story deals with the aforementioned brothers (Busto and Las Lágrimas' Fernando Álvarez) and a detective (Raúl Méndez), who breaks into their house in order to arrest them. While Ezban's camera is always static, there's intensity attached to the introduction of these characters and it is pretty clear the acting is in good hands.

Ezban's first feature length film is a great display of how to make an intriguing film with not many elements. This first part in specific is proof of that, as it happens entirely in the staircase of a building, having only three actors interacting with each other. There's a solid concept behind everything, of course, but the filmmaking feels at times so simple (though it must have been quite tricky) that one must applaud Ezban and his crew for making an interesting and believable science fiction effort with few resources.

The main concept is that of repetition. The protagonists find themselves trapped in the staircase, where reaching the first floor means you are about to return to the last one. Not only that, if they drink a bottle of water or eat a snack, that object will appear again. There's a reason for the close-ups to these objects but before finding it, Ezban takes us to a road trip in the other story of his film. Changing the visual tone and bringing a completely different style, more colorful and a bit Quentin Tarantino-influenced (close-up to the actress' feet and a Johnny McCollum tune with a Johnny Cash feel included), The Incident introduces new characters (a family of four: the mother, her two kids and their stepdad), but the attentive viewer will soon recognize hints of the connection they have with the brothers and the detective.

The whole idea is to play with the concept as this second chapter is itself a repetition of what we saw previously, only with few differences like the setting (this time is a highway). Nailea Norvind's performance, as the mother, is particularly strong and vital to represent the desperation of the characters that want everything to be just a bad dream. It's worth noting that none of the film's performers (aside of Álvarez) get a whole lot of screen time and the reason is the nature of the film, as it covers a period of time of 70 years; elder actor Leonel Tinajero, for example, is also very important to the film.

One accepts to have characters in endless spaces, plus Ezban brings a dramatic element to each story (a character in real danger), but we are waiting to find out the why behind everything. We want to know more about the director's vision and, ultimately, it is both plain weird and lucid. Thanks to a detailed handmade production (using many objects like backpacks, cans and sandwich bags), The Incident has unique imagery and Ezban takes some time to create bizarre images and moments for the sheer pleasure of doing so. He also decides to explain everything, and that's always something risky to do in a science fiction piece.

Though it's never plain in terms of storytelling, it will be difficult to find each and every idea conceivable. Still, and as a whole, The Incident is bright and concise, perfectly expressing its director's (very human) concerns while also offering an exciting "alternate" world. Ezban is worried about aging and The Incident leaves a bleak feeling towards something as inevitable as that.

Do you feel this content is inappropriate or infringes upon your rights? Click here to report it, or see our DMCA policy.
Blood Window Midnight GalasCannesCannes 2014El IncidenteIsaac EzbanMexican CinemaThe Incident