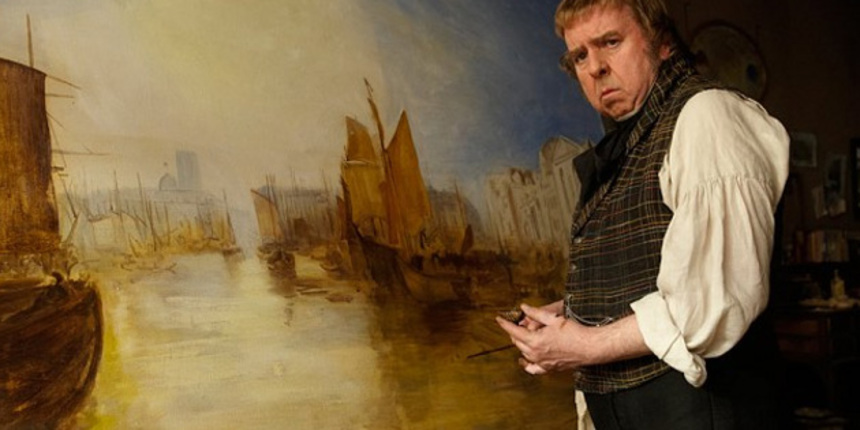 Mike Leigh's latest offering lustfully tackles the life, work and loves of Joseph Mallord William Turner, the legendary 19th Century British artist whose landscape paintings are revered around the world. It's a carefully constructed film, part performance piece and part biopic, that continues Leigh's tradition of providing rich and complex characters drawn upon the canvas of a greater tale.

For those versed in this period of art history, Turner was an iconoclast, a painter who often turned calamity (slave ships, burning parliament buildings, etc.) into ethereal images. Small details were often buried in his almost diaphanous imagery, usually with much of the canvas dedicated to the pitiless magnitude of nature; swirling clouds or the tempestuous waves of the sea dominate the human elements of his paintings.

If translated to cinematographic terms, Turner's usual gaze was a wide shot, providing an overview of a given setting, be it a rolling field or a churning ocean. One can see the scope of the event, even if details remain a bit obscured. The closer one gets, the less detail one sees, the opposite of what we expect. We are invited to seek out the details of the greater whole, but are foiled when we try to look too deeply at the visual image, as its details fade into obscurity the closer one gets.

Leigh takes these elements of Turner's art and adapts them into a wry story set during the later part of the artist's career. Mixing personal turmoil in the form of an estranged family, a shameful exploitation of a servant and the close relationship he developed with a woman who began as his landlord, the film sometimes leans towards the (soap) operatic.

Yet it's the occasional composition that hearkens to one of the master's paintings that provides the film its greatest strength. The opening shot is of a windmill and two Dutch women walking along a bank, the camera dollying until it fixes upon the silhouette of Turner gazing with a painter's intensity. While an overt reference to the likes of the inelegantly named "A Windmill on a Hill above an Extensive Landscape with Winding River" from 1794-5, the scene more importantly sets up the dichotomy between the artist and his art, between the creation of the sublime versus the pedestrian challenges of love, lust and betrayal.

Timothy Spall brings a compelling vulgarity to his performance. When painting, Spall spits on his canvas, using his own fluids to help shape the work. His hands drip with paint, his eloquent reaction to almost any query is a snorted grunt. It's an enjoyable show, to be sure, kind of over-the-top yet compelling at the same time. I fear I did think of Pacino's "hoo-ah" from  Scent of a Women, and at times this grunt became a kind of tick, even a crutch in lieu of more solid character development.

Still, this is a mild complaint from an otherwise extraordinary performance. Spall is perfectly excellent, the direction fairly solid, and the visuals put together exceptionally well by Leigh's long time collaborator Dick Pope. Yet for all that's going right for the film, there's still some elements that don't quite work. The relationships with the women are meant to be suitably complex, but they did at times veer into the maudlin. Similarly, disputes with fellow artists such as Haydon become almost comic-book like in their broadness.

The film lacks a certain "zip" that most of Leigh's films, even the morose family dramas, seem to be able to pull off. Yes, the pace of the 18th century art world was slower, but at times the film felt like it was lingering just a bit too long - some judicious editing would actually make not only a more accessible film, but also a more successful one.

However, I'm not sure anyone has any say over what Leigh gets to do these days, and I don't begrudge him that honour. Still, even legends become indulgent at times, and a tighter presentation would do wonders for the enjoyment of the film.

There are many that will fall for the almost impressionist take Leigh and his collaborators make about the life of Turner, and for them this will be another welcome addition to the pantheon of films this remarkable director has presented to his audience. For me, I must admit not feeling struck, feeling as ambivalent as I do about Turner's own paintings. I get their importance, I believe, in terms of what was to come, but have always found their dreary presentation that mixes the inconsequential with the overly dramatic to be a bit tiresome. Similarly, Leigh's film seems to be trying too hard at avoiding becoming just another biopic, only to have some pretty clunky elements come to the fore as the narrative progresses.

With fine performances and exceptional production elements, Mr. Turner will generate loads of supporters. Alas, I'm not one of them. It's not bad, by any means, but expect much gushing in the haze of a festival bubble that perhaps on sober second thought may be dialed back more than a bit.

I found that in the end this slow film veered to the ponderous, this refection upon art and the gift of its expression eventually becoming both predictable and dull. While a big fan of the director, I can't say I'm a big fan of this film (nor the artist it portrays), finding it a little hard to hold onto its varied elements. The scattered story seemed constantly at odds with providing either an accurate overview of the protagonist's life or a poetic examination of art and artists. It's as if we get neither wide-shot nor closeup of the artist, a kind of middle ground made by rapid zooming back-and-forth.

Even Spall's scowling (and likely to be discussed at awards time) performance can't entirely rescue the work. Mr. Turner isn't quite an aesthetic failure, yet neither is it an unabashed success the way many of Leigh's recent works have proven to be. Look too closely, and (like some of Turner's art itself) it tends towards the blurred, never quite providing the detail of a biopic, never quite as sublime or artistic as the paintings it evokes. It's an uncomfortable middle ground to be sure, and while delightfully ambitious, for me this blurriness isn't the result of some impressionistic success, it's simply a work that loses its focus.

Do you feel this content is inappropriate or infringes upon your rights? Click here to report it, or see our DMCA policy.
Mike LeighTimothy SpallPaul JessonDorothy AtkinsonMarion BaileyBiographyDramaHistory