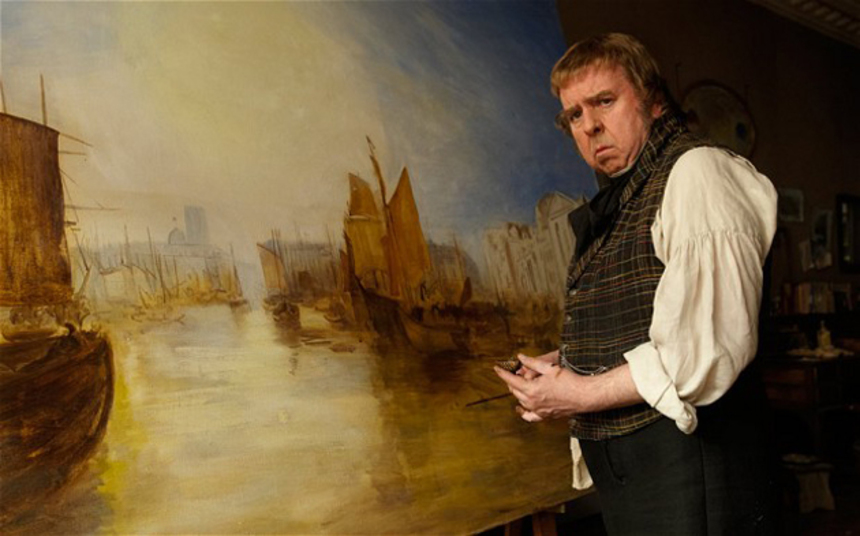 Mike Leigh's return to Cannes has created quite a stir. His new biopic Mr. Turner will debut at Cannes today - part of the Official Selection - and the first trailer is out to share with you.
EOne will release the film in its native UK on October 31st and Sony Classics will release it in the US on December 19th, right in the thick of the great Oscar push. The synopsis for the film is taken from the Cannes program.

'MR. TURNER' explores the last quarter century of the great if eccentric British painter J.M.W. Turner (1775-1851).
Profoundly affected by the death of his father, loved by a housekeeper he takes for granted and occasionally exploits sexually, he forms a close relationship with a seaside landlady with whom he eventually lives incognito in Chelsea, where he dies. Throughout this, he travels, paints, stays with the country aristocracy, visits brothels, is a popular if anarchic member of the Royal Academy of Arts, has himself strapped to the mast of a ship so that he can paint a snowstorm, and is both celebrated and reviled by the public and by royalty.

Though the film debuts to the general public today the press got to see the film this morning and are loving it. These are from the first four reviews I googled this morning.

THR - "Mr. Turner manages to illuminate that nexus between biography and art with elegant understatement."

Total Film - "It's a film comprised of astonishingly handsome images - Dick Pope's photography demands that old cliché of hanging frames on walls - and it mixes wicked humour with profound sorrow."

The Guardian - "Every scene in this film is expertly managed; every comic line and funny moment adroitly presented and every performance given with intelligence and love. It is another triumph for Mike Leigh and for Timothy Spall."

Do you feel this content is inappropriate or infringes upon your rights? Click here to report it, or see our DMCA policy.
Mike LeighTimothy SpallPaul JessonDorothy AtkinsonMarion BaileyBiographyDramaHistory