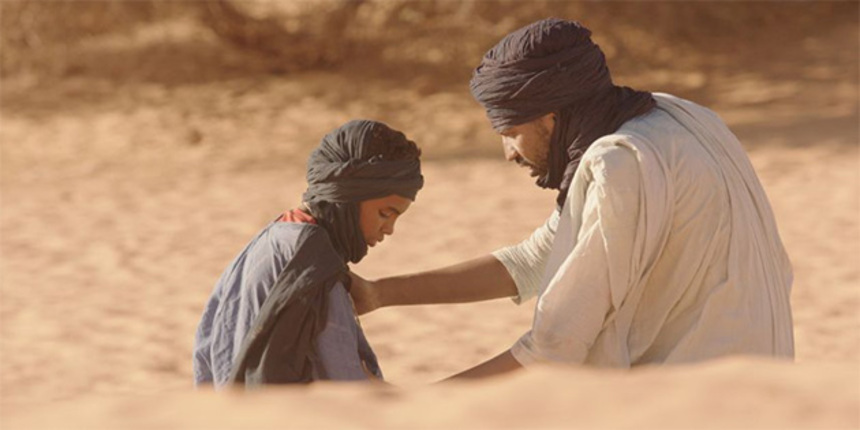 It's to the credit of Malian (by-way-of Mauritania) director Abderrahmane Sissako that he manages at time to make even the most horrifying of human behaviour still, in some ways, darkly funny. Timbuktu is a story as dessicated as the landscape it depicts, an interwoven story of an Arab infusion into Mali's rural muslim communities, bringing the zealotous and radicalized branch of Islam to a populace that chafes in various ways to these new restrictions. It is a tragedy, yes, but a very human one, with an overall caustic, almost nihilistic absurdity running throughout.

The very word for the location has for decades meant isolation and foreignness, a place as remote as to be almost otherworldly. With rocket-shaped mud structures and a sand-blown dreariness, the landscape of Timbuktu almost feels like the film takes place in the desolation of Mars. Yet in the smiles and tear-filled eyes of the people, in the passions they demonstrate and the humanity the bring to the screen, the travails of the people of this fictionalized Timbuktu are made to feel much closer than many are likely to feel comfortable with.

With a megaphone a man on a motorcycle admonishes the community to follow the new edits, for women to wear socks and gloves at all times, to give up music and cigarettes in order to achieve a greater purity. On its surface, this is the kind of string-pulling "badguy" stuff that films from this region tend to tell, but the beauty of Timbuktu lies in how it's able to broaden and contextualize the reactions to these actions, even showcasing both the hypocrisy and even at times regret from those following the stern orders delivered from radical organizations a continent away.

Mali musical culture is internationally renowned, and some of the film's most emotionally harrowing moments involve the censoring of musical expression. A whipping scene rivaling that in 12 Years A Slave is particularly stunning, especially when it modestly avoids showing the physical rending of flesh in favour of a beautifully defiant reaction to the corporal punishment.

Shot with a dreamy style that captures the beautifully expressive faces of the cast, Sissako weaves multiple storylines without ever bogging things down or getting lost along the way.

Yet it's the script by Diane English (mostly known for TV work), drawn from the novel by Paul Auster, that provides the film its delicate balance between melancholia, shock, and romanticism of the situation.

A particularly eloquent Imam challenge the interpretation of sharia being doled out by those now in charge while still coming across as appropriately devout about the core beliefs at the heart of the system. There's rarely such sophisticated portrayal of this kind of moral subtlety in films about Muslim communities, and Sissako manages to thread this needle in a very effective way.

There's a few visual tricks, including a shot of sand and tree forming a kind of pubis, that are sure to make those looking to slide around the dunes of the film looking for hermeneutic or Freudian import very happy.

Timbuktu is not for everyone - I did hear quite a few snores scattered throughout the screening room. It's pace is deliberate, yet it rarely felt indulgent or overlong. It's a film that likely deserves a bit of tightening up, but for those who welcome to such experiences I believe you'll find it a rewarding one.

Do you feel this content is inappropriate or infringes upon your rights? Click here to report it, or see our DMCA policy.
Abderrahmane SissakoCannes 2014diane englishtimbuktu