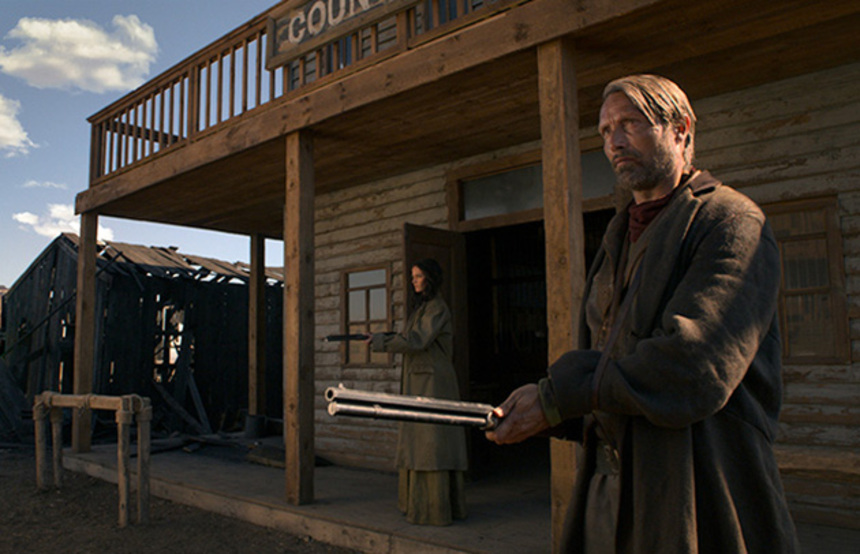 It's no longer really much of a bold move to call Mads Mikkelsen one of the finest actors working in the world today. A consummate thespian, his performances are always intoxicating to watch, be they in silly pulp-populism when playing Bond's nemesis in Casino Royale, to his devastating turn in the Oscar-nominated, Thomas Vinterberg directed film The Hunt.

Mads got his start with his Scorsese to his DeNiro, Nicholas Winding Refn, with their 1996 collaboration in the first Pusher film. In many ways the two are children of the Dogme '95 movement that swept Danish cinema into international focus during that period, the enfants des enfants terribles as it were. In Refn's case, this fact was quite literal, with his father being a noted editor for many of the key films during this period.

One of those originators of the original Dogme document was Kristian Levring, an extremely talented filmmaker who along with Von Trier, Vinterberg spurred this notion of a "cleansing" of cinematic conventions, a back-to-the-roots movement that both simplified and provided what in another film Von Trier would refer to as "obstructions".

Levring's The King Is Alive is listed as "Dogme #4", and is easily one of the best films under this rubric. A mix of a Condradian tribal tale set in the African wilderness combined with the language and drama of Shakespeare, it's a rare piece of cinema, and while slightly overshadowed by others of that period the film demands to be seen.

I thus had pretty big expectations when Mikkelsen would join forces with another master from that Dogme period following The Hunt, and also anxious to see what they'd do with a film crafted as a Western. Would it try to be too clever and arty, a dry and clumsy take on what some believe is a tired genre? Would the chemistry between director and actor be traded for some sort of laconic boredom feigning for poeticism?

My fears were completely unfounded.

For if The Salvation is not a perfect film, it's pretty damn close to being one.

Told with a raw, wry determination, the writers Anders Thomas Jensen (another from the Dogme mix) and Levring have provided a showcase custom made for Mikkelsen, mixing the likes of Eastwood and Wayne into a new kind of archetype. Mads' expressive face, micro twitches of his eyes providing the subtlest of clues of the gears grinding away beneath the surface.

The story is at its core a revenge film, and crafts one just as compellingly as Eastwood's own deconstruction of the Western myth in Unforgiven. To Levring's credit he pays tribute to the past while very much making the film its own thing, never falling prey to parody or homage. There's bouts of brutality and even some elements that lean towards the pulp end of the genre, but the film never falls prey to the easy way out.

There's horseplay, gun battles, and people walking around in dusty, wind-beaten towns. There's also, however, an unflinching nature to the work, the violence integrated into the narrative, an undercurrent of real loss and betrayal at both the internal workings of the community and the greater crimes that are taking place outside the borders of this town. Everything from the genocide of native Americans to the venality of Oil prospectors is thrown into the mix, and it all adds colour to the story rather than feeling tacked on or expositional.

While the film shares very little in common save for at time a similar feel, I joked immediately after the screening that this could serve as a spiritual prequel to There Will Be Blood. A few days later and I'd be tickled to see these two films screened back-to-back, showing two very different ways at toying with genre tropes to excellent effect.

Mikkelsen isn't the only performer that brings his "A" game, and perhaps the most interesting choice is casting Eva Green as a mute character. Her fiery eyes do all her talking, and they prove to be quite loquacious as they burn with rage and intent.

Jonathan Pryce is a treasure, and it's nice to see him get to trot out his pitch-perfect American drawl at the town sheriff/undertaker. Jeffery Dean Morgan has his share of credits, to be fair, but here he positively chews scenes in a viscerally pleasurable way as Delarue, a looming American foil to Mikkelsen's more introspective hero.

Shot in South Africa, there's an otherwordliness to the landscape, not dissimilar to how Leone's Spain made for a slightly angular take on the John Ford-like vistas that he pioneered shooting in Utah and New Mexico. With a haunting soundscape and a dessicated air, the film's torpid locales bristle with the undercurrents of rage and betrayal.

It's indeed pleasurable when genre films are able to be both original and respectful from where they came, honouring the past while still very much feeling contemporary. Never dialing up the violence to a gratuitous level, the film remains unapologetic about the negative consequences of certain actions, sparing the audience no pain when called to do so.

The Salvation is both a hell of a lot of fun and consistently intellectually and emotionally rewarding to its audience. It's a masterclass on how to combine the visceral with the subtle, all while allowing for moments of great stillness or hyperbolic bombast. It's a delight to witness the elegant shifts in tone executed without stumble, shaping the arc of each character in ways that make it paradoxically seem organic and haphazard while at the same time being cathartic and warmly familiar.

Kudos to Levring and co. for this terrific piece, a gobsmackingly enjoyable time at the cinema that also happens to be one of the best films I've seen this year.

Do you feel this content is inappropriate or infringes upon your rights? Click here to report it, or see our DMCA policy.
Kristian LevringAnders Thomas JensenMads MikkelsenEva GreenJeffrey Dean MorganEric CantonaDramaWestern