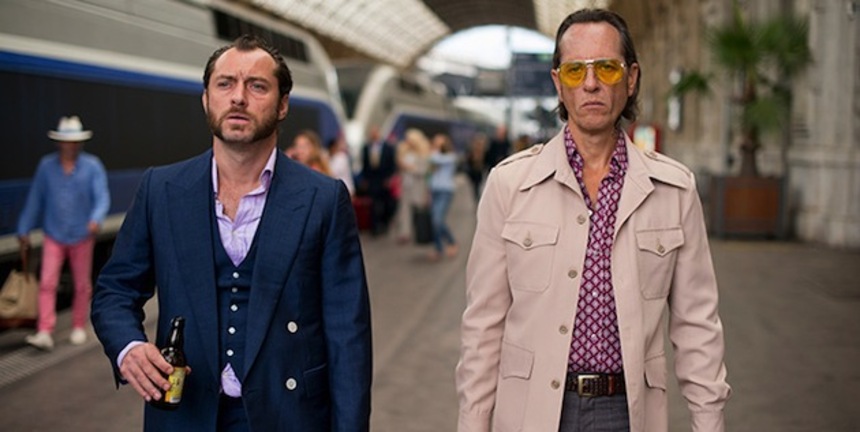 Petty gangster, safecracker, loud mouth, loose cannon, thief, deadbeat dad, pint guzzling, word-smithing, cat killing, thug Dom Hemingway is the type of guy you would have no tolerance for in real life, but generally gravitate towards on screen.

Twelve years is a long time, but Dom did his time in silence to protect his betters, and after being set free of Her Majesty's Pleasure (I'm assuming not for good behavior) attempts to pick up the pieces of his life. While on the inside, his wife died of cancer, his daughter grew up and had kids, his boss got very, very rich, and his only friend in the world, Dickie -- a snappily attired Richard E. Grant, with his glorious hangdog face, shooting glasses, and shrugged shoulders -- remains loyal.

He is not out of the joint for 24 hours before he's had group sex with high class hookers, violated the non-smoking law in the local pub, filled his nostrils with coke on top of the smoke, and beat the living hell out of the man who married (and buried) his wife while he was on the inside. All of this pent up rage and sexual bluster is, of course, Dom's way of not processing the guilt of missing out on his daughter's (and grandson's) life.

Like Eric Bana in Chopper, or Tom Hardy in Bronson, Jude Law gets to look really ugly with facial scars and yellowed, gold-capped teeth. He gets to act really crazy, and burn up the screen with monologues about the majesty of his mighty cock, even thought writer / director Richard Shepard's film is more of an amuse-bouche than anything else, however. It aspires to dig into the psychology of a larger than life character, while indulging in all those larger than life aspects as Dom attempts to get his life of crime back on track.

It breaks things up into ironically titled chapters to facilitate this. I confess, I am a sucker for films in which characters manage a micro-moment of communication by a silent but loaded wave of the hand, and this movie has that at one point. But there are also shenanigans. Pithy, violent, frankly ridiculous shenanigans that put Dom Hemingway strictly in movie fantasy territory. Not that there is anything wrong with that, it's just that the movie never quite manages to have its cake and eat it, too.

Dom and Dickie take the train to France to visit their boss (Demian Bichir, who is everywhere these days) to collect the money for Dom's silence all those years. Wall to floor pictures of very serious, possibly angry, looking monkeys dominate the main room of the sprawling villa where Yvon Anatoli has apparently retired. No, don't compare this film to Sexy Beast; that would be utterly wrong on so many levels. Dom, with Dickie behind him like a forgotten conscience, storms in looking for 'a present.' He spots Anatoli's sexy wife (model Madalina Ghenea, playing the femme fatale). Things go a little bit Withnail & I -- oh Grant, we've missed you! -- at the villa before going off the rails.

Dom is his own worst enemy, proving time and time again to be capable of fucking up a good thing with his braggadocio and insecurity. Back in London, he tries to pick up his safe cracking career with the next generation of criminals (and lock-box technology) in another wacky vignette. You can see the cycle here, I think he can too, but what the hell, it's hard to give up being the life of the party.

The crime parts of the movie are shot baroque and fantastical, lit with harsh red and yellow lights, featuring flamboyant wordplay and violence. The daughter parts of the film are shot down to earth and real in run down council estates and rainy London sidewalks. Emilia Clarke takes off her CGI dragons from HBO's Game of Thrones and trades in her blonde tresses for a cropped red frump to play the struggling mom who sings at the local bar, and is happily married to a Senegalese musician who appears, at least in the single scene he is given, to be the good dad that Dom is not.

The film gives Dom many chances. Will he fuck this one up or will he not? Jude Law gets to be over the top, and occasionally emote a bit, too. The consequences are mainly fantasy, but it's hard to not love this kind of movie character. OK, it is easy middlebrow artiness, but it mostly works if you don't expect too much of it.

Review originally published during the Toronto International Film Festival in September 2013. Via Fox Searchlight, the film opens in select theaters in the U.S. today (Wednesday, April 2). Visit the official site for more information.