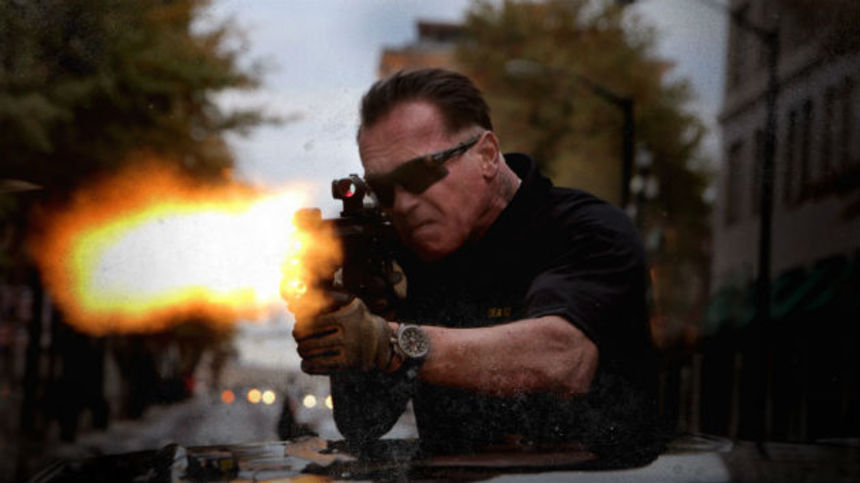 What's easy to forget about Arnold Schwarzenegger is that he excels in roles that maximize his strengths.

His range may be limited, but make him the unquestioned leader of a hard-bitten team of DEA undercover operatives, give him a script filled with narrative intrigue and crackerjack dialogue, surround him with a seasoned cast doing unexpected things, and put him under the direction of the increasingly skillful director David Ayer, and the result is Sabotage, a genuinely gripping and suspenseful action-thriller.

Ayer is the key. Like James Cameron, John McTiernan, and Paul Verhoeven before him, Ayer starts with a script, credited to himself and Skip Woods, that makes the most of Schwarzenegger's physical presence. His character here is John Wharton, aka Breach, whose tight-knit team spits out corrosive wisecracks that provide lubrication for the dangerous mechanics of their job, fighting the drug war against lethal enemy combatants who never show any mercy. They, too, are merciless, yet they're also fiercely protective of one another. Their first mission depicted on screen, however, spins them into corrupt territory that forever taints them, providing fuel for everything that follows.

The team, hopped up on adrenaline, alcohol, anger, and tamped-down fear, appears to thrive on danger, but it becomes apparent that the long-term effects of their work eats away at each one of them, manifested by behavior that becomes increasingly haywire. As a writer, Ayer has a nearly unerring ability to capture how those type of pressures change the men and women of law enforcement, in ways that the characters themselves either cannot perceive or refuse to acknowledge. (See, for example, Training Day and Dark Blue.) He also has a keen sense of the intimate bonds that uber-macho men and women form through teamwork (e.g. U-571 and The Fast and the Furious, both as credited co-writer). 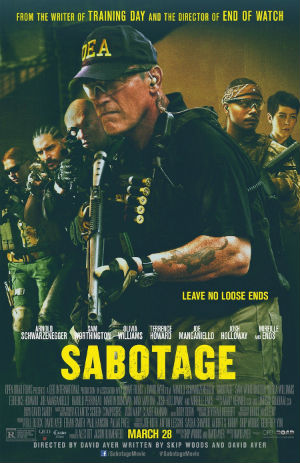 In his own work as a director, Ayer has fleshed out these themes by focusing on the officers in blue, painting them with varying shades of grey and a strong sense of visual style in Harsh Times, Street Kings, and the superb End of Watch. In Sabotage, he displays trust in the ability of audiences to follow a story that is not always spelled out slowly, as well as confidence in his own skills as a filmmaker, allowing the motivation of the characters to emerge at the precise moment they are needed most, without ever feeling schematic in the least.

Olivia Williams supplies a welcome counterpoint as a dogged homicide detective; she doesn't have the field experience of the DEA team, but she is their equal in her pursuit of answers, and trades profane banter with her partner (Harold Perrineau) as well as anyone. The DEA team, including Joe Manganiello, Sam Worthington, Terrence Howard, and the exceptional Mireille Enos, etch their characters with the persuasive attitude of hardened war veterans.

Sabotage falters at a certain point, possibly succumbing to a temptation to portray Schwarzenegger in a more familiar iconic manner. It's only one sequence, though, and easy enough to ignore in view of the bloody, crunching, explicitly violent world in which the film exists.

The story hints at the larger story behind all these events -- the true cost and value of the drug war -- without belaboring the point. Sabotage doesn't pretend to tell the whole truth and nothing but the truth, yet it feels absolutely authentic as it delivers one jolt after another.

The film opens wide in theaters across the U.S. on Friday, March 28. It opens in Canada on Friday, April 11.