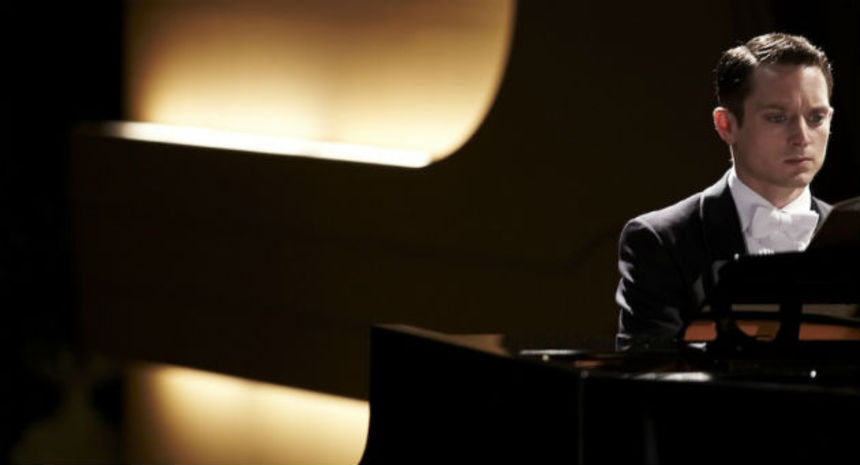 Make no mistake, the premise of Grand Piano is 100 percent ridiculous.

Do you remember Phone Booth, where Colin Farrell couldn't hang up or he'd be killed by a sniper? It's like that, only it's concert pianist Elijah Wood who has to keep playing or risk being shot. "Now you know the true meaning of stage fright!" is something that the villain really says to him. There's also an element of the plot that's not entirely dissimilar to the Bugs Bunny gag where Yosemite Sam has rigged a certain key on the piano to explode when Bugs plays it.

So yes, it's complete nonsense. The bad guy's plan, the mechanics of the plot, the pianist's ability to multitask while performing -- ludicrous, all of it. Now here's why it works: because of director Eugenio Mira's total commitment. With a game lead actor and no shortage of ingenuity, Mira applies his considerable artistic talent to this stack of baloney as if it were a brilliantly crafted and fully plausible thriller. He sells it, we buy it, everybody goes home happy.

Wood plays Tom Selznick, once the most promising pianist of his generation, now a man who five years ago had a spectacular mid-performance flameout and retired from the arts. On the day the film is set, he's taking the stage again (with an orchestra backing him up) to play a few pieces in honor of his recently deceased mentor. He's nervous he'll choke again, and the whispers among his former colleagues don't do anything to relieve the anxiety.

At the concert hall, Tom's wife (Kerry Bishe), a superstar actress, watches from the box seats, beaming with pride. A pair of her tacky, coattail-riding wannabe friends (Allen Leech and Tamsin Egerton) have floor seats, from which they seethe with jealousy. We also meet a conscientious stagehand (Alex Winter). We're confident that all these non-Elijah Wood characters have been introduced because they will be significant later. 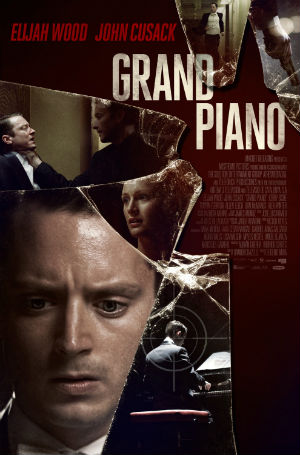 Shortly after the performance begins, with Tom seated at the one-of-a-kind grand piano his mentor built, playing again as if he never left the stage, he turns the page in his score to find some words written in the margins. The gist of the message: a sniper will shoot Tom and his wife if he stops playing before the concert is over. An earpiece is conveyed to him during a break; now the villain (the soothing voice of John Cusack) can instruct and taunt him more directly. Tom, a consummate professional, is able to have panicked conversations with the bad guy while playing complicated musical pieces, often without looking at his music or the keyboard. You will be delighted by some of the other things that Tom is able to do while playing the piano and fearing for his life.

And there you have it. The core concept and structure are similar to last year's Ethan Hawke flop Getaway, right down to the anonymous menacing voice giving instructions to the unwilling participant. But that movie, despite having a premise no stupider than Grand Piano's was terrible, and Grand Piano is good. So what's the difference? Execution.

I don't know what Elijah Wood's actual skill level is on the piano, but the way he fakes it here is nothing short of remarkable, and it speaks to his and Mira's commitment to taking the whole thing seriously. It would have been infinitely easier to avoid showing Wood's hands as much as possible, to focus on chest-level shots where we see his arms moving but not which specific keys he's hitting. Instead, Mira gives us long, unbroken takes of Wood banging away on the keyboard, our view of his hands unobstructed so we can see that what he's playing really could be the music we're hearing. The hand-synching, if that's what you call it -- sure, let's call it hand-synching -- is nearly flawless.

Moreover, Mira and cinematographer Unax Mendia are constantly pulling off carefully orchestrated shots and marvelous feats of camera movement, applying the same type of sweeping, operatic bravura that Brian De Palma applies to everything he does. (I thought of Snake Eyes in particular.) There's something thrilling about seeing such technical precision used in the service of such lunacy. While the screenplay (by Damien Chazelle) is overly expository and larded with repeated dialogue, everything else about the film has energy and confidence and is perfectly capable of carrying you away if you'll go along with its fantastically goofy premise.

Review originally published during Fantastic Fest in September 2013; The film is now available to watch via various Video On Demand Platforms, and will open in select U.S. theaters on Friday, March 7. Visit the official site for more information.