Interview: Larry Fassenden Spills His Guts on BENEATH, His Love For Horror, And A Little Bit Of ABCs OF DEATH 2 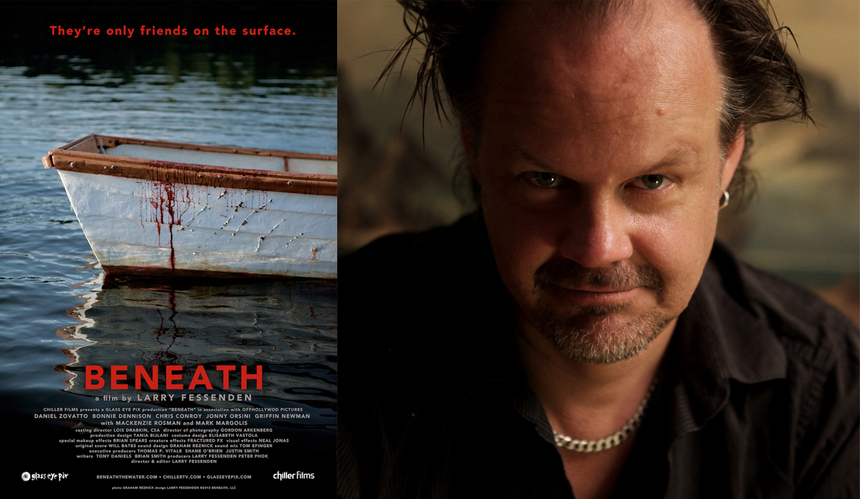 Interviewing Larry Fassenden was a real treat. When Hollywood is plaguing the horror genre with remakes, 15 unwanted sequels and anything to make a quick 60 million bucks, this guy has been in front of and behind the camera in numerous independent projects, helping to keep the original idea alive. He's also made some time to act alongside Bill Murray and get a credit in a Martin Scorsese movie.

I caught up with Fassenden to talk about his latest directing outing, Beneath, about a bunch of punk ass teens up shit creek without paddles. But that's the least of their problems -- there's a giant fish with razor sharp teeth and an appetite for 12 swimming around them just aching for one (or all) of them to fall in the water.

He also spills his guts on his love for all things horror, and gives us a little taste of what to expect for his segment in the upcoming ABCs of Death 2.

***SPOILER ALERT -- we talk about one of the (very small and quick) deaths in the film in question two. If you don't want to know who, just skipover that one.

Congratulations on a monstrous feature! I'm terrified to go in the ocean thanks to Spielberg, and now I'm terrified to go in to a lake thanks to you. So the first thing I want to applaud you for and discuss is the use of practical effects and prosthetics. What was the process of determining how much practical effects you could use before needing CGI?

From the get go I pitched a practical puppet for the monster to Chiller, who financed the film. They were nervous at first, I guess it seemed retro, but I wanted something alternative to the SiFy Channel TV movie vibe. It's not that I hate CGI, but it's actually very expensive to do well, and from an aesthetic point of view, I wanted this movie to have a throw-back approach. We did use CGI to enhance the practical effect, remove rigging and bring the eye to life.

You killed the little girl on 7TH HEAVEN! Let's talk about the casting - since we spend a lot of time with them on the boat, what about each made you feel like they had great chemistry together?

Thanks for asking about the cast. I am very proud of the performances. The roles are pretty clichéd: the jock, the film nerd, the slut etc, but I wanted to find some dimension to the characters and humanize them. Chiller wanted name actors at first, but we quickly found that famous young up and comers didn't want to act in a TV movie about a giant fish for a modest salary, and that opened up the field for me to audition genuine local talent. It was one of my favorite parts of the whole creative process. Myself and my co-producer Peter Phok worked with our casting director Lois Drabkin and we were really able to find an alchemy with the actors by playing them off each other over a couple weeks of auditioning.

I had loved Bonnie Denison in our previous film Stake Land, and she came in to audition for the role of Debbie that eventually went to Mackenzie (the little girl from 7th Heaven). I really liked Bonnie's intelligence and I felt she could give nuance to the role of Kitty, who might otherwise come off as an unlikeable slut. Mackenzie had the perfect impish charm for the role of Deb, she was the one L.A. cast member we were able to fly in. All of the fellas brought a real distinction to their roles, and the casting even influenced the script. As written, the two brothers were both thick headed jocks, but it became more interesting for Jonny Orsini to play the younger brother Simon as more of a resentful and cunning type, as a sort of Iago to his more naive lug-headed brother. Once we were cast up, the actors bonded during long hours stuck in the rowboat waiting on the film crew. They developed a familiarity with each other which lead to improvs and the spontaneity that made them feel like genuine frenemies.

I saw a lot of JAWS 2 (teens banding together to survive the horror in the water) and 3(this time it's personal!)  influences in BENEATH. What directors or films influenced you when creating the monster and the story?

The Jaws franchise is truly one of the lamest in history, most likely because the first film was so special. I have been influenced by Jaws in every way but thoroughly rejected the subsequent films except for one death scene in Jaws 2 when the kid is rammed into the boat while his girlfriend screams. The movies I thought about when approaching Beneath were Hitchcock's Lifeboat because of its single location, and Lord of the Flies, which was about kids turning on each other. I've been making movies long enough that I have developed my own approach to the process, so I don't think of an individual project as having direct influences. All my work is informed by my love of Hitchcock, Polanski and Scorsese. With Beneath I was also drawing on my personal history growing up with boats, and my very real frustration with the hubris and stupidity of american politics and our culture of narcissism. Finally, I wanted to create a tone with a heightened sense of reality to place the film in the realm of allegory, by stylizing the shooting style and sound design and music.

You seems to have an affinity for scared and horror - what about this genre appeals to you so much?

Fear is the great motivator in human affairs. To explore fear is to examine human nature. All the monsters and ghosts in our stories are a means to talk about the way we interact with the unknowable, the way we deal with death and loss, the way we interact with each other in a crisis, and the limits of our morality -- all the big questions. At the same time, the genre invites creativity from the artist and the audience because it engages the imagination with metaphor -- images and creations that don't exist but speak to us. People who respond to the aesthetics of horror don't control the choice. They are wired that way.

Since this is going on ScreenAnarchy and you love the site, what can you tell us about your letter in ABCs of Death 2? Any exclusive you can share?

I do love ScreenAnarchy and its reverence for cinema. As for ABCs, I don't know what I'm allowed to divulge... suffice it to say my episode will have familiar Fessenden themes: the juxtaposition between horrors real and imagined.

Beneath releases today on Blu-ray and DVD. Head over to Shout! Factory or Amazon and pick up your copy.