Rotterdam 2014 Review: SORROW AND JOY Could Not Be More Aptly Named 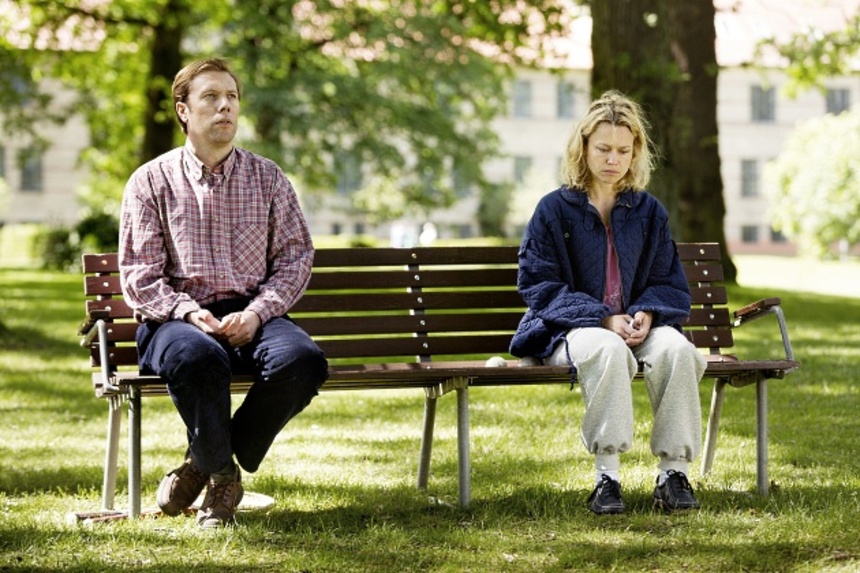 (Ever loved something you expected to hate? THIS FILM!)

This year, the International Film Festival Rotterdam dedicated a whole section of its "Signals" program to Danish director Nils Malmros. As I was not really aware of his work, this event would normally have passed me by entirely. But his newest film Sorg og Glæde aka. Sorrow and Joy suddenly stormed the festival chart, being praised by critics and the paying public alike. The audiences even awarded it a whopping 4.5 out of 5 as its average rating, securing this film the fifth place in the polls.

I decided to check Sorrow and Joy out and was pleasantly blown away by it, this being one of the best films I've ever seen at the IFFR. So what's it about? Read on!

Filmmaker Johannes is married to Signe, and they have a baby daughter. But one afternoon Signe kills the infant during a psychotic panic attack, a known affliction she was being treated for. When Johannes comes home she has already been arrested by the police, and is kept sedated in a state asylum for criminals. Shocked and grief-stricken, Johannes tries to convince the authorities that his wife needs treatment rather than punishment, and that the death of their daughter is an accident, rather than manslaughter or criminal neglect. While the authorities are sympathetic, his case seems hopeless.

But Signe was a schoolteacher, and a surprising thing happens: the parents of her pupils sign a deposition that they don't hold her responsible for the death, and that they want her back at school as a teacher. It is a document which may allow Johannes to make the state authorities rethink their stance. Just as important, it allows Johannes to consider a future in which he and Signe can forgive each other for what happened.

The death of one of your children is a terrible thing, and even the threat of it can bring me to my knees. In the past years I noticed several times (*cough* Grace *cough*) that this particular subject in cinema granted me no opportunity for joy, no matter how beautifully treated. It's why I skipped Siddarth, coward that I am, once I found out about its subject matter. Such an event is too strong for me to be used as a mere story-beat in a movie, and tends to screw me up for most of what follows, leaving me an angry mess.

Notable exceptions to this are Tsukamoto Shinya's Kotoko, Jeff Barnaby's Rhymes For Young Ghouls, and now Nils Malmros' Sorrow and Joy. And especially the latter impresses me with its handling of its subject. At no time does the film sensationalize or sentimentalize what happened, but neither does it trivialize it. And instead of making it seem like he's walking a tightrope, Nils Malmros keeps the story so assured and grounded, and pleasant to watch, that I couldn't help but be soothed. Sorrow and Joy isn't a film out to shock you, or twist its story with a sudden revelation. This is a film in which people calmly debate things, and strive to listen, to understand each other's opinion.

This becomes most obvious when the conversations begin between Johannes and Birkemose, the forensic psychiatrist working for the government, both discussing what to do with Signe. In the run-up to this point in the story, it seems Birkemose will be the villain, a goose-stepping civil servant who is the greatest hurdle to overcome. When we finally meet the man he turns out to be very knowledgeable and sympathetic, and played by Nicolas Bro. And we (the audience) almost breathe a sigh of relief. The discussion itself is intelligent and enlightening, two humans trying to work together towards the best possible solution.

This thorough lack of evil people does not hurt the story in any way, or take away from its intensity or tension. Can anyone, so directly involved in the accidental death of a child, ever allow him/herself to find forgiveness and happiness again? Nils Malmros doesn't want viewers to wallow in despair, and indeed never shows the baby's death. He even manages to inject his story with lots of decency and humor, yet he never quite allows us to forget the tragedy that happened.

Of course the whole movie would collapse into a big, soggy mess if the performances were sub-par, so thankfully they aren't. Helle Fagralid as Signe and especially Jakob Cedergren as Johannes are absolutely fantastic, and so is Nicolas Bro, although by now, I have stopped expecting any less from him.

I'd love to write about details, particularly to show why this film does it right, where in general films do it wrong. But I would be spoiling things better left to discover for other viewers. Did this film mess me up? I cried twice during the showing, and once more on the way home, when a certain song played on the radio while I was thinking about the film. Even the next day, I choked up while telling someone how great it was. But for once, I do not mind being so strongly affected. Because Nils Malmros provides joy on top of sorrow.

More about Sorrow and Joy