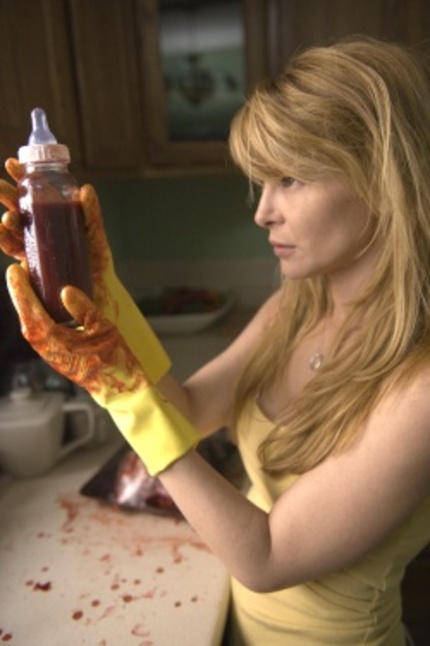 Why oh why the hell did I go see Paul Solet's baby-horror thriller"Grace"? I must have been the worst possible audience for it!

Thing is, from the moment I saw this film scheduled in the Imagine Festival Amsterdam programme I wanted to know how it ended. I wanted to know the whole plot, exactly how horrifying it was, how funny, how respectful, how DIS-respectful, if a point was being made, or if it was solely for entertainment's sake...

Basically what I wanted was for someone ELSE to go watch the movie and then tell me all about it. Alas, I couldn't find anyone so I had to go myself. Them's the breaks...

Why was I such a bad audience for this? Well...

I can deal with most kinds of horror easily, and gleefully watch people stare in astonishment at some of the titles in my DVD-collection. Yet there are some weak spots in my armor, some raw open nerves so to speak. Certain kinds of violence against women (or rather, how that is handled in films) get me enraged in ways that take all the fun out of watching such a movie. Violence against babies double so (that Steven Seagal trailer joke was totally lost on me).
And pregnancy horror too has always been a sore spot with me. Lately this distaste has grown FAR worse for reasons I'll explain later, but I've always thought it was too easy a target, a button that was too obvious to push.

But Paul Solet ain't pushing that button. With "Grace", he's punching it.

Madeline is 8 months pregnant when disaster strikes: a car accident kills her husband and leaves her wounded, with the baby pronounced dead at the hospital. Carrying the "dead" baby to term, a few weeks later Madeline delivers a beautiful girl who to the astonishment of everyone present starts to move and seems healthy. Naming her "Grace", Madeline staunchly refuses to have the baby researched and takes her home. But soon the baby starts to smell bad and flies gather above her cradle. Worse, Grace regurgitates all food and seems to deteriorate. When Madeline's blood (from a bit nipple) mingles with the milk however, Grace lives up again.

Unwilling to lose her daughter to endless medical research, an increasingly weakened and stressed Madeline tries to accumulate enough blood for Grace to survive. However, unknown to her, enemies are gathering to have Grace removed from her. First amongst these is Madeline's maniacal mother-in-law, who refuses to leave the last living memory of her son in the hands of a woman she deems unfit for raising a child...

The story in "Grace" as told above can be exploited into several different directions. I'll list a few of the more obvious examples here:

In itself, Madeline hunting for humans to provide blood for Grace could have made for a new take on "Hellraiser", slowly building the baby into a right proper demon or monster. This would have been the "fun horror" direction.

Then again, the setup contains so much misery for poor Madeline that you could easily build this into a serious drama. The baby does not need to be a weird supernatural creature to tap the wells of grief, sorrow and utter horror of having your husband die just when you are about to give birth. The same goes for having to walk around with a dead child in you for weeks, or having to raise your baby all by yourself and seeing him/her get more and more sick for inexplicable reasons. This would have been the regular "serious drama" direction.

And say the baby never came alive after birth and Madeline has imagined it all, driven mad by her plight? This would have been the "nasty mind-fuck" direction.

Jordan Ladd (of "Cabin Fever", "Club Dread" and "Hostel: part II" fame) plays Madeline and I can't think of a more harrowing role to play for her. To see this strong-willed woman slowly being ground down to bits by what happens to her is exasperating, the more so because the script unfairly stacks the odds in her disfavor.
And Gabrielle Rose has a field day playing the mother-in-law, who is so utterly convinced of herself being right that she becomes the most dangerous sort of person.

Yet where this movie badly stumbles is in its choice of what to depict and how to do that. Scenes like Grace's birth or the car accident are immaculately shot and fully effective. The first half hour or so marks Paul Solet as a major talent to keep track off.

But later on, several embellishments reek of sensationalism and feel very much out of place. For example: when Grace gets a bath and starts to bleed from a skin rash, this turns the bath water bright red. It's a cheap effect and in very bad taste. Seeing Madeline dress the rash later shows that it is in no proportion whatsoever to what you just witnessed. In contrast, other parts like the vomiting or the flies are very well done, being startling and creepy.

In all fairness I should add here that I may be a bit oversensitive to this subject. When this film showed at the Brussels Festival with the director present, he warned the audience that all pregnant couples and recent parents should leave, as this film would be too strong for them. While this sounds like a William H. Castle-like boast, Solet was probably right as his movie butchered me. Allow me to explain.

My second son was born last spring, and my wife and I had a difficult time getting there. Echoes showed possible deficiencies. Weeks before being due, the baby (who had been very active previously) went totally still, a bad sign if there ever is one. We rushed from midwife to doctor to hospital, and all the time the baby was not moving. It was decided to rush the birth, but at night the sensors suddenly showed things going from bad to worse and an emergency cesarean section was necessary. When the baby was removed we were totally convinced it was dead or paralyzed. Three minutes later and someone in the team of doctors taking care of the baby loudly said: "Relax everyone, the little guy is getting there, he's just taking his time". To this day he is a healthy boy (turning a very lively one-year-old next week), and it's still a mystery why he suddenly went quiet like that during the day before he was born.

But folks, I do not wish a night like that to anyone, even if it ended well. I thought I knew stress and horror, but this was a learning experience like no other. Even writing the last paragraph has me soaked in sweat, reliving some of the tension. This hopefully explains why I was abhorred yet fascinated by the film's synopsis.
Predictably when Madeline finally gave birth to her dead baby it got too bad for me. I was crying my eyes out in the cinema and trying to do it silently without causing distress to the people surrounding me. Which was hard, as trying to stop a sob is like trying to stop a sneeze: possible but painful.

So kudos to Paul Solet for making a masterfully heartwrenching movie up to that moment. When baby Grace starts to move, seemingly WILLED back to life by Madeline, it is exactly what you hope for, and you feel relieved even though you knew it was going to happen. But it is an incredibly powerful start and it left me wondering if the rest of the movie warranted this. The sad answer is it doesn't. The remainder never gives a reason for bringing out the cannons like that.

Imagine a movie with a hero and a villain. You need to have the villain do something bad so the audience knows he's a villain. In a regular action film, throwing in a twenty-minute sequence where the villain is graphically shown torturing and raping a child would be considered too strong, if all that follows is a zany car chase with a slapstick ending. The discrepancy is not that bad here but is still there. At no time does the story warrant the leaden weight of its concept. Think of a "Death Wish" movie where Charles Bronson is shown deteriorating with grief until five minutes before the end, with the last shot being him pulling the trigger for the first time, and you can imagine how unsatisfying that would be when the film so far is seemingly structured to be a great revenge flick.

It is the same with "Grace". It focuses on Madeline's hardship, but without any sort of point to work towards to, why would anyone want to watch this? Madeline has a hard time of it, being recently bereaved and having to care for an increasingly ill baby, but Solet uses convoluted subplots to keep preventing her friends from being able to help her. No matter how well acted the characters are, this neverending barrage of misery just gets ridiculous after a while. We all know where this will lead (the very movie poster is shouting it) so to allow more and more time for showing Madeline get more and more desperate without any outside help is seriously unbalancing the film. And that is a crying shame.

In the end I had to ask myself: why did I watch this? The answer: curiosity for why this was made, for what the filmmaker wanted to tell me.
Did I get satisfied? The answer: no.

As long as "Grace" keeps on being serious it is quite a gripping drama with some interesting things to say about parent-child relations. The acting in it is excellent. Unfortunately, Solet fails to end his movie in a satisfactory way, and that left me with a bad taste and a nagging feeling that the movie was a very bad joke.

Ironically the film's strong points actually help in making the experience of watching it worse than a visit to the dentist. When my heartstrings are being yanked THIS hard I expect some sort of payoff for it, and "Grace" is sadly lacking in that.

Watch the red-band trailer
More info at the Imagine website