Destroy All Monsters: Pageantry's Responsibility To Morality At The Oscars 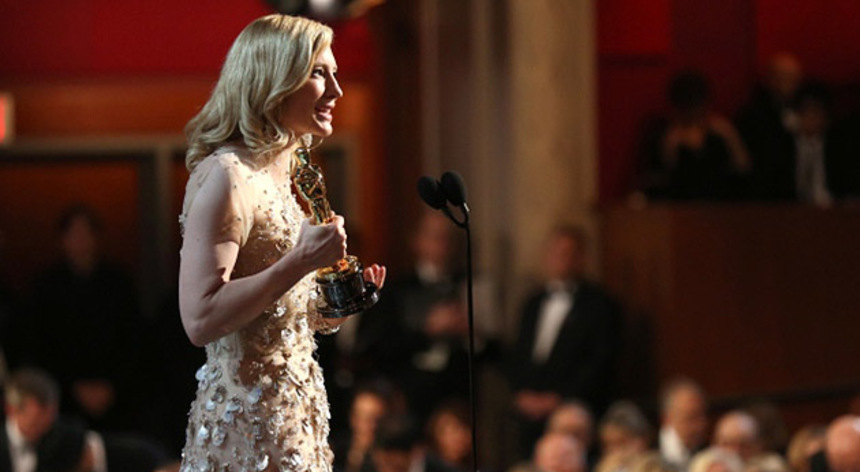 There are no two forces more fundamentally incompatible than lightweight moral outrage and Hollywood. In a way, we're already very well aware of this, eager to jump on Jared Leto for daring to besmirch his lion-tressed, doe-eyed acceptance speech with the words "Venezuela" and "Ukraine." Shut the fuck up, Catalano! Get off the stage!

And yet the media at large generated a couple hundred think pieces over the weekend about what Cate Blanchett's acceptance speech did or didn't owe, in terms of her relationship to Woody Allen; or what 12 Years a Slave winning Best Picture means about racism in modern America. It's patently ludicrous to try to chain a discussion of right and wrong in relation to modern media -- or even a bit of old school Puritan finger-wagging -- to something as intentionally anti-philosophical as the Hollywood movie industry. And yet, we always do.

The Oscars are the Hollywood film industry's annual trade awards. The Hollywood film industry is a machine designed, built, and operated for over a hundred years to generate products based on glamour, fantasy, and wish fulfillment. (Mark Cousins calls it "the bauble" in his particularly hypnotic Irish brogue, in his excellent 15-hour documentary The Story of Film, a bit of branding I've never been able to get out of my head since.)

Even Hollywood's "serious" efforts, mission movies, and self-congratulatory efforts at art, are sumptuously aesthetic and almost decadent in their moral gaze. So yes, 12 Years a Slave is an indescribably beautiful movie about an unbelievably ugly subject, every shot and frame rendered with earnest intent and a pathological inability to be anything other than artistically lovely, even while deploring its own subject.

It's the sort of movie that almost can't help but win Oscars; not because it addresses a complex and important subject, but because it does so in a way that will let the average person feel as though they've entered the thought space and engaged with the darkness, while still keeping their own hand on the tiller. They might freak out, they might say "meh," but they'll be in control of the process, because the guidelines are so clear. Hollywood and American movies have been laying them out in kind for decades.

And to be clear, I don't even have a problem with that. The best of this industry -- and I am by no means conflating Hollywood with the entirety of film; nor even the entirety of Western mainstream film -- does what it does so well for exactly this reason. A movie is a redemptive mass for the masses, and the deeper its subject is buried in our collective sense of shame, the more powerfully redemptive it can become. For all the times Hollywood movies are vehicles to pure escape, they can just as easily provide a pathway to engagement with ideas we'd otherwise not bother much with in our day-to-day lives. Long-ago moral tragedies of varying significance and complexity -- from slavery to the Holocaust to the sinking of the Titanic -- are "serious" Hollywood's particular stock-in-trade.

The actual crown of Hollywood's entire fantasy aesthetic is the Oscars. It's the nobility giving shiny golden eggs to the rest of the nobility, with the peasantry watching. It is pageantry of the highest order, flawlessly assembled, regardless of how badly the host botches the job. Like the rest of the system, it's a Hollywood engine that can't help but deliver the goods; the worst Oscar telecast in history will be just as memorable, and for the exact same reasons, as the best.

But any presumption on our part -- the audience's, or the media's -- that the Oscar ceremony can serve as a canvas for moral seriousness is flawed. This is why we boo the stars who drag their politics into their speeches, all the way back to Tim Robbins and Susan Sarandon. "Pay attention," David Letterman quipped; "I'm sure they're pissed off about something." Of all the reasons that Letterman's hosting duties were generally a better job than reported, the fact that he understood completely how vapid the Oscars truly are, as a show and a process, was the key factor.

And this is why we need to give up on wondering how or why, for example, the Oscars will address the tragic death of Sarah Jones, or (less gravely, but still seriously) Hollywood's ongoing annihilation of its own visual effects workforce. Both of these cases are definitive, and definitively reprehensible, examples of nobody in the real world wanting to know how the sausage gets made.

They belie a dirty underbelly wherein the industry has begun to buy into its own press a bit too much, thinking that the fantasy of the bauble extends into the real world and washes away the uglier aspects of the corporate world. It doesn't, and it shouldn't. But the Oscar ceremony doesn't care, nor should it, nor could it.

I admit, I took a breath when Cate Blanchett mounted the stage to accept her Best Actress Oscar. Of all the deeply complex moral issues against which the Oscar ceremony was structurally incapable of responding, the position in which Blanchett found herself was certainly the trickiest. She was wedged between the industry of her peers, the court of public opinion, and, y'know, her own right to have thoughts and feelings of her own as an adult human.

In that regard, Blanchett's speech wasn't merely adequate; it was, in its way, quite brilliant. She picked a thesis - the value and importance of complex female roles in the Hollywood film industry - and she stuck to it. She talked about the other four nominees; she thanked Allen for writing the role and choosing her for it (which, if brief and noticeably uncomfortable, was the kind of politeness I would hope we've all been instilled with, at one time or another); and then she addressed the financial viability of films like her film. And then, after the usual laundry list of personal thanks, she got the hell off the stage.

It's the best anyone could have done under the circumstances, and it's worth calling out. It's the closest an industry based entirely on fantasy can come to addressing the fact that behind its Wizard of Oz curtain, its players are human beings who are just as potentially decent and awful as the rest of us, a message 99% of its ticket-buying market wants nothing to do with. Someday, maybe someone will make a movie about it -- and then, only then, will the Oscars want to play.

Destroy All Monsters is a weekly column on Hollywood and pop culture. Matt Brown is in Toronto and on Twitter. Photo credit: Matt Sayles / Invision.

Do you feel this content is inappropriate or infringes upon your rights? Click here to report it, or see our DMCA policy.
12 Years a Slaveacademy awardsCate BlanchettoscarsWoody Allen