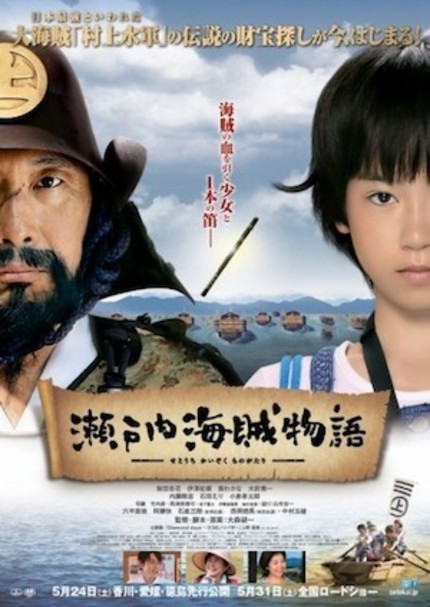 Nothing says fun like a feel-good Japanese adventure film that involves a hidden treasure and scary-looking pirates who are also samurai!
Ohmori Kenichi's Samurai Pirates is a family friendly affair that follows a group of children on the trail of a legendary treasure hidden somewhere on their island. I'm guessing it probably won't be as successful as The Goonies once was, but I can't resist the enchantingly silly charm that permeates the first Japanese-language trailer. Here's the film's synopsis:

Kaede Murakami (Kyoka Shibata) lives with her family on an island in the Seto Inland Sea. The family's livelihood is threatened when a ferry ship route to the island may be closed for good.
Her family are also the descendents of Takeyoshi Murakami. Takeyoshi Murakami was the general of samurai pirates known as "Murakami Suigun".Their group loved freedom and the sea, while they battled Hideyoshi & Toyotomi.
Meanwhile, a legend has it that the samurai pirates stashed treasures away nearby. Kaede decides to set out with three classmates to unravel the secret of the samurai pirate treasures.