Review: Tamil Terror PIZZA Deserves A Slice Of The Action 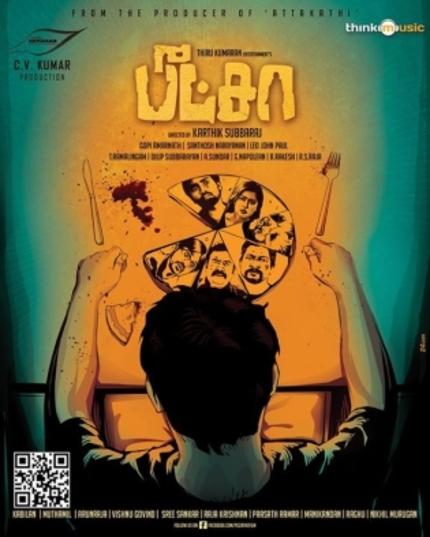 It's not the easiest thing in the world for general film audiences to adjust to the tropes and accepted suspension of disbelief that many Indian popular films demand. As a result, I find myself handing out more caveats than accolades. A great many of my reviews of mainstream Indian films follow a similar trajectory. A film may be great in the context for which it was designed and to the audience for whom it was made, but the very touches that make it a blockbuster in India often keep it from landing squarely with any other international audiences. I like to think of myself more as a curator of Indian films that a critic, my job is to point out the ones that have the potential to push beyond the Indian diaspora and into the eyeballs if the film geek community. In that vein, I have found a winner in Karthik Subbaraj's Pizza.

I first heard about Pizza when it was preparing to hit cinema screens back in 2012. I tried to read up on it, but with the Indian film industry's notoriously tight lips, I was unable to glean much more than the fact that it was a horror film, or maybe a thriller, that follows a pizza delivery man over the course of a single evening. Could be interesting, however, Indian horror films, especially contemporary ones, are invariably terrible, or so I thought. Subbaraj's twisty-turny script and the bright-eyed performance of Tamil indie darling turned marquee star Vijay Sethupathi make Pizza into something I never thought I'd see, an Indian horror film that succeeds without qualification.

Sethupathi plays Michael, a pizza delivery guy who has fallen in love with and surreptitiously wed his aspiring novelist lover, Anu. One evening, Michael is called to a ritzy bungalow to make a delivery, however, things don't go as planned when his customer winds up dead and he ends up locked inside the house with the killer. Emergency call after emergency call go unanswered as MIchael attempts to escape from this deadly trap, but soon he finds himself playing a potentially deadly game of chicken with a force that seems to want him dead. Just when he thinks he's made it out alive, he's discovered by a pair of cops who tell him that he's not been gone for a night, but for a week, and that not only are the members of the household dead, but so is his new bride, and that he's the culprit. The night doesn't seem like it could get much worse for Michael, but that's just the beginning.

Where Pizza succeeds is that it tells a story on its own terms. There are no unnecessary flourishes designed to sell soundtrack albums, there are remarkably few comedic tangents designed to lighten the mood, and the violence and gore are fairly realistic and don't defy the laws of physics in the search to address the metaphysical. Subbaraj manages to make a horror film that not only works within the frame of Tamil popular cinema by incorporating Tamil culture and Hindu mysticism, he also manages to make it broad enough that you don't need excessive prior knowledge to enjoy it, and that's a rare accomplishment.

Pizza is actually my second look at lead actor Vijay Sethupathi, but I have to say that this is a guy to look out for. He is among the most naturalistic, yet charismatic performers I've seen come out of south India in the last half dozen years, and his range appears to be endless. He can go from dour to giddy at the drop of a hat without making the audience's heads spin in the process. With performers like Sethupathi and Dhanush leading the charge, Tamil cinema, even some of the popular stuff, stands a pretty good chance on the festival circuit if programmers are willing to take some chances on genre films from a region not known for them.

Part of the reason that I've been writing so few reviews over the last several months is that fewer things have struck me as worthy of sharing as they did in 2012, but this film definitely deserves a look. It only played via unsubtitled prints in the US and even the Tamil DVD release was without any English friendly options, it has been extremely frustrating. I begged the director, the producers, the American distributors, and anyone I could hunt down to get me a copy to review. Many, many times this dogged determination has bitten me in the ass and I end up wasting three hours of my life on something that looked good in a trailer, but made me want to die when stretched out to full length, but Pizza is the real deal.
Pizza recently became the first ever Tamil film on iTunes, and not only that, the iTunes version is English subtitled AND in incredibly clear high definition. I was positively stunned by how good Pizza looked and sounded, and now, you can check it out as well. Consider this a big recommendation for a film that could have fallen through the cracks. Pizza is delicious and deserves your dollars.
Sign-In to Vote
Tweet 0 Submit