Ben Croll
Contributor; Paris
Sign-In to Vote
Tweet 0 Submit
Lars von Trier swore a vow of silence after his controversial remarks at 2011's Cannes Film Festival. You may recall him comparing himself, tongue firmly in cheek, to a Nazi during the Melancholia press conference and the whole thing then spinning wildly out of proportion. But that's another story. Now at another festival promoting another film, he is pictured with duct tape covering his mouth in press stills, and though joining for the cast photo-call, he was a no-show for the press conference that followed. (Don't worry, ye seekers of scandal, Shia LaBeouf picked up his slack.)
Despite von Trier's loudly stated silence, Nymphomaniac is not without controversy of its own. Both theatrical versions, split in half and sheered to scale by pragmatic minded producers, released in January in several European countries and scheduled to arrive stateside in March, open with a message from the director. It is a disclaimer, stating that "this film is an abridged and censored version" of the intended cut, created outside of his control and released without his stamp of approval.
The unrated director's cut premiered two days ago at the Berlinale, and is a full 25 minutes longer than the version I saw last month in France (reviewed here by our man Ard Vijn). Seeing it would promise to resolve the question about just what happened between von Trier and his producers when they very publicly took his film away. What fate befell the author's original vision? How much does the commercial cut deviate from the director's?
The answer: not that much!
The cut coming to theaters not only maintains the director's original vision, but is for all intents and purposes the exact same film. It sounds wild, but for the 25 minutes missing, there is not one sequence lost. Rather, what you have is a much tighter edit, scenes beginning and ending on beats, the movie's motor running a little bit faster. The twenty minutes added are basically padding. Conversations go a little bit deeper in this version; silent glances are held a little bit longer. 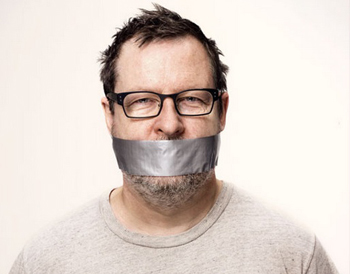 Oh yeah, silences. The Berlinale cut is much quieter a film. Whereas the theatrical starts with a jolt, opening on a shot of Charlotte Gainsbourg lying bloody in an alley while Rammstein plays on the soundtrack, this cut starts with two minutes of screen black, scored only by the sound of falling rain. When picture fades in, we continue the wet overture for another few minutes, panning along the beige walls and pooling gutters of the alley. The soundscape remains the same, in a move that only further highlights similarities to Andrei Tarkovsky's Stalker.* Only after about four or five minutes does the Rammstein begin.
Most of the additions are more subtly woven in than the altogether different introduction - like I said, padding mostly - but off the top of my head I'll try to list a few other things I recognized as new.

- In the section with Joe as a young girl, there is an extra exchange with her father (Christian Slater). They are walking in a forest and he talks about the souls of trees.

- Joe's young friend B (Sophie Kennedy Clark) stands before a group of friends and talks about the different kinds of sex she's had that week.

- A few more shots of Joe and Jerome (Shia LaBeouf) driving around in his car. At one point she breaks his taillight to get his attention.

- Joe's father is in the hospital, and she has conversation with his doctor about why morphine will not be able to help.

- Unfortunately nothing is added to Uma Thurman's hysterical and absolutely note perfect performance as Mrs. H, or even anything noticeably different about that whole sequence.

And now, the $64,000 question: is there more sex, and is it more explicit? The short answer is: Yes. The slightly longer answer is: Not As Much As You'd Expect.
As in the rest of the film, there are no new sequences. Shots in existing montages are lengthened and the camera will sometimes pan down to show more penetration, though never for longer than a second or two. The most noticeable additions are shots of oral sex. We see Joe performing it and having it performed on her in extreme close-ups. A man's orgasm plays out on his face in the theatrical cut. Here we get the money shot. A shot of cunnilingus is held so tight it goes past explicit and into Georgia O'Keefe territory. A scene of a gynecologist operating is necessarily clinical, not titillating. That's about it, really.
So where do I come down, which version do I find better? To be honest, I think the theatrical will do just fine. There's no doubt I had a better time this second time around, but that will always be the case when you see a film once in an empty theater all alone, and another time at a world-premiere, alongside a thousand other people equally excited to be there. The director's cut is certainly a roomier affair, one with a little more space to breathe, but is also only half a film. Nymphomaniac is not like Lord of the Rings or Kill Bill, films with built in climaxes and end points. Vol. 1 just sort of stops abruptly, and Vol. 2 picks up at the exact moment it left off.
The controversy over a truncated cut is rather overstated. The dichotomy isn't between an artist's full statement and the forces of callousness and cynicism trying to stifle it, but between having half a film at a flabby 145 minutes, and having a finished film, at 240 min, that sizzles. Lars von Trier knows that.
And all that talk of censorship and compromise? Looks like the master prankster has got us again. No vow of silence was ever going to keep this provocateur down.
---------------
* von Trier has already made his love for the Russian director known, having dedicated Antichrist to his memory. For a large portion of Stalker, three men sit talking in a wet industrial waste-scape, with one man representing Faith, one Science and one Art. Nymphomaniac is basically two people in a room talking, one representing the physical, the other the cerebral.
Sign-In to Vote
Tweet 0 Submit

Do you feel this content is inappropriate or infringes upon your rights? Click here to report it, or see our DMCA policy.
Lars von TrierRobby D.Raven AlexisBreanne BensonTori BlackMick BlueAdult

That is bizarre: the version I saw here, in Rotterdam, had no statement from Lars at the start, and definitely the longer beginning, with blackness, extensive rain, and Rammstein coming in at 5:00.
And it also had the soul of trees bit, B talking about sex...

Yet I'm not sure I saw all of the extra scenes you mention, smashing taillights and such. Also, no moneyshot, and I'm not sure there was any true penetration in Part 1 at all to be honest.
Are there even more versions than two?

That is strange. The stuff about the beginning, that is. Maybe there are different cuts for different places.

I mean, the version I saw in Paris, the disclaimer at the beginning was in French, and the review in Variety mentions them too (I imagine its in English), so we know for certain there are at least two slightly differing versions.

W/r/t the soul of trees bit, and B's talking about sex, it's not that those scenes are cut in the theatrical, they're just a bit shorter. Maybe I should have been a bit clearer - those are just a few sequences that are noticeably longer in the uncut.