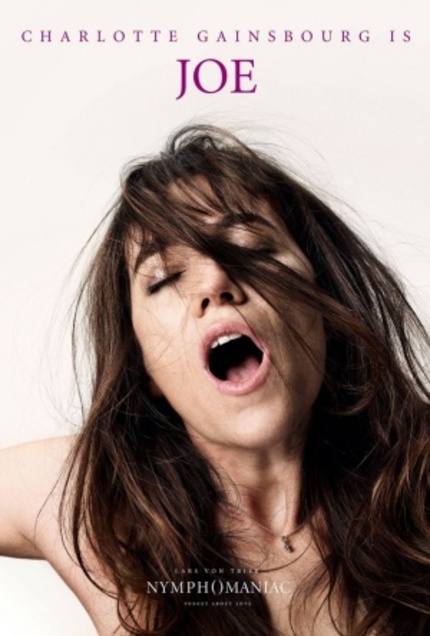 These two things are very much at odds with one another. I have nothing but good memories of his work, and with every new project of his I hear about I feel excited at the original premise. So why am I not enticed more when a new film by him finally appears in the cinema?
Take Antichrist: Lars Von Trier doing horror? I'm in! I hear it's about a couple grieving over the death of their child, followed by genital mutilation? I'm out!
Take Melancholia: Lars Von Trier making end-of-the-world sci-fi with colliding planets? I'm in! I hear it's a look at clinical depression from the viewpoint of someone who is depressed? I'm out!

Now take Nymphomaniac: Lars Von Trier makes a pretty hardcore film about sex, with famous actors? I'm in! I hear it's a five-hour-long collection of short stories told by a severely beaten up woman? I'm... well...

Ok, I was still intrigued of course. Here at ScreenAnarchy we all had a lot of fun already with the brilliant Nymphomaniac ad campaign, and by sheer chance I'm the first writer here who has the film playing at his local cinema. Internet-surrounded by so many jealous colleagues worldwide who are dying to see it (but can't yet), it felt cruel and wasteful not to take this opportunity. So this evening I sat down to see Part 1 (of 2) of Nymphomaniac.

The setup for the story is this: one snowy evening, a lonely man called Seligman (Stellan Skarsgård) discovers a beaten-up woman called Joe (Charlotte Gainsbourg) outside his house, and takes her in. Joe tells Seligman she is a bad person and when he asks why, she begins telling him stories of her life as a nymphomaniac.

That's where I end plot-wise as I do not want to spoil anything. Suffice to say that the stories are very different from each other, in style, color, mood. Joe keeps pointing out how bad she is, Seligman keeps telling her that her actions are not innately evil, and shows common non-sexual examples to bolster his arguments. 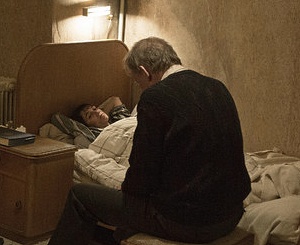 By now this probably starts to sound like a somewhat dirtier version of Frank Capra's It's a Wonderful Life, and that influence is certainly there. But there is also an undercurrent of strife between Joe and Seligman, both not necessarily liking each other much, yet compelled to win the other over to their own view.

In his earlier films, Lars Von Trier showed that he was able to explain some pretty unique viewpoints to his audience, making people follow a kind of logic they normally would not employ. His approach reminds me of the book "Gödel, Escher, Bach" by Douglas Hofstadter. In that book, Hofstadter showed that Bach and Escher were able to create beauty out of something incomprehensibly complicated. And he used Gödel's math as proof that the mystery element wasn't so much the complexity, but the impossibility to explain the complexity.

In Nymphomaniac, Lars Von Trier ditches Gödel, ditches Escher, keeps Bach (and adds Rammstein), but does the same thing: in a round-about way he describes something in humans for which there are no straight answers. At least I think that's what he does: I can, of course, only be sure after having seen Part 2 as well.

Whether I'm wrong or right, Nymphomaniac Part 1 is a pleasure to watch. It is a very sensual film from the first shot onward: even before the first actor is seen, Von Trier already plays with sounds and images, making a beautiful audiovisual event out of snow melting in a dark, dirty alley. In those first few minutes, you cannot help but wonder: if this is already so wondrous, so sensual, so beautiful, what will happen when we get to people having sex?

This goes for all actors, by the way. Lars Von Trier gives everyone moments to shine, including actors like Christian Slater and Shia LaBeouf, using their strengths rather than trying to over-reach on their weaknesses. Shia is delightfully dim and bland, and intentionally so I should add. Stellan Skarsgård and Charlotte Gainsbourg are excellent, but from them we'd expect no less. A special mention must be made of Uma Thurman. If you liked the glimpses already shown of her chapter, rest assured she is fantastic here, being very sad and very funny at the same time.

As I write this, the clock here in The Netherlands has crept past midnight. This means that later today, Nymphomaniac Part 2 will be premiering. My initial plan was to wait a week before catching it, to fully be able to mull over Part 1 in my mind. But now I don't think I can wait so long. I want to know what further happens with the conversation, the battle of wits and empathy between Joe and Seligman. The short preview at the end of Part 1 shows that Joe will start to tell stronger stories, fouler ones, enough so to make me worry.

Then again, it may be that Lars Von Trier is just fucking with us here. Part 2, hopefully, will tell!


(UPDATE: Indeed I went to see Part 2 the next --or technically the same-- day, and here is THAT review...)